In honour of Sámi National Day (Feb 6), we visit Helsinki’s only Sámi daycare and also look at how Sámi TV is expanding.

Sámi language nest: Máttabiegga daycare in Helsinki lets kids become immersed in the language of northern Finland’s indigenous Sámi people, some of whom live in the capital.

New initiatives provide a welcome boost for the ongoing revival of the languages of northern Finland’s indigenous Sámi people, who celebrate their national day each year on February 6. We visit Helsinki’s first Sámi daycare and also look at how Sámi-language TV programming is expanding.

The Sámi homeland stretches across northern Finland, Sweden and Norway and a corner of Russia. Today many Finnish citizens with Sámi roots live in other parts of Finland. A new kindergarten called Máttabiegga Giellabeassi (South Wind Language Nest) recently opened in the Deep South – that is to say, Helsinki – where young children can now be immersed in the Sámi language.

“We joke that Helsinki is the biggest Sámi village in Finland, since about 1,000 Sámi live in the Helsinki area, having come here to work or study,” says Ida-Maria Helander, one of two kindergarten teachers at Máttabieggam, which opened at the end of 2013. “People are very pleased with this new opportunity for their children to learn their ancestral language – and they’ve also been impressed by the nice furnishings and materials we have here.”

Máttabiegga is built on a model for the revivalist teaching of minority indigenous languages called a “language nest,” first devised in New Zealand for children of families with Maori roots. “We speak only Sámi to the kids, playing games, singing songs and teaching them new words, though they may answer in Finnish or Sámi as they prefer,” explains Sivi Jomppanen, Máttabiegga’s other teacher.

“We try to teach them about Sámi culture too. In Sámi families children are expected to join in more often in what the adults are doing, and our kids help us a lot with things like baking and tidying up toys.” 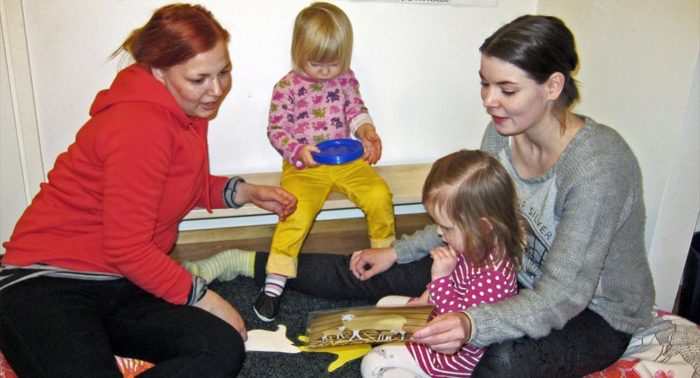 Máttabiegga is housed in a comfortable converted apartment. At the time of our visit in January 2014, it already provides daycare and language immersion to four children between the ages of one and four. Helander and Jomppanen expect all of the kindergarten’s eight full-day places and two half-day slots to be filled by the end of 2014. When accepting new children, the daycare aims to prioritise kids who have Sámi family ties.

The language nest was established using funds from the Finnish Cultural Foundation and is run with funding from the Ministry of Education channelled through Finland’s Sámi Parliament and the City-Sámit organisation, which brings together Sámi living in the Helsinki area.

“We’re excited about the future, since Máttabiegga has been such a success,” says Helander. “We hope similar Sámi-language nests will soon be set up in other cities like Rovaniemi and Oulu.”

Two-year-old Áile seems happy in her Sámi surroundings, pointing at pictures of animals and telling us their names in Sámi: bussá (cat), beana (dog) and boazu (reindeer). For ten phrases in Sámi, Finnish and English, see our article Say your first words in Sámi. 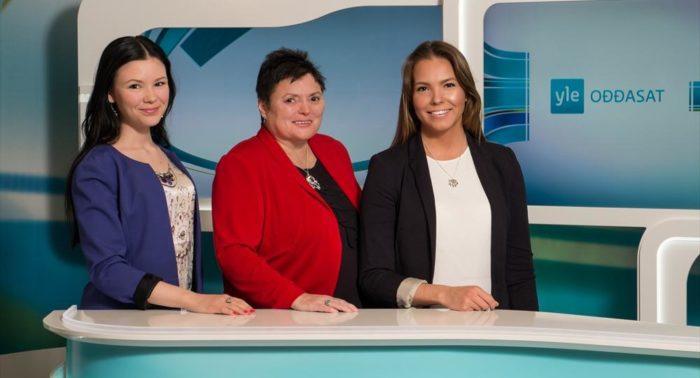 The 2013 Sámi Language Achievement Award was subsequently granted to Yle Sápmi by the Sámi Language Council. “We’re very pleased that our own community has recognised our efforts to renew and expand our programming and make our own TV news,” says Pirita Näkkäläjärvi, head of Yle Sápmi.

The family of Sámi languages once included ten distinct variants, of which at least six still survive. Yle Sápmi additionally broadcasts about eight hours of radio programming each weekday – mainly in the most widely spoken Northern Sámi language, but with items increasingly also produced in the minority Inari Sámi and Skolt Sámi languages, which are also spoken in Finland but have just 300–400 speakers each. The Skolt Sámi cultural association Saa’mi Nue’tt consequently named Yle Sápmi the 2013 Skolt Sámi of the Year.

Näkkäläjärvi explains that by promoting these minority-within-a-minority languages, Yle Sápmi aims to break down barriers by helping speakers of Finland’s different Sámi languages to understand each other better, rather than having to communicate using Finnish.

“We’re also hoping to expand our programming for children,” says Näkkäläjärvi. “We have a fine new studio for the popular children’s TV programme Unna Junná – broadcast nationwide on Yle Channel Five – which has played a vital role by making Sámi children more visible. And we’ve already given more time to our popular and creative radio programme for young people – Sohkaršohkka (Sugar Shock).”