In the lakeside village of Inari in Finnish Lapland, Finland’s indigenous Sámi people celebrate as a new, distinctive landmark joins the landscape: Sajos, a Sámi cultural and political centre.

This striking building has been created partly to provide a permanent home for Sámediggi (Sámi Parliament), which represents Finland’s Sámi in national and international forums, and resolves issues concerning Sámi languages, culture and rights. The territory of the Sámi, Europe’s only indigenous people, also stretches through northern Norway and Sweden and into a corner of Russia.

Sajos (which means “base camp” in Sámi) also houses the new Sámi Cultural Centre, encompassing a 430-seat auditorium that can be used as a theatre or concert hall; meeting rooms for local associations; classrooms for adult education; a Sámi social services centre; the Sámi archives; a library; and a shop specialising in Sámi books and handicrafts.

“The opening of Sajos represents a great new opportunity for us Sámi, providing an ideal venue for all kinds of cultural events,” says Sámi singer Anna Näkkäläjärvi, whose band Ánnámáret Ensemble performed at the building’s official opening ceremony on April 3, 2012. The event was timed to coincide with the inauguration by Finland’s President Sauli Niinistö of the newly elected 21-member Sámi Parliament, which will serve for four years.

Näkkäläjärvi manages the Sámi Music Centre, which is also based at Sajos. Like other Sámi musicians, Ánnámáret Ensemble are proud of their roots and the haunting sounds of traditional Sámi singing styles, but not afraid to mix in influences from other musical cultures. “It’s important to do this to keep our own culture truly alive,” explains Näkkäläjärvi.

Meeting under a single roof

“This is the first time that Finland’s Sámi have really had our own house where we can gather under one roof,” says Sajos’s manager Marja Männistö.

“It felt wonderful when we had 450 Sámi children singing together here in March for a children’s arts event – and I’m really looking forward to the music festival of indigenous peoples, Ijahis idja (Nightless Night) which we host in August, welcoming guest performers from other indigenous peoples as well as Sámi musicians.” It is hoped that Sajos will also reactivate a Sámi theatre tradition that has recently suffered due to the lack of a suitable arena.

“We’re also producing school books here in all three of the distinct Sámi languages spoken in Finland,” adds Männistö, who is a member of the Skolt Sámi – a minority within a minority. Skolt Sámi is today spoken by only about 300 people in Finnish Lapland, while Inari Sámi has some 300 speakers and about 2,000 people speak Northern Sámi. The municipality of Inari uniquely has four official languages – the three Sámi languages and Finnish.

Forms from nature and Sámi traditions 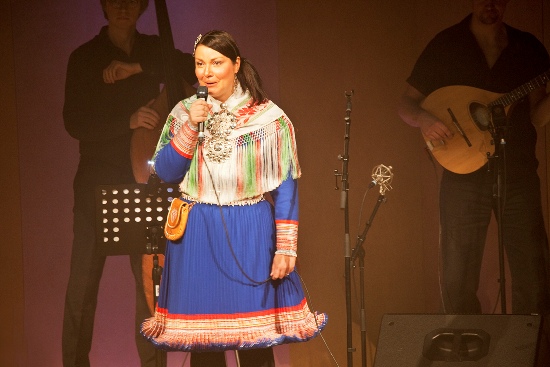 Sajos is a truly eye-catching work of architecture, clearly influenced by northern natural scenery. The building’s curved walls are made of local pine, birch and spruce.

The floor-plan resembles a traditional four-pointed Sámi four-winds cap, and the shapes of internal spaces echo other traditional Sámi objects, structures and motifs.The Parliament chamber resembles a giant oval shamanistic drum. It has separate cabins for interpreters who translate between the different Sámi languages during parliamentary sessions.

The 15-million-euro cultural and political centre has been built with funding from the Finnish State and the European Regional Development Fund.

Männistö also enjoys the view from her new base across the River Juvduu to another attraction in Inari: Siida, the Sámi Museum and Nature Centre, whose exhibitions give colourful and atmospheric insights into life in Finland’s far north.

“Siida features our history and our natural surroundings, and we’re delighted that Sajos now gives us a fantastic centre for contemporary Sámi culture, too,” says Männistö.