More of Finland’s indigenous Sámi people live in the Helsinki area than in any single locality in their arctic homeland, but they face challenges in maintaining their language, culture and identity.

Like many Sámi living in the Finnish capital, Pirita Näkkäläjärvi, 30, left Lapland in her teens to study. Today she works as a globetrotting mergers and acquisitions specialist based at Nokia’s headquarters just outside Helsinki. Whenever possible, she heads north to attend Sámi festivals and spend time with her family, who raise reindeer and run a chain of souvenir shops in Inari, Ivalo and Levi.

Näkkäläjärvi feels no ambiguity about her dual identity. “I’m Sámi first, but also proud to be a Finnish citizen,” she explains.

When Näkkäläjärvi started to feel detached from her roots after a couple of years down south, she founded the youth section of the City-Sámit association. “For 20 years City-Sámit has helped Sámi in Helsinki to remain connected to our culture,” says Näkkäläjärvi. “I really look forward to our gatherings and the chance to speak my own language.”

One annual highlight is Sámi National Day, February 6, when the city Sámi gather in their colourful costumes to fly the equally colourful Sámi flag outside Helsinki University, and proudly sing the Sámi anthem.

“Last February I was delighted to see that our flag was also flying outside Helsinki City Hall,” remembers Näkkäläjärvi. “It’s good to get media recognition for Sámi issues at least once a year – and my colleagues at Nokia often come and congratulate me after noticing the occasion in their Finnish calendars.”

Music from yoik to rap 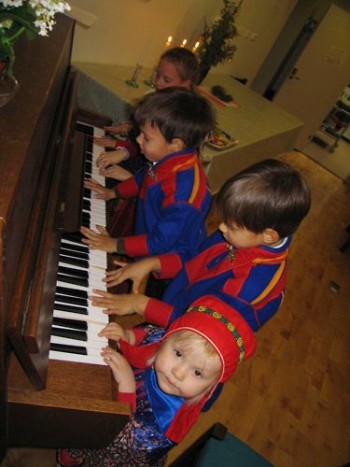 About 1,000 of Finland’s approximately 8,000 Sámi live in the Helsinki area. Many regularly show up at cultural events organised or attended by City-Sámit, such as concerts by visiting Sámi rapper Amoc or the heavy metal Tiina Sanila Band. The Helsinki-based folk group Angelit also spotlights Sámi culture in the south with a unique fusion of modern pop and haunting Sámi yoik-singing.

“It really takes an effort to hold on to your culture and language if you live outside the Sámi homeland region – especially for parents wanting to pass on their identity to the next generation,” says Näkkäläjärvi. “We’ve successfully campaigned to get a Sámi children’s TV program shown, but it’s been hard to keep a Sámi-language kindergarten going.” 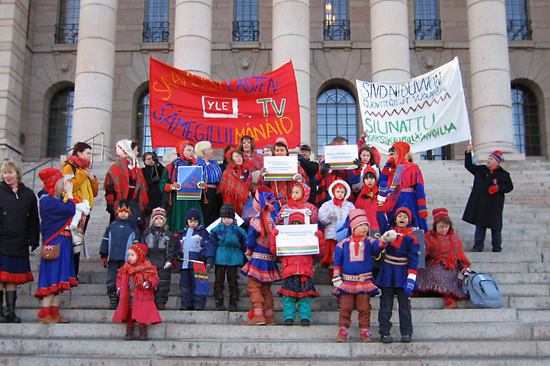 In 2005 Sámi demonstrated in front of the Parliament, for Sámi-language kids’ TV shows.Photo: Outi Pieski

Sámi culture has only been kept alive in Finland’s deep south thanks to the efforts of volunteers. Näkkäläjärvi would like the Inari-based Sámi Parliament of Finland to provide more support for Sámi exiles. “I am afraid that the Sámi living in the south will assimilate and turn into Finns if nothing is done by the authorities,” she says. “Our small nation cannot afford to lose anyone!”

Näkkäläjärvi also supports the Sámi Parliament’s campaign for land rights in the Sámi homeland region, where forestry and mining interests often conflict with traditional reindeer herding. Finland has repeatedly been criticised by organisations including the United Nations for not fully recognising the Sámi’s rights as an indigenous people. Näkkäläjärvi hopes that such conflicts can be resolved peacefully, stressing that there should be enough room in Lapland for everyone.

“The Sámi in Finland are not badly off compared to indigenous minorities in other countries, as we have the same standards of living, health and education as Finns,” she explains, “but we still face typical problems like land rights, losing young people to the cities and a struggle to maintain our language and culture.”