Linguist Sjur Moshagen knows that even a spellchecker can help keep a language in use.

After this article, your spellchecker’s red lines will never seem the same again.

Spellchecker – it seems like such an insignificant thing, doesn’t it? It’s not often you click on “Check spelling” and think, “This function is a small part of a larger effort to help this language survive for the next generation.”

But that’s precisely how Sjur Moshagen and his colleagues think. A Norwegian linguist who lives in Helsinki, Moshagen develops wordlists and source code for computer spellcheckers in the Sámi languages. “The most important thing is of course that parents speak Sámi with their children,” he says, “but a spellchecker can play a big role for a language.”

A word about language

Perhaps a word about the Sámi languages is in order here. They are distantly related to Finnish. Moshagen uses the plural, “languages”, since ten dialects exist or have existed, some so distinct that experts may refer to them as separate languages.

Six variants of Sámi are still spoken, while the others have become extinct or are used by only a handful of people. The Sámi-speaking area covers the roof of Europe, stretching over Norway, Sweden, Finland and a corner of Russia. Those countries’ majority languages overlap the region.

The project that employs Moshagen is sponsored by the Norwegian Sámi Parliament and a couple Norwegian government ministries. It began in late 2004 and by the end of 2007 the team had completed spellcheckers for Northern Sámi and Lule Sámi. Funding was renewed and they are now working on Southern Sámi.

Whether you speak Sámi or not, you still know what that red line means.

From an English-speaking or even a Finnish-speaking point of view, it might be hard to grasp the significance of a spellchecker. After all, English speakers have had spellcheckers since the dawn of word processing. You know, back when there was no internet, remember? Oh well, never mind about that.

The point is that Sámi children, even if they come from households where the language is strong, will soon get older, look around and ask, “Where else can I speak Sámi?” Computers are everywhere in our digital age, and if Sámi can be used accessibly in digital communication, then it will feel as natural to use it for email, chat sites and other online stuff as it does to speak it with parents or grandparents.

Moshagen notes that this is already happening. “There are Sámi-speaking online communities and a lot of young Sámi people not only speak Sámi daily, but write it too,” he says. Still, many Sámi speakers are not used to writing their language.

Why? For many decades, the Sámi and their language were marginalised by the Nordic countries’ majority populations. Many Sámi resorted to using their own language only at home, if at all. According to Moshagen, the situation began to improve in the 1970s in Norway; Sweden and Finland are generally thought to lag behind their neighbour in this process.

He sees spellchecker as a source of support for those who know Sámi but have trouble writing it, whatever their age: “They can easily see when they’ve written something wrong, correct it and keep going.” 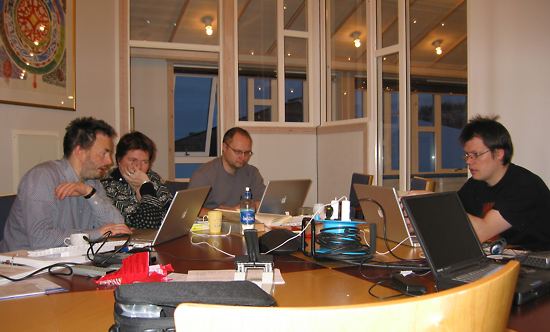 “There are many heartrending stories of parents who chose not to speak Sámi with their children,” Moshagen says. “This shows how enormous the societal pressure must have been.”

Attitudes are changing and now many young parents of Sámi origin, even those who don’t know Sámi themselves, are demanding that their parents speak Sámi to the grandchildren. “You can skip one generation, but not two,” says Moshagen.

He says the spellchecker can form the basis for further projects. Next in line are grammar checking and speech synthesis (the computer reading text aloud). The same technology could easily be put to use in mobile phones for predictive texting.

Nokia, and that other company with the vaguely Swedish name, are you listening? And by the way, when will we be able to google in Sámi?