Berries in the limelight: Finnish berries form a local superfood that is rich in vitamins and makes a tasty dessert as well.

Helsinki’s Johan & Nyström café serves up Finnish berries and raw food in a delicious array of sweet and savoury treats that are good for you.

A gorgeous row of cakes lines the glass display case. Beside a black currant and chocolate cake are creations made from Finnish berries such sea buckthorn, cranberry and cloudberry, and other ingredients including black liquorice root.

As a well-travelled café goer, there are two immediate surprises in store for me. The first is that all of the delicious cakes here are good for you. The second is that I can eat them, as they are gluten-free. This makes me ecstatic. More often than not, very few gluten-free options exist on café menus in a world where the majority of baked goods contain wheat.

“That’s a common reaction,” says owner and barista Pasi Kokko, with a laugh. “Not only are the cakes healthy, they’re gluten-free, and that amazes people who are used to not having much choice when it comes to gluten-free options.”

Super foods, natural alternatives to processed foods, are on the rise in Finland. It’s a growing trend to choose nutrient-rich ingredients such as vitamin-loaded local berries, and to eat raw food that is not only uncooked but also unprocessed and often organic.

Finland’s abundance of forests and fields, as well as Everyman’s Right – under which every man, woman and child is allowed to pick wild berries and mushrooms anywhere in the land so long as they are not too close to someone’s home or farm – mean that it’s easy to eat well. 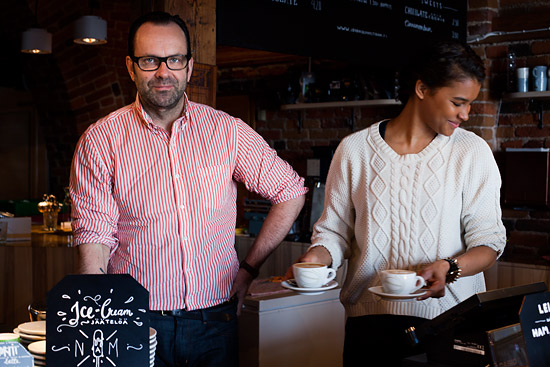 “I’d rather have one cup of good coffee or tea than seven bad ones,” says Kokko, summing up his café philosophy for the high-quality coffees and teas he serves. Eighty-five percent of the coffee is direct trade, which means that it’s purchased directly from the bean farmers.

Located near Uspensky Cathedral in the Helsinki neighbourhood of Katajanokka, Johan & Nyström is housed in a 19th-century brick warehouse that was once home to the Russian tsar’s stables. These days the renovated space is full of light and colour and the aroma of freshly brewed coffee.

Johan & Nyström’s popular raw food brunches, held every second Sunday, sell out well in advance. “We have all been surprised by the positive raw reception,” says Kokko, who credits his yoga instructor Magnus Appelberg with introducing him to the world of raw food. 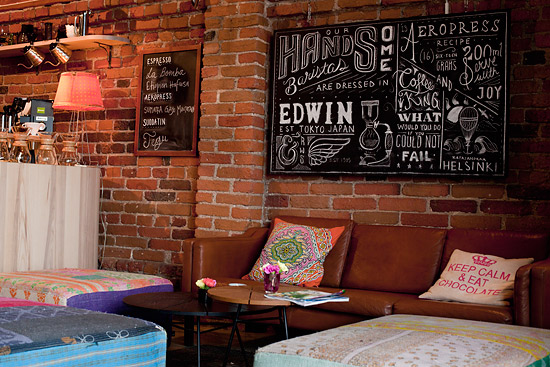 Johan & Nyström is housed in a 19th-century brick warehouse that is now full of light, colour and the aroma of freshly brewed coffee.Photo: Susanna Alatalo

In summer, an outdoor waterfront patio overlooks the boats moored in the Baltic, with chairs and tables in bright pinks, yellows and greens. The patio furniture, like much of the interior, has been locally sourced. Kokko is a believer in working with independent local firms, whether he’s ordering interior design elements or desserts. The latter come from gourmet cake maker Suvi Tikamo.

“Small things become big things when people choose what they consume and where or whom they purchase it from,” says Kokko.

He officially took over as the café’s owner in December 2012. Previously, the establishment was the Swedish roastery firm’s Helsinki office and occasionally open on Saturdays as a café. The roastery still provides coffee for many other Finnish cafés and restaurants.

Formerly a professional photographer, Kokko is enjoying his second career as a barista and entrepreneur. The café has also become a family business as Kokko’s wife, Liisa, a stylist and journalist, helps out on the weekends, and the couple’s grown-up children also work there.

Their clientele is a mix of regulars, both locals and tourists, many of whom request something distinctively Finnish. This factor has helped shape the Scandi-inspired menu. One Spanish couple was so impressed by the black liquorice root cake that they came back to thank Kokko personally.