The Finnish high school graduation cap is more than just a white hat with a narrow black visor, and its use isn’t limited to graduation ceremonies. The subtleties and peculiarities of this particular headwear need some explanation.

The moment of truth: At a Finnish high school graduation ceremony, the students all put their white caps on at the same time, when the principal declares them fully qualified graduates.

High school graduation takes place when the school year concludes at the end of May or beginning of June. And yet, a month before that, on April 30 and May 1, you’ll notice merrymakers of all ages wearing white caps – and partying to a degree rivalled only by New Year’s Eve.

It’s somehow paradoxical that the Finns wear a kind of uniform at the one time of the year when it’s socially acceptable for them to lose their inhibitions. The May Day holiday, known as Vappu in Finnish, and the evening that precedes it are the closest thing the Finns get to a wild, unfettered carnival.

The weather might not always be appropriate for a festival of spring, but do they don feathers or crazy costumes to match their festive, wild mood? No, they wear nice white student hats.

The resulting sea of bobbing white caps might make you feel a bit puzzled, or even uneducated, once you discover that the hat symbolises the wearer’s status as a high school graduate. The fact that so many people possess them is perfectly logical in view of Finland’s world-beating reputation for education, of course.

And woe betide anyone who dons the cap without due qualification. I know of at least one ungraduated person who attracted some serious disapproval when he jokingly sported his wife’s cap on social media. OK, I confess: It was me. 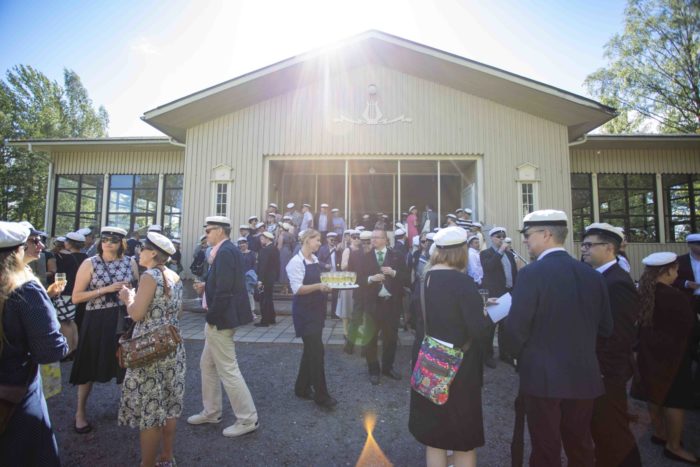 People save their high school graduation caps and bring them out for certain special occasions, such as May Day festivities or university ceremonies (in this case a graduation celebration at the University of Tampere). Photo: Jenni Toivonen/Visit Tampere

These days, the cap rarely comes out of its box at any other time of the year but Vappu and the occasional academic ceremony or official function. However, time was that people would pop them on their heads every day throughout the summer to until the end of September, so they were an optional accessory until the 1950s. Nobody bothers to wash their hats, and this might account for the distinctive yellow hue of the more vintage specimens.

The graduation cap usually bears the emblem of the University of Helsinki, which is Apollo’s lyre, a symbol of the Greek patron god of music, dance and poetry. Originally, and until Finnish independence in 1917, the university entrance exam was equivalent to the national matriculation exam.

The contemporary hat-wearer affixes the insignia of his or her own university. The size of this emblem had a subtle 19th-century political potency that persists to this day, since its size indicates whether the owner is a speaker of Finnish (14 millimetres) or Swedish (22 millimetres); both are official languages in Finland.

To complicate things further, students at technical universities sport a variant with a long black tassel and an emblem specific to each university. Except for students of the University of Oulu, who insist on complicating things even further by wearing emblems that indicate their study programmes. The inside linings of the hat also vary in colour depending on the home region of the person who is wearing it, as well as the Finnish- or Swedish-speaking background of the student.

Freedom and a bright future 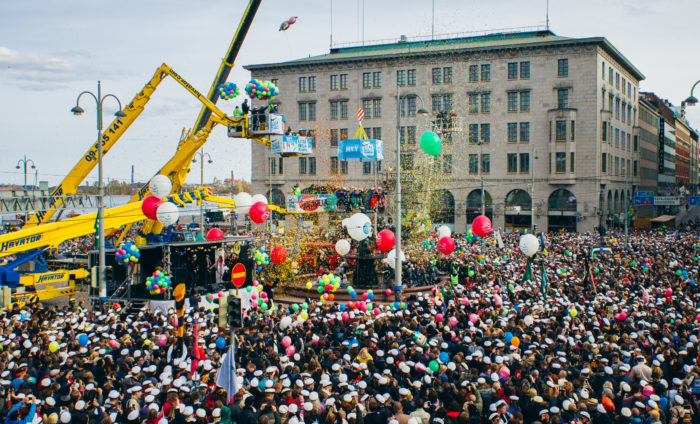 Helped by a crane, students place a graduation cap on the head of Helsinki’s Havis Amanda statue every April 30, amid a sea of thousands of similar hats.Photo: Jussi Hellsten/Helsinki Marketing

The Nordic countries all have similar student-hat traditions. As an emblem of educational status, the Finnish garment is reputed to have specific roots in the period of Russian rule in the mid-1800s. Tsar Nicholas I stipulated that all university students should wear a uniform, but when the tsar died so did the habit of wearing the uniforms – apart from the hat, which in those days was blue. Women weren’t invited to join this millinery club until 1897, when they were admitted to the students’ union.

Perhaps to compensate for this gender-based tardiness, one of Helsinki’s best-known women is now the first to be anointed with this singular headgear item every Vappu. A group of students symbolically wash the Havis Amanda statue near Market Square – spring cleaning – before placing a ritual graduation cap upon her head.

The annual honour, bestowed since 1921, is carried out by a different Helsinki student union each year. Thousands of people turn up to watch the ceremony and cheer.

So what does the white hat signify to the locals? “To me, it means possibilities, freedom, a bright future and an achievement,” says 35-year-old Eveliina Lehtonen, reminiscing about her own matriculation but also pondering the lasting significance of this happiest of hats. “And at Vappu, it still always means spring has come and it’s time to party.”

Finnish tradition dictates that in mid-February, students in their last year of high school start their study break with a great big party. Meanwhile, the students below them celebrate their new status as the eldest kids in the building by dancing.

Learn by association at Finnish universities

We look at the role of student associations in Finnish student culture: events, parties, sports, even career skills!