Finnish tradition dictates that in mid-February, students in their last year of high school start their study break with a great big party. Meanwhile, the students below them celebrate their new status as the eldest kids in the building by dancing.

High school students in the central-western Finnish city of Tampere parade through town in a caravan of open-bed trucks in “penkkarit,” a party tradition that takes place before they settle in to study for their final exams.

What would you think if, in your hometown, a caravan of dozens upon dozens of open-bed trucks drove slowly past, each full of teenage students, many of them in costume, making noise and throwing handfuls of candy to the gawking spectators on the roadside?

That’s what happens each year in Finnish towns on a Thursday in mid-February, when students in their third and final year of upper secondary school (high school), conclude their last courses and begin a study break before their final exams. The break lasts four to six weeks, depending on what subjects they are taking. But prior to studying, they party. The adjective generally used to describe the event is “carnival-like.”

This is penkkarit in Finnish, short for penkinpainajaiset. If that means nothing to you, try Finland’s other official language, Swedish: bänkskuddagillen. If you still don’t get it – and why would you? – picture a bench (penkki, bänk), like the name says. It might be a school bench, or it might be a seat on a train leaving town for the study break. You’ll get different information from different people, but all you really need to know – and all most people really know – is that it’s a party. 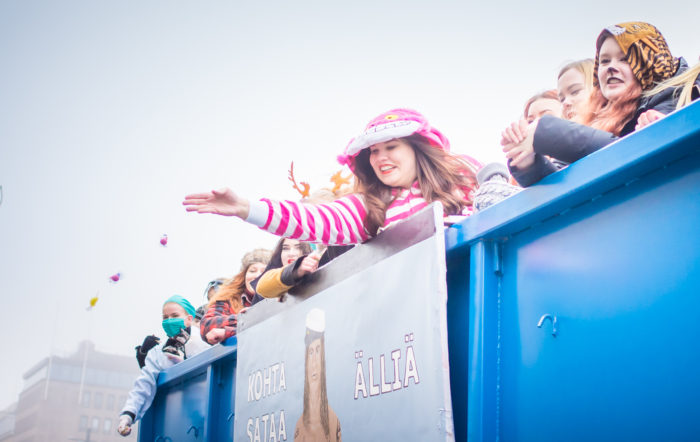 Sharing the fun: All over Finland, costumed students in caravans throw candy to the crowds.Photo: Laura Vanzo/Visit Tampere

The tradition apparently started in Helsinki and gradually spread to the rest of Finland. Estimates about the date vary, but it goes back to at least the early 1900s, if not farther. And back in those days, they used to ride around town on a horse-drawn sleigh. After the Second World War, the ritual grew to include the carnival atmosphere and the candy.

Why is it such a big deal? After all, they aren’t out of school yet – they still have to get through their matriculation exams.

It’s an important milestone – some might even say a rite of passage. The tests are still hanging over their heads, but these kids – well, they’re almost adults, aren’t they? – will never again have to attend a high school class. They’re 18 or 19 years old, and they’ve been waiting for this day for a long time.

As the teens ride through town, laughing, screaming and throwing candy, the smaller kids among the onlookers scramble to gather up the goodies. Maybe those little children are thinking, “One day that’ll be me up there!”

Wait, could this be the secret to the famously successful Finnish school system, a way of instilling enthusiasm in pupils from an early age? (A carrot usually does work better than a stick.)

Many schools post video coverage of their second-year gala. The students show off ballroom dances, but they also perform a modern choreography to pop music, usually as the grand finale.
Video: Tapiola High School

Meanwhile, back at school, one-third of the student population is suddenly gone. The second-years waste no time in celebrating the fact that they are now the new royalty of the school. The following day, they hold a fancy ball for themselves and their parents.

This is Vanhojen tanssit, literally the Dance of the Old, and it’s a tradition that’s almost as old as penkkarit. The second-years are simply declaring that they are the eldest students left.

The name also fits well with the old-fashioned dresses and suits that participants used to wear to the ball, although nowadays most of the dresses are more glittery and gaudy than people probably could have imagined back when the tradition began.

In many cases they have trained for months, learning the Viennese waltz, the foxtrot or other venerable dances, not to mention the tango, which holds a special place in Finnish hearts and culture. There may be some traditional folk dances thrown in for good measure, and many classes also concoct a choreography set to modern pop music to top it all off.

Their parents come to watch and applaud, and afterwards it’s time to enjoy a fancy dinner.

All of these parties – and the academic work, of course, don’t forget that – form integral steps in the progression towards receiving a white cap with a narrow black brim, called a “student cap.” That hard-won hat means you’ve graduated – but that’s a story for another time. The party’s not over yet.