Finnish Prime Minister Sanna Marin and her colleagues held a press conference to answer children’s questions about the coronavirus situation.

Since mid-March 2020, almost all of Finland’s schoolchildren have been distance learning, logging on to online lessons at home, because of measures designed to slow the spread of Covid-19. At the time of writing, the earliest estimated possible return to normal, brick-and-mortar schools would be in mid-May.

Most children are now used to attending class video conferences and handing in essays online. Many teachers gave their students a unique assignment on April 24, 2020, telling them to tune in to a press conference and listen to Prime Minister Sanna Marin, Minister of Education Li Andersson and Minister of Science and Culture Hanna Kosonen.

This wasn’t just any media event – the reporters asking questions via videolink were kids.

This was the Finnish government’s first press conference for children. Kids could hear reporters their own age voice the concerns that are on the minds of Finland’s more than half a million schoolchildren.

And the ministers looked straight into the camera and answered.

Questions on our minds 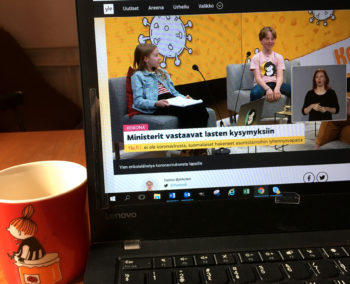 In the Yle studio after the press conference was over, Emma and Aaron admitted that they’d been a little nervous about asking the prime minister questions on national TV. The onscreen headline says, “Ministers answer children’s questions.”Photo: ThisisFINLAND.fi

Seven kids asked the questions, with different media outlets represented. Emma and Aaron were sitting in the Galaxi studio at Yle, the national broadcasting company, while Valdemar and Nuutti asked questions from their homes on behalf of Lasten uutiset (Children’s news), a department of the daily Helsingin Sanomat.

The issues ranged from, “When can we go back to school?” and “Will we be able to go to the amusement park this summer?” to “When can we visit our grandparents and other somewhat older relatives?” and “What can we do if we’re feeling stressed or scared because of the situation?”

No doubt many parents and grandparents were also watching with interest. After all, they have been fielding their children’s questions, too, and some of the questions are universal, regardless of age.

“How long do you think it will be until corona is over and everything is back to normal?” asked a girl named Ia.

Andersson answered, “That’s a very good question that Ia asked, but it’s also very difficult to answer…We in the government believe that we will probably have to be mindful of corona for quite a long time. And the rules that we’ve decided upon together, about how important it is to wash your hands and keep your distance from other people and not visit your grandparents in person…we believe that we will have to follow these rules for quite a long time in Finland, even in the autumn.”

Reaching out to each other 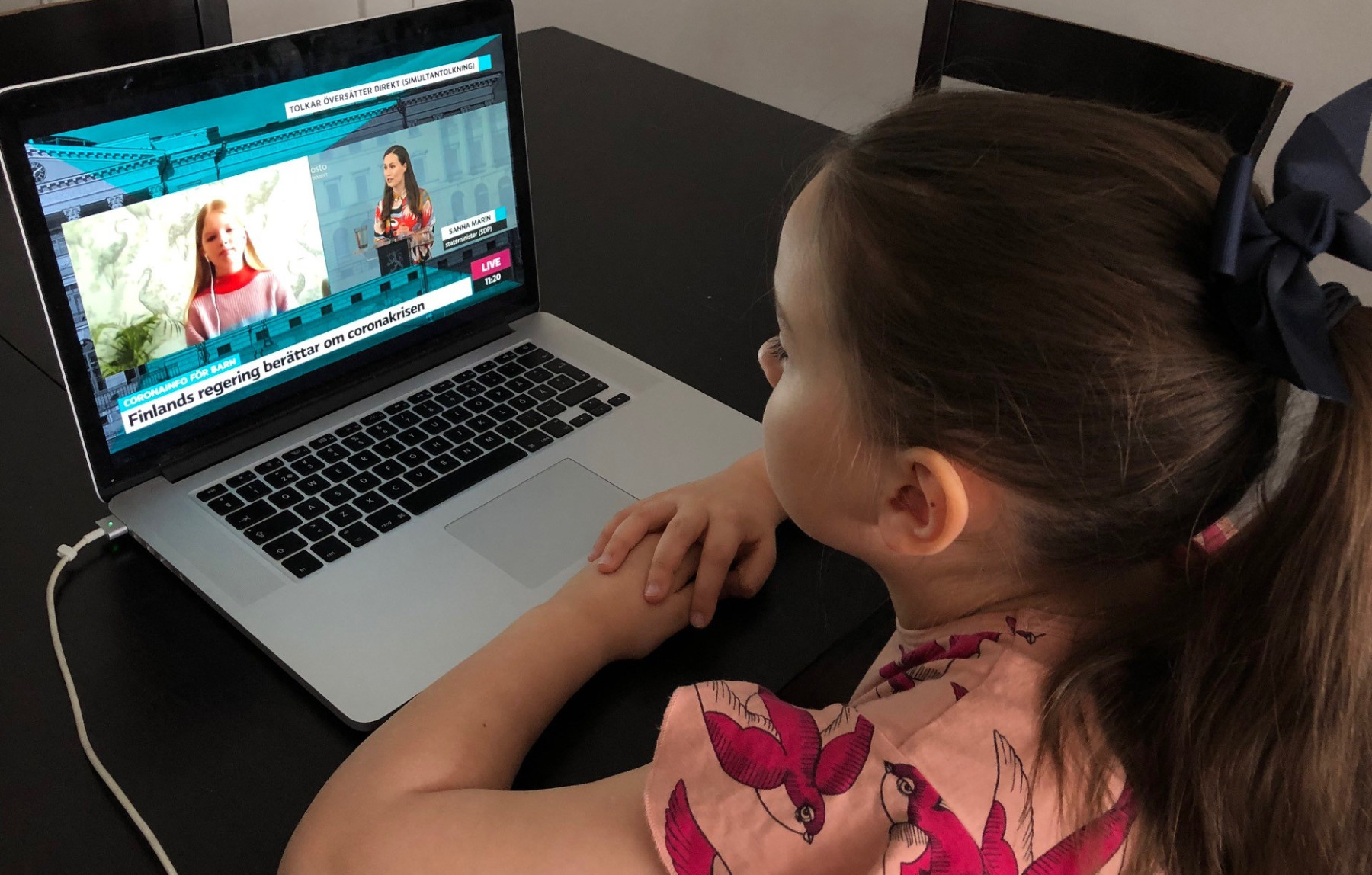 During a live broadcast, Finnish Prime Minister Sanna Marin answers the questions of a girl named Iiris as another schoolchild watches at home. The onscreen headline says, “The Finnish government speaks about the corona crisis.” Photo: ThisisFINLAND.fi

The last question came from Aaron at Yle: “What can I do for Finland?”

Prime Minister Marin answered, “Of course, children’s most important job right now is to keep up with their distance learning, to make sure they keep learning even though this school isn’t like what we’re used to. And of course it’s very important to stay in touch with relatives and friends and other people. I think that many grandparents are very happy when somebody calls up and asks how it’s going and tells them what’s been going on.”

Andersson said, “You’re doing a great deal already. We know that distance learning isn’t the easiest thing in the world…Another thing that you can do, and that I think is very important, is that you take care of not only your grandparents, but also your friends. If you notice that you haven’t spoken with one of your classmates for a long time, or if someone seems a bit down, or hasn’t been participating in distance learning like usual, then it’s absolutely a good idea to reach out and ask if everything is OK and if you can help.”

“We can cheer each other up,” Kosonen added. “That’s quite important, just like Sanna and Li said. A little message or call to a friend or grandparent…That was a great question.”

Back in Yle’s studio after the press conference, Emma and Aaron discussed how it had gone. “What did you think of the ministers’ answers?” asked Galaxi reporter Jasmin Beloued.

“I understood things pretty well,” said Emma. “They were very direct about how things are, and what you are allowed to do, and what you’re not allowed to do…I was disappointed that we won’t be able to visit our grandparents for a while.”

Less than a month after her 34th birthday, Sanna Marin was chosen by her party, the Social Democrats, to replace Antti Rinne as prime minister.