Photo show: Finland’s market halls form temples for local food and products. We capture their colour across the country.

Sampo, who sells fish at Helsinki’s Hakaniemi Market Hall, says that this salmon was still swimming around in the archipelago at 4 am the same morning.

With goods that are made in Finland, market halls attract foreign visitors curious about Finnish specialities and draw local residents looking for quality. The buildings themselves were constructed in the late 1800s and early 1900s.

In summer 2014, Hakaniemi Market Hall in Helsinki celebrated its 100th anniversary by offering customers coffee and cake. The two floors of the impressive, red brick building are home to nearly 70 shops, from fishmongers to bakeries, from organic vegetables to handmade gifts. Before becoming a market hall, the building, built in 1903, functioned as a horse stable when Finland was a grand duchy under the Russian tsar.

The Finnish capital boasts two other market halls: Hietalahti Market Hall at the west end of the Boulevard and Old Market Hall beside South Harbour. The latter reopened in summer 2014 after undergoing a year of renovation. Built in 1889, it is the oldest in Finland and is popular among tourists and locals alike, with a large variety of products and a charming atmosphere. 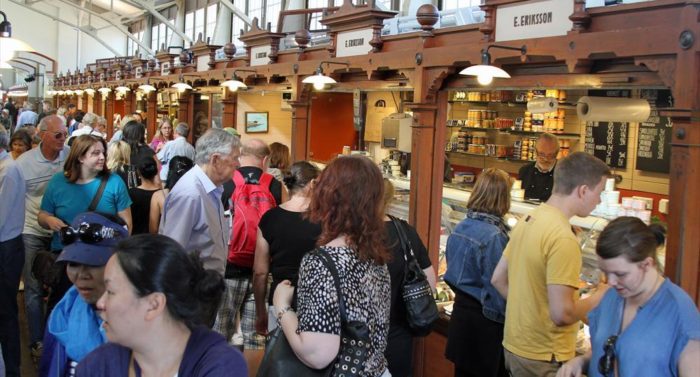 Helsinki’s Old Market Hall, recently reopened after a year of renovation, attracts crowds of tourists and locals in search of Finnish food and goods.Photo: Sabrina Salzano

“Most people want Finnish products,” says Elina, who works at the farm stand Sorri in the market hall in the southwestern city of Turku. “That’s why they come to the market hall.” After the long winter, locally grown vegetables replace the imports. Fresh lettuce, cucumbers, tomatoes and carrots travel only eight kilometres.

The market hall’s branch of the state-run liquor store Alko sells an organic beer made just 50 kilometres north of town. “We get a lot of demand for organic and regional products,” says Alko salesperson Tinja.

Market halls also contain restaurants and cafés. Another woman named Elina is sitting in the Sininen Juna (Blue Train) café, part of the Turku-based chain Aschan. She used to live in Saint Petersburg, and says that moving to Turku for her studies was an obvious choice: “The cultural life and the history are the main factors.” The same reasons contributed to her decision to have coffee and chocolate cake in a café that shows off vintage décor from a 1950 railway carriage: “This place is definitely special. Drinking coffee in a train inside a market hall is very nice.” 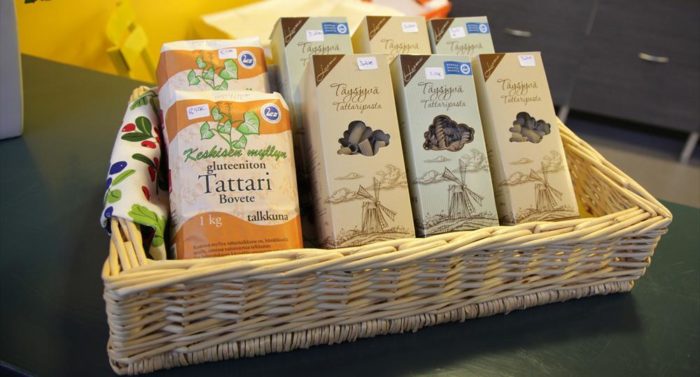 This locally made pasta in Tampere Market Hall caters to those who crave gluten-free cuisine.Photo: Sabrina Salzano

In 2012, 10 percent of the meat and dairy products sold in Finland were organic, and the trend is growing steadily. Tampere Market Hall’s organic restaurant Leo was launched in December 2013. A few stalls away, a bakery sells gluten-free products every Tuesday. Gluten intolerance has doubled in Finland during the past 20 years, so demand is rising.

Are there still shoes made in Finland? What comes to mind first is to check if the Nokian-brand rubber boots are still manufactured in the little town of Nokia just outside Tampere. “Unfortunately, only the sole is still made in Finland,” says Minna, who works in Kenkä Mikko, the market hall’s shoe shop.

“But we have other, smaller brands that still make their shoes entirely in Finland.” She holds up footwear made by Sievi (manufactured in the town of the same name, farther north) and Walker’s Friend (made in Vataja, about 100 kilometres west of Tampere). 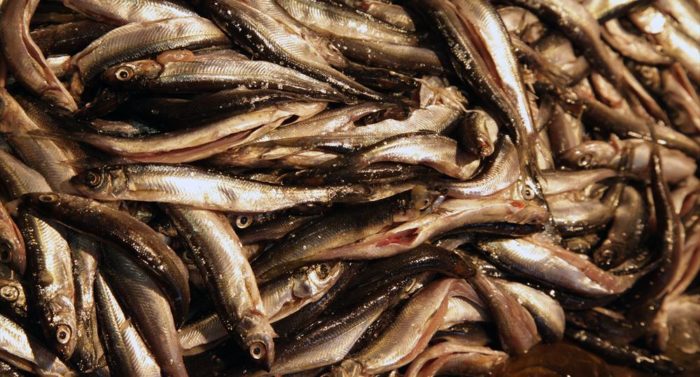 The tiny “muikku,” known as vendace in English, can be fried to form a snack or a meal.Photo: Sabrina Salzano

Finns love fish. Given their annual consumption of 35 kilogrammes per capita, it is no surprise that the market halls include fish stalls. Perch, salmon, pike, whitefish and trout form a few of the species that stare at visitors from trays of ice. “When buying a fish, always check the eyes,” advises Teresa, owner of Kala Patagónico in Hakaniemi Market Hall. “The pupil must be dark and the eye must be clear and shiny.” At the market, fish are always fresh.

Another Hakaniemi fish seller, Sampo, says that the wild salmon he is holding was still swimming in the archipelago off of Porvoo at 4 am that morning. The eastern Finnish city of Kuopio is known as the capital of the kalakukko, a rye bread filled with fresh vendace, a kind of whitefish. This tasty traditional treat is of course readily available in Kuopio Market Hall.

The range of shops housed in market halls is not limited to food and clothing. The Kuopio region includes thousands of summer cottages, each with a sauna. Naturally Kuopio Market Hall features a shop dedicated to that favourite Finnish activity. And Tampere’s vendors don’t forget their customers’ dogs: smoked reindeer, pig and cow ears form local delicacies for humankind’s best friend. 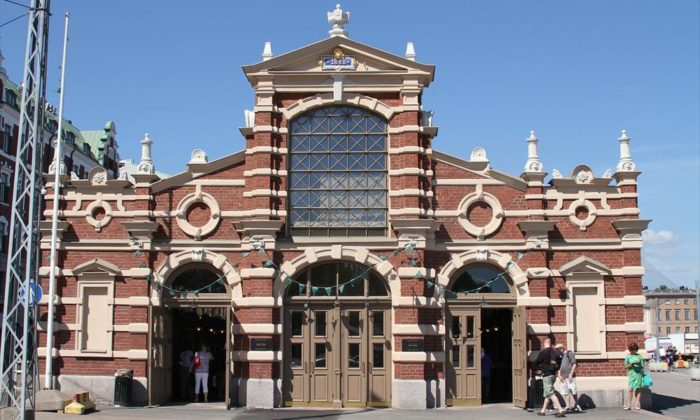 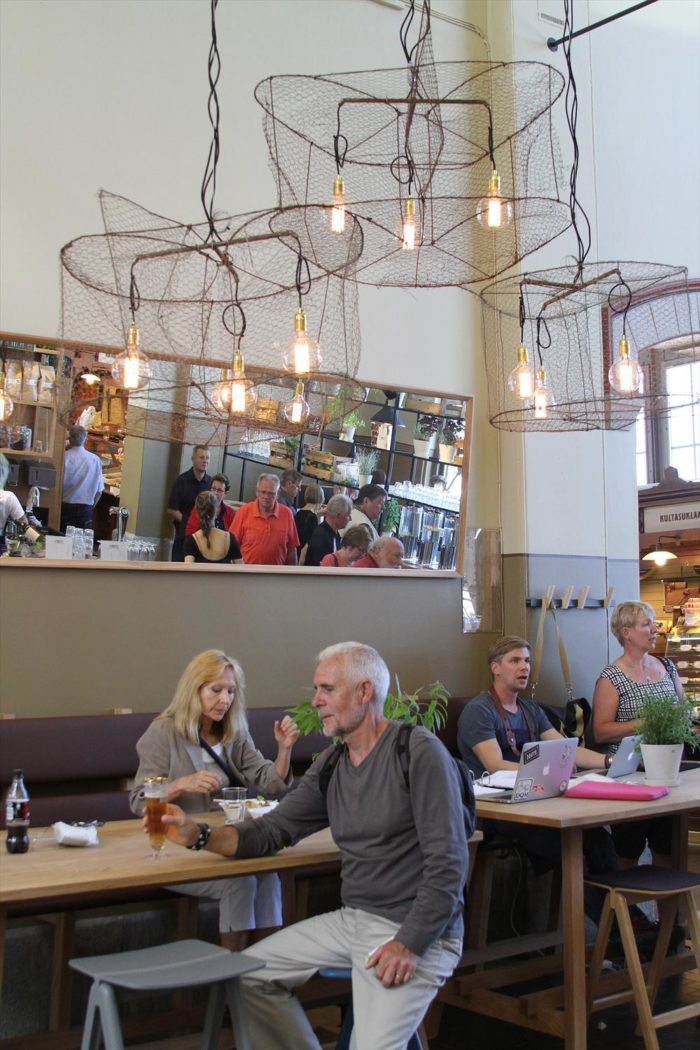 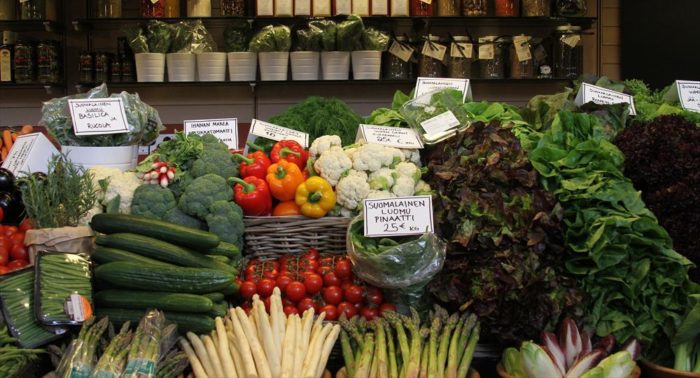 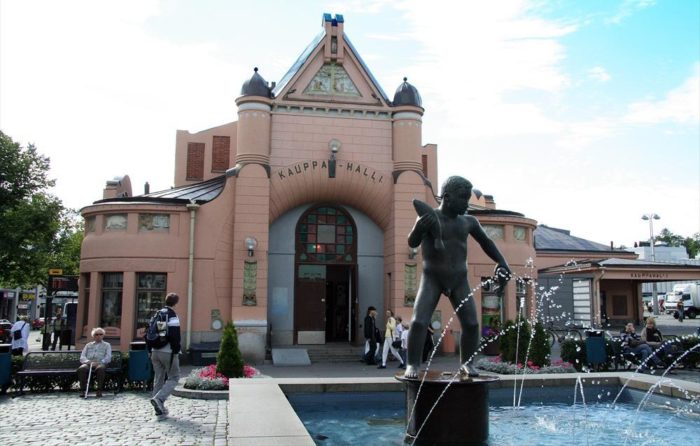 Kuopio Market Hall has something to offer anyone interested in shopping – or architecture. Photo: Sabrina Salzano 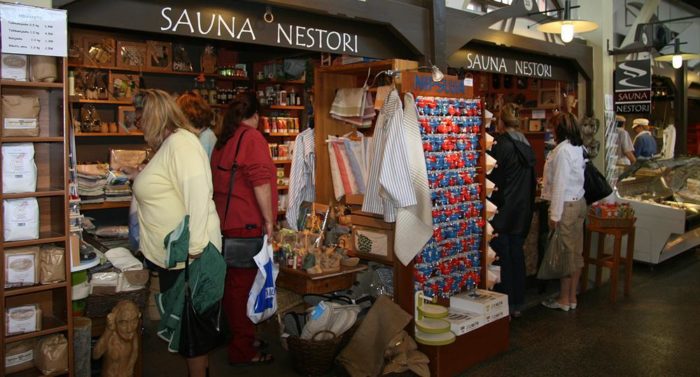 With so many summer homes – and their saunas – in the Kuopio region, it’s natural that the market hall contains a shop specialised in sauna supplies. Photo: Sabrina Salzano 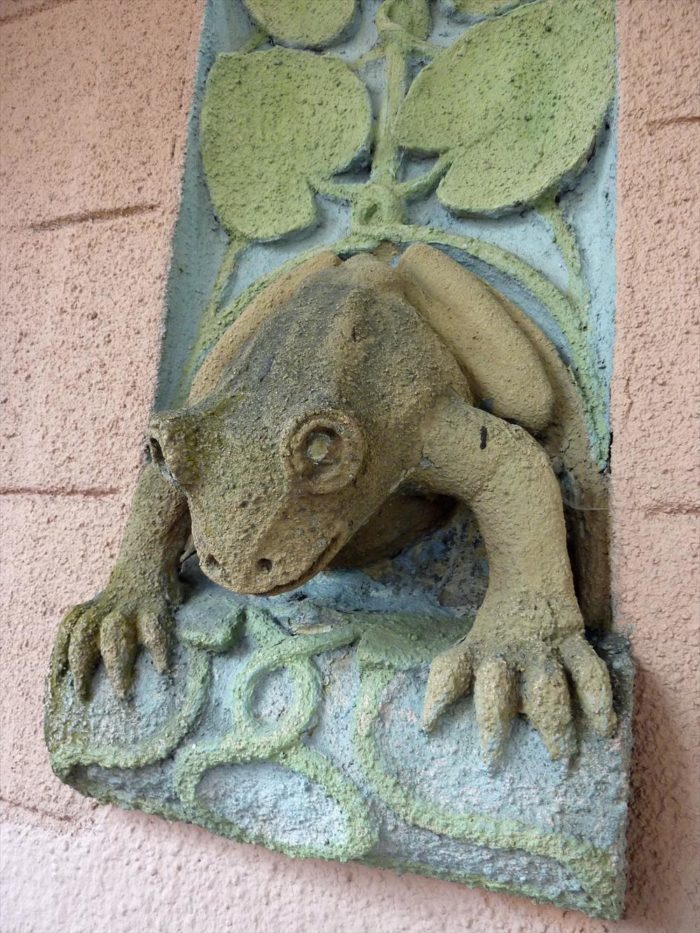 An architectural detail on the side of Kuopio Market Hall looks like it’s trying to escape. Photo: Sabrina Salzano 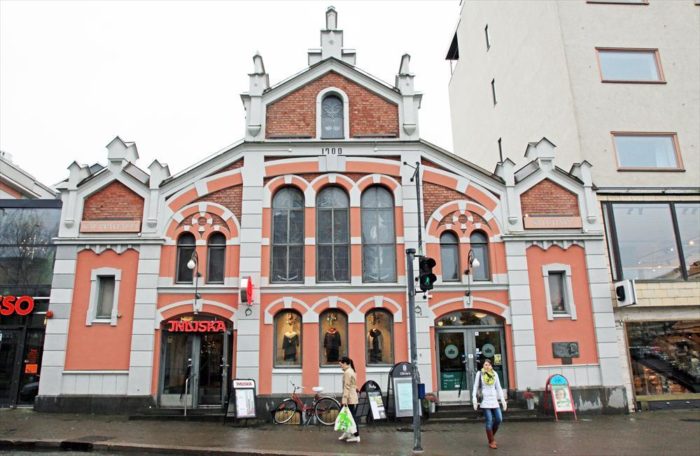 On a rainy day in Vaasa, it’s easy to see the benefits of an indoor market. Photo: Sabrina Salzano 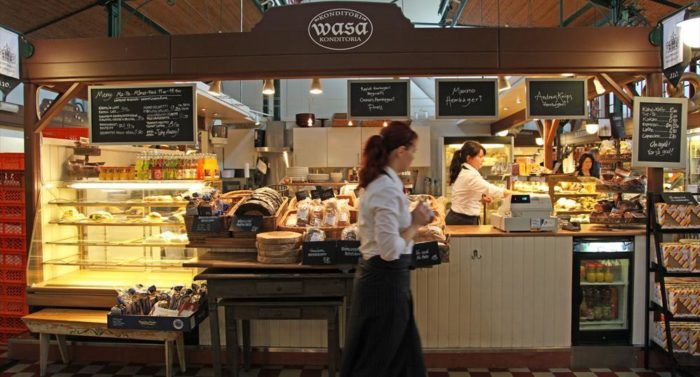 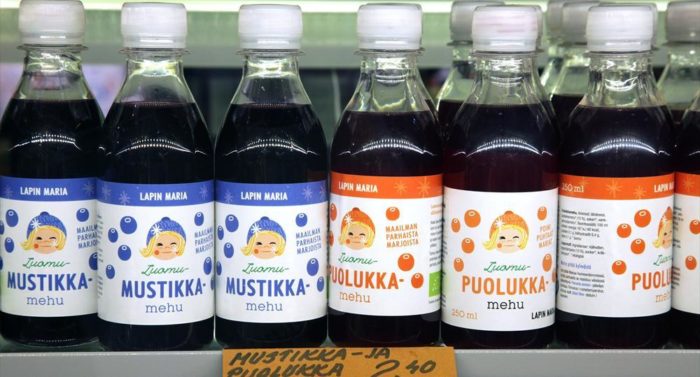 Finnish blueberries and lingonberries are the best in the world, according to the label on these juice bottles. Photo: Sabrina Salzano 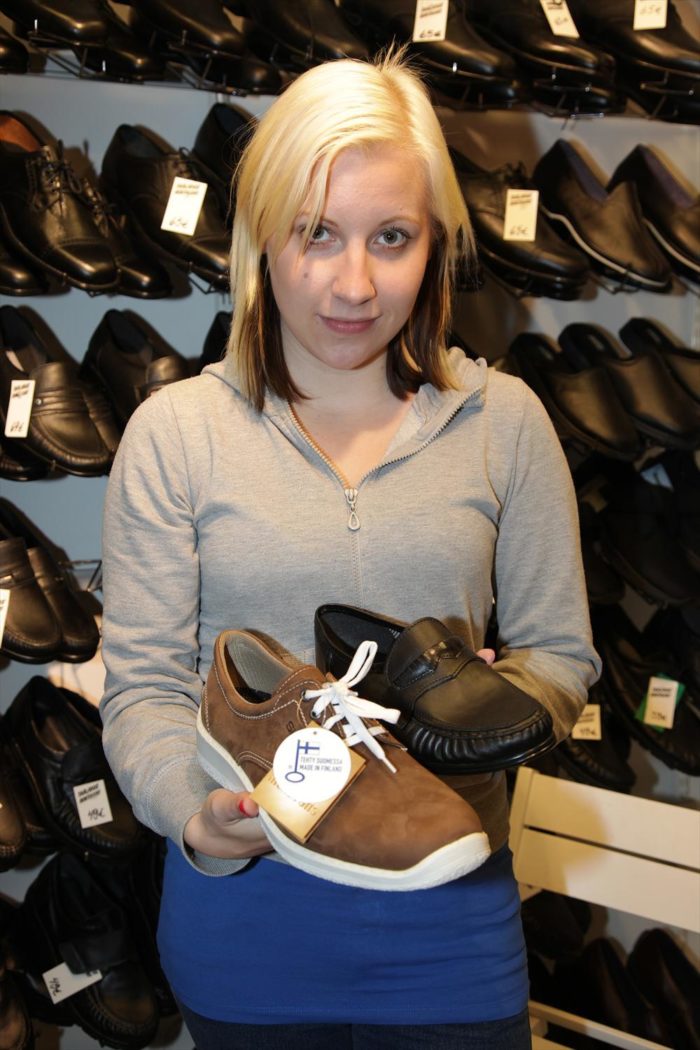 In Tampere Market Hall, Minna shows off two shoe brands that are 100 percent made in Finland: Sievi and Walker’s Friend. Photo: Sabrina Salzano 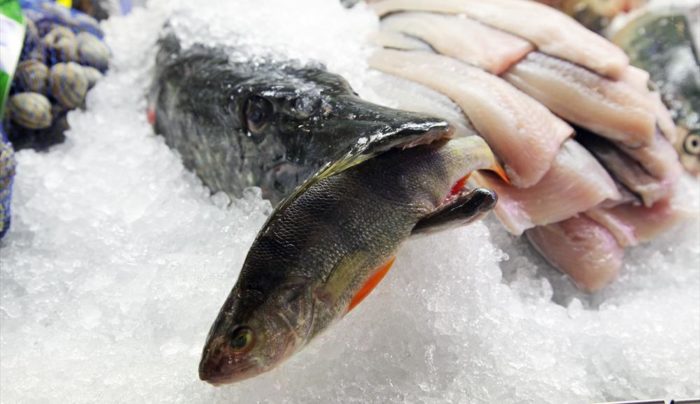 A Turku fishmonger showed creativity when trying to get customers’ attention – by having one fish catch another. Photo: Sabrina Salzano 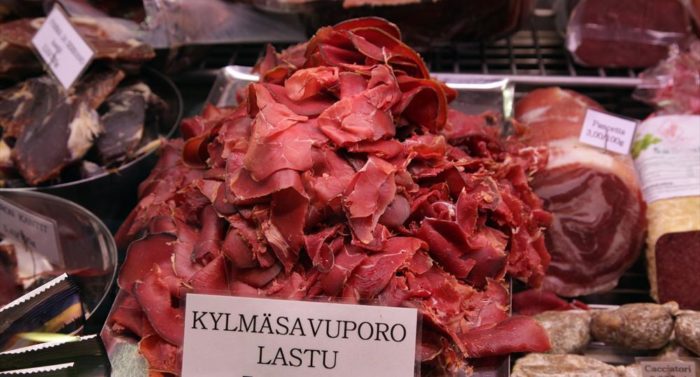 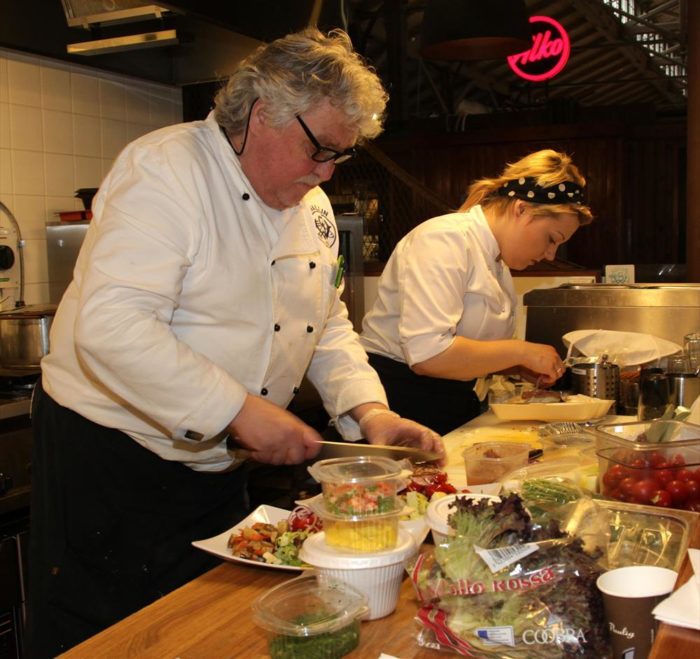 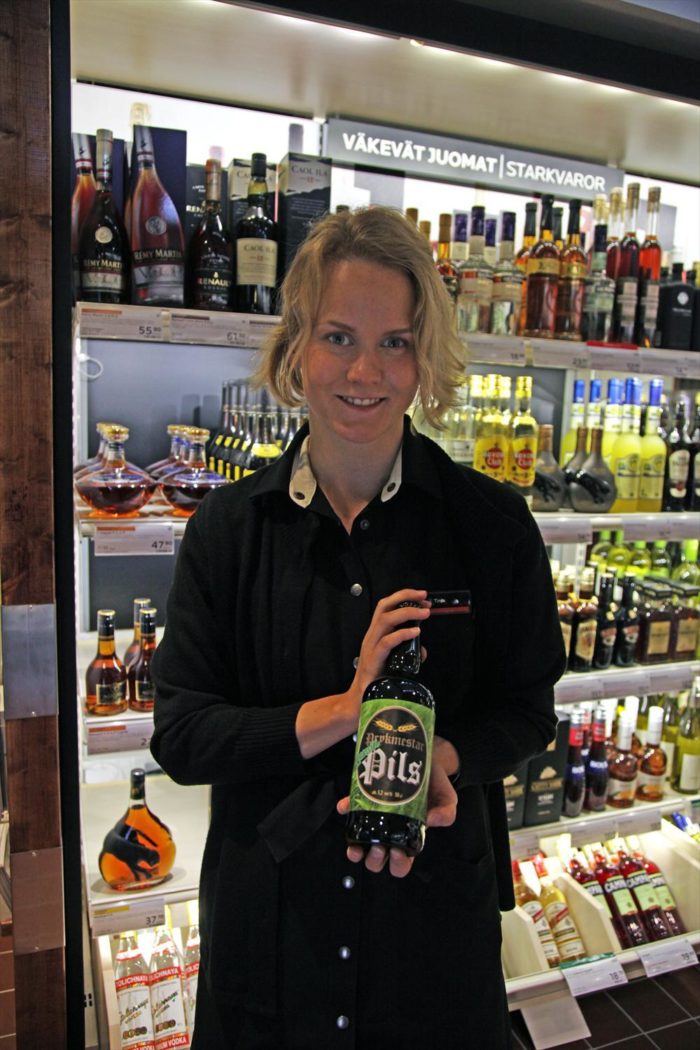 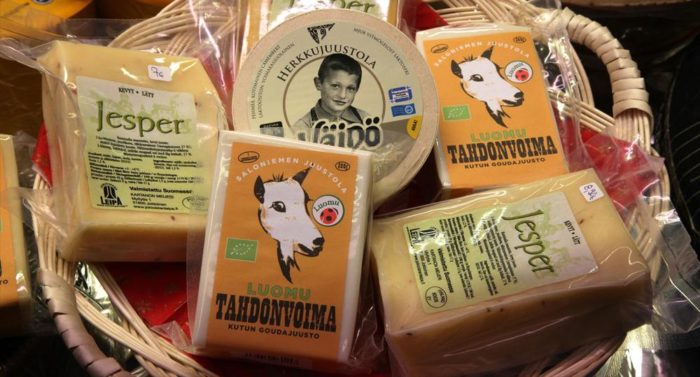 The market hall is the place to go for delicious locally made and organic cheeses. Photo: Sabrina Salzano 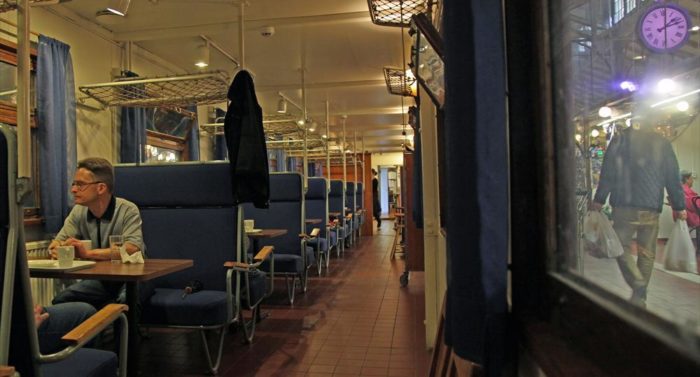 A café inside a train inside a market hall: This café in Turku Market Hall took its nostalgic décor from a vintage 1950s train. Photo: Sabrina Salzano 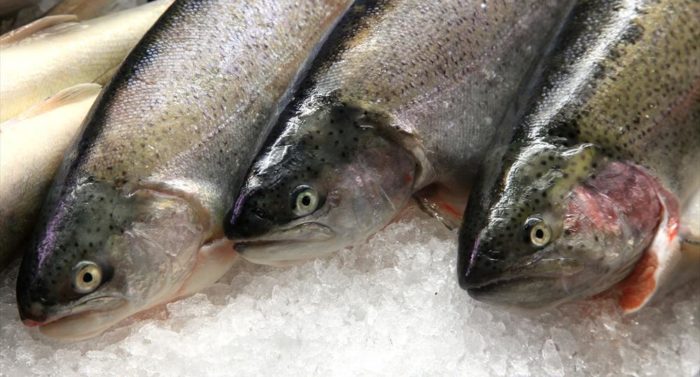 It’s not polite to stare, you know. Photo: Sabrina Salzano 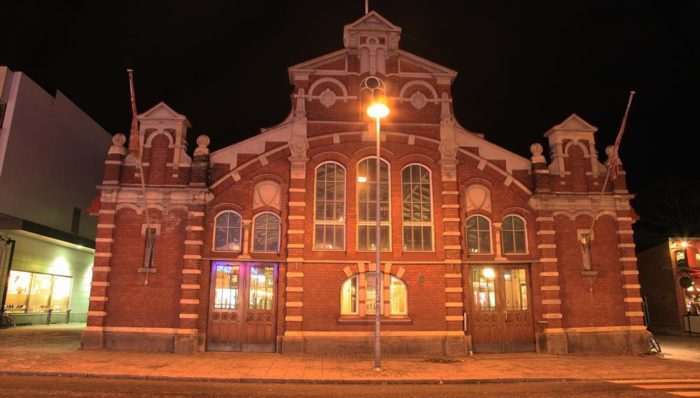 Text and photos by Sabrina Salzano