The Finnish school system helps foreign and mixed-nationality families to bring their kids up to be truly multilingual.

Demi and Gabi Berman speak English with their dad and Finnish with their mum. Extra English lessons at school have helped them become fully literate in their second home language.

Finnish schools provide welcome support to parents who wish to bring up their kids speaking other languages in addition to Finnish or Swedish.

Richard Berman from England and his Finnish wife Heidi have brought up their children Demi, 11, and Gabi, 9, to speak both English and Finnish at home. The girls switch fluently between the two languages, depending on which parent they are talking to.

Demi and Gabi attend the local school a stone’s throw from their home in Helsinki. Classes are taught in Finnish, and the girls initially learnt to read and write in Finnish. But the Bermans have taken advantage of a free scheme set up within the Finnish school system to give children of immigrant or mixed linguistic background extra lessons in any other languages they may speak at home.

To boost their daughters’ bilingualism they send them to extra classes in a nearby school – with help from Granny as a chauffeur. “Our class of about 15 kids meets for 90 minutes every Thursday afternoon after my normal lessons,” says Gabi. “We do reading, writing, some grammar exercises and games like word searches, and we get a bit of homework too.”

“I haven’t minded going on to extra English classes as they’ve been fun and I’ve made good friends there – though it’s best when the group is small and the teacher can help more,” says Demi. “We also talk about things like seasonal festivals, and the teacher recommends good books.” 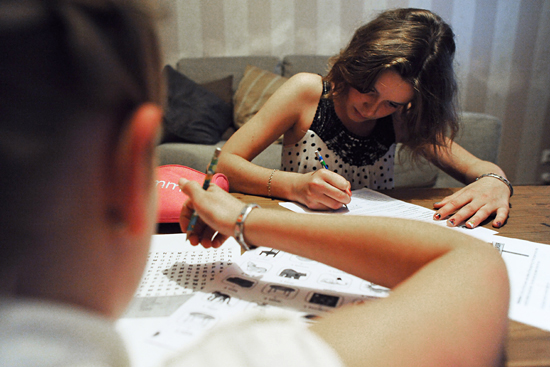 The girls don’t mind the extra English homework they get, as their teacher finds enjoyable and motivating exercises. Photo: Emilia Kangasluoma

Finnish has very straightforward pronunciation and spelling rules, so learning to read, write and spell in another language such as English is a new challenge. “It was a good time for the girls to start on these extra lessons just when they were learning to read and write,” says Richard.

“The lessons really helped them – in fact Demi’s spelling is possibly better than her father’s now!” agrees Heidi.

Leena Nissilä, an expert in multilingual education from the Finnish National Board of Education, explains that the nationwide scheme provides funding enabling local education authorities to set up free classes in any language wherever they can connect suitably skilled teachers with at least four school-age children who speak the target language at home. Some groups also include Finnish children who have learnt a language while their family was living abroad.

Aside from acquiring a job here in their chosen profession, students at Työväenopisto have different motives for learning the language.

“Of course two hours a week isn’t enough to build up language skills to native standard, and families must still help their children, especially by reading with them and providing books,” says Nissilä. “The main goal is to give children tools to develop their own interactive language skills, but lessons also cover the literature, food and traditions of the culture behind the language.”

Polyglots an asset for Finnish society 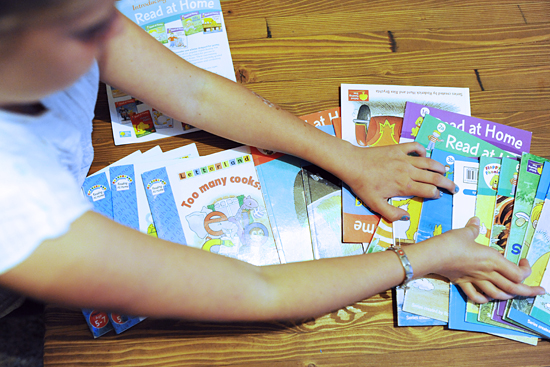 Parents are encouraged to make sure their kids have plenty of fun books to read in both of their home languages. Photo: Emilia Kangasluoma

The Finnish authorities recognise the value of children learning other languages than Finnish or Swedish to native-speaker standard. “In future Finnish society will certainly need skills in different languages, including smaller minority languages,” says Nissilä.

More than 50 languages are taught through the scheme. In autumn 2012 about 14,000 pupils attended such classes around the country. Russian, Arabic, English, Estonian, Chinese and Spanish are widely taught, as well as languages of significant immigrant communities including Somali, Kurdish, Albanian and Vietnamese.

“When it comes to immigrant families, the thinking in Finland is not to ‘assimilate’ them into Finnish society, but to ‘integrate’ them effectively. Countries whose systems don’t value the linguistic and cultural backgrounds of immigrant communities tend to have more problems with integration,” says Nissilä. 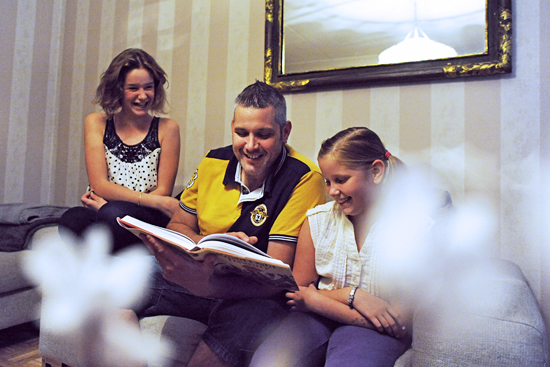 Richard Berman feels that reading English children’s books with his daughters over the years has been a great way to help them become truly bilingual.Photo: Emilia Kangasluoma

Given Finland’s long experiences of bilingualism involving Finnish and the country’s other official language, Swedish, the Finnish educational authorities are convinced of the benefits of bilingualism.

“Scheduling the lessons can be tricky, and we’re pleased that so many municipalities understand the importance of this issue and provide lessons,” says Nissilä. “We’re also happy that so many families take advantage of this opportunity, which doesn’t exist in most countries.”

The lessons are voluntary, so it’s important that both parents and teachers motivate the children and make learning enjoyable.

“We’re very glad these lessons have been offered, and it’s been worth the effort to get the girls to them,” says Richard Berman. Demi and Gabi are clearly proud to be bilingual. Demi has started Swedish at school and is doing well, and both girls are often asked by their friends and even their teachers to act as translators and interpreters.

Learning Finnish in the community

Työväenopisto offers students a range of skills at a low cost, with Finnish-language courses a major drawcard.

Foreign students at Finnish universities highly recommend the experience of studying in Finland.