Kilometre-high skyscrapers or wooden buildings: Finnish companies are at the forefront of new construction technology.

Wood City will be the largest wooden quarter of its type in Finland, throbbing with residential, working and hotel life around its courtyard. Building begins in 2014.

When it comes to kilometre-high skyscrapers or inventive wooden buildings, Finnish companies are at the forefront of new construction technology.

By 2004 the Finnish company KONE had identified a problem. They had just supplied elevators to Taipei 101, then the tallest building in the world, and knew elevator technology was not keeping pace with other advances in architecture.

“While elevators have enabled the rise of city skylines, the technology had reached its height limit,” explains Giuseppe Bilardello, senior vice president of technology and research at KONE. “Elevator travel distances of more than 500 metres are not feasible as the weight of the ropes becomes so great that more ropes are needed to carry the ropes themselves.” 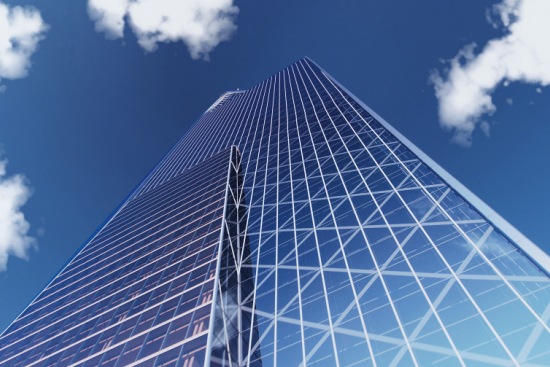 In the little town of Hyvinkää north of the capital Helsinki KONE researchers got to work. They tinkered and studied and argued over prototypes. Finally, in the summer of 2013, the company announced they had cracked the problem.

KONE ditched the old steel cables and instead created one consisting of a carbon fibre core covered with a unique high-friction coating. They call it UltraRope and say with this technology future elevator travel could reach heights of one kilometre, twice the current limit.

“Carbon fibre has excellent strength properties and the coating is highly resistant to wear and abrasion,” Bilardello continues. “The new ultralight rope technology eliminates the disadvantages of existing steel ropes: high energy consumption, rope stretch, large moving masses and downtime caused by building sway. The lifetime of UltraRope is twice as long as that of steel rope.” 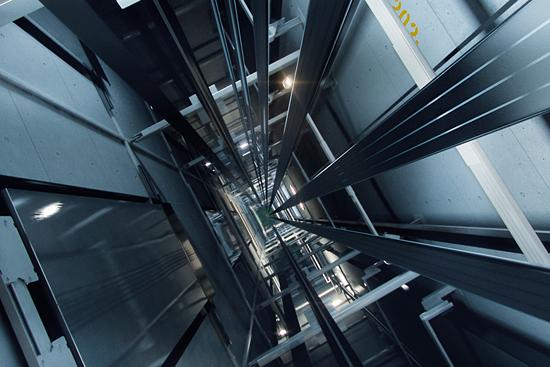 KONE created a cable consisting of a carbon fibre core covered with a unique high-friction coating. They call it UltraRope. Photo: © KONE Corporation

UltraRope has not yet been deployed in a skyscraper, but other construction technology is already gracing the inside of Finnish elevator shafts. Stora Enso produces cross-laminated timber (CLT), which was used to build a wooden lift shaft in the Finnish Nature Centre Haltia outside Helsinki. CLT is strong enough to be used in place of concrete in load-bearing structures.

Haltia was created to not only be a showcase for Finland’s natural treasures, but also to demonstrate ecological wooden construction techniques. Taking a step forward in this concept is Wood City, which will be an eight-storey block in Helsinki.

“Wood City will be the largest wooden quarter of its type in Finland, throbbing with residential, working and hotel life around its courtyard,” says Matti Mikkola of Stora Enso. “Upon completion, Wood City will be a masterpiece of the latest wooden construction that will raise expertise in this field.” 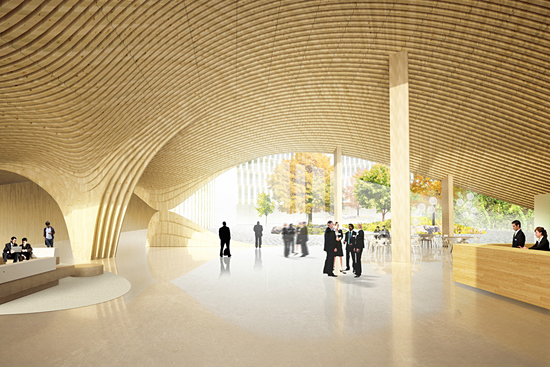 Building begins in 2014, and will be overseen by the Finnish construction and project development company SRV. Tuomas Rantsi of SRV says CLT has advanced to the state where it is cost-competitive and a fast solution for urban construction. Yet there are even more benefits to wood.

“Wood City is an ecological choice for its users and wood helps create pleasant spaces for the mind and body,” he explains. “A company located in wooden city quarters gains brand value and is regarded as a trailblazer.”

While interest has already been high because of the renewable wooden construction material, the design is just as striking.

“The design language of the ground floor draws parallels from Finnish nature and aims for a timeless, personal and striking atmosphere,” explains Vesa Oiva of Anttinen Oiva Architects.