Saunalahti School, located just west of Helsinki, shows how architecture mixes with education and a sense of community.

Award-winning Helsinki firm Verstas Architects recently built Saunalahti School, which opened its doors in autumn 2012 to 750 students, from preschool to teenagers. The 10,000-square-metre building elicited an unlikely response: It has become the living room of the whole neighbourhood. 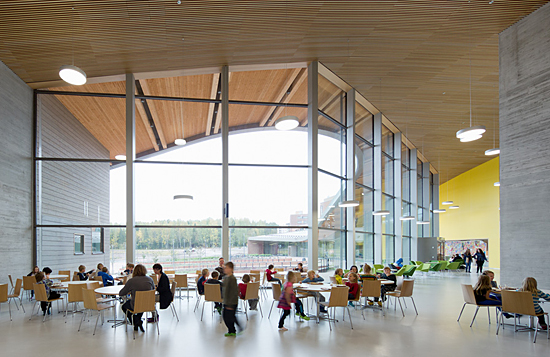 More than just a place to study art, math and literature: Saunalahti School is designed to serve schoolchildren and the surrounding community. Photo: Andreas Meichsner/Verstas

“The building is in maximum use almost around the clock,” says school principal Hanna Sarakorpi. “There is a lot of synergy all of us can benefit from.”

The school was built as more than just a place to study art, math and literature. It was meant to become a focal point for its corner of Espoo, according to Ilkka Salminen, who co-created the building with his partners at Verstas, Väinö Nikkilä, Jussi Palva and Riina Palva.

The school’s library is open to the public in the evening, while cooperation between the school, the daycare and the youth centre is constantly growing.

Deciphering the secret of success 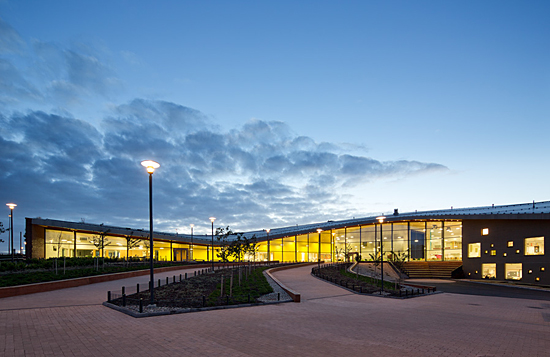 Parts of the school, such as Saunalahti Library, stay open to serve the public during the evening. Photo: Andreas Meichsner/Verstas

Consistently ranked as a top education leader by the Programme for International Student Assessment (PISA), the Finnish school system offers more than just academic support: health, dental and counselling services are available through the schools and help ensure students’ wellbeing.

An OECD report notes that, since the first PISA in 2000, “Finnish schools have become a kind of tourist destination,” where educators and policymakers from around the world try to decipher “the secret of success.”

In the 2000, 2003 and 2006 PISA surveys, Finland took top honours in literacy, mathematics and science, and it remained in the top 10 in 2009 despite moving to sixth in mathematics, second in sciences and third in reading. (At the time of writing, the 2012 results have not yet been released – the release date is December 3, 2013.)

Qualifying as a teacher in Finland – even a primary school teacher – requires a university degree. Education degree programmes at Finnish universities enjoy a great deal of popularity, and admission is notoriously competitive. 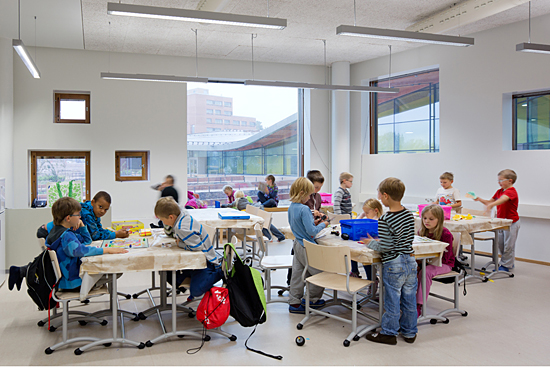 Saunalahti School was designed to integrate a nontraditional classroom into the education experience for new ways of learning – with an emphasis on collaboration. For example, glass walls between classrooms allow students to work in groups and “were built primarily to support the pedagogical idea of the school,” says Salminen.

There’s room to get away, as well. Sarakorpi notes that the children love to explore the sprawling schoolyard or just sit and read on the windowsills.

“Some students don’t feel comfortable in a [traditional] classroom,” says Salminen. “Every interior and exterior space is a potential place for learning.”

The workshop-friendly classrooms have glass doors which open to neighbouring student groups, while there is enough open spaces in the broad hallways to sit, work and study. In other words, the design supports learning outside of the classrooms. 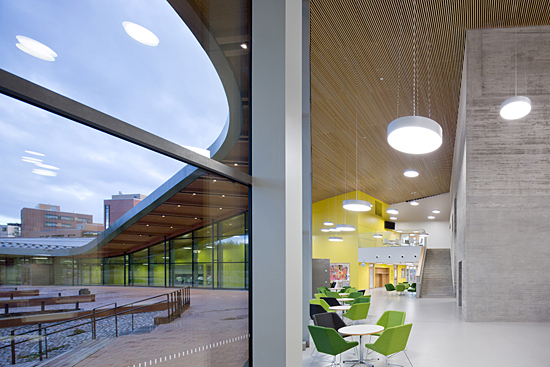 It began in 2008, when 13 architects at Verstas started designing the school. Construction commenced in 2010 and was completed in 2012. Since then, the building has made an impact at the educational and community levels.

One side of the three-floor building incorporates a swooping glass wall with a curved wooden roof that looks a bit like a ski slope. The architects had to be careful that the building would not cast a shadow onto the schoolyard. The curvaceous glass structure contains a daycare, preschool, public library and youth club. Square windows of various sizes are scattered over one wavy wall, looking out onto the open school yard.

For the school, the biggest challenge was staying within the budget and the physical parameters, says Sarakorpi. As for the architects, they wanted to allow as much light as possible into the school so children could maximise their daylight hours during the dark Finnish winters, when the short days amount to the exact opposite of the Nordic summer’s white nights.

Apparently, it’s the inner light that matters. The central fireplace in the foyer acts as the heart of the school.

“We think that inspiring architecture may give a child a positive drive for growing up and learning things,” says Salminen, “and turn the learning moments into thrilling experiences.”

A Finnish twist on IB schooling