A Finnish company is helping people engage with 3D printing. You can even use a 3D printer for free at Aalto University.

A Finnish company has developed an innovative way to engage people with three-dimensional printing. If a Finn doesn’t have a 3D printer, he or she can use one for free at Aalto University.

Kari Voutila thinks that we are in the midst of the next industrial revolution. If he has his way, his company will be at the centre of it.

“I believe 3D printing is the next step in digitalisation,” says Voutila, CEO of the Kuopio-based 3D Online Factory. “What has happened in the music industry with Spotify, and in television with YouTube and Netflix, is also going to happen with physical things.”

He says that industry will change from mass production to local, personalised fabrication. Consumers will manufacture their own products with their own 3D printing devices or at printing hubs. People have been predicting this for some time, but 3D Online Factory already has a plan in place. The beginning of their idea is called Launzer.

“The basic idea is engagement,” continues Voutila. “We see 3D printing as a tool, not a reason to exist. What we offer when we talk about ‘social media of things’ is a platform for interaction between companies and consumers, brands and fans.” 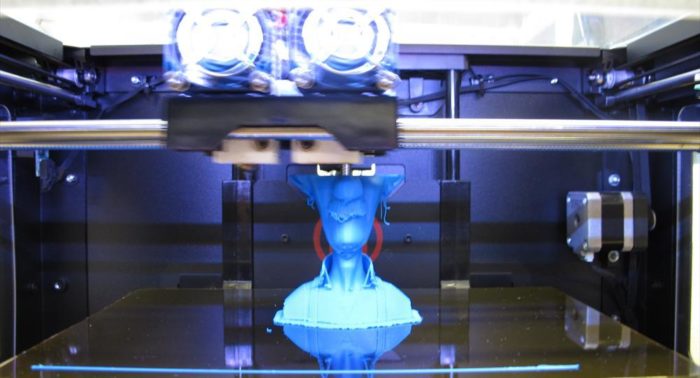 Building a bust: A statuesque form takes shape in a 3D printer at FabLab.Photo: flickr/AaltoFabLab cc by 2.0

Building a bust: A statuesque form takes shape in a 3D printer at FabLab.Launzer will be a 3D printable marketplace where consumers interact with each other as well as the brands. A person could print out characters from their favourite games, for instance. Early participants include the gaming company Legendary Games and the entertainment business Eyeworks.

“For fans, the innovative part will be the social media elements,” Voutila explains. “Fans can share all that they have printed out, follow other users and be part of the design and marketing of their favourite brands. It’s easy and fun. It is a new platform for brands in entertainment, gaming, media and design to do merchandising in a totally different way.”

For people who would like the idea of 3D printing but don’t know where to start, Aalto University’s Fabrication Laboratory is there to help. Inside FabLab, people can find the equipment, materials and expertise for their own projects.

“I first came here just as a member of the public,” says Charlie Banthorpe. “I designed my own coffee table and came to have the top fabricated. Now I work here.”

Banthorpe, who has the vague but intriguing job description “helping you make stuff out of things,” shows off Aalto’s FabLab along with his fellow studio master Ali Neissi.

Paying it back with impressive output 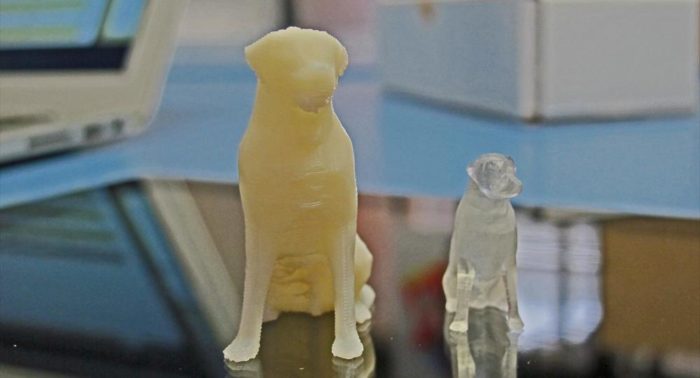 Banthorpe and Neissi show off elaborate bracelets and sculptures as the 3D printers slowly print out two miniature Labrador dogs. The quality of FabLab’s output is impressive: an observer would probably never know that the signage and much of the furniture was designed and created in-house.

“The oldest person we’ve had was a 75-year-old who made a bridge prototype,” says Neissi, who specialises in electronics. “The youngest was a baby who came in with his parents. We get entrepreneurs building prototypes; hobbyists; artists; and all sorts of people. Many people don’t want some mass-manufactured item. Instead they want something personalised.”

Although the equipment is normally reserved for students, anyone can wander into FabLab during its weekly open days. A person can use the machines and get help or advice for free. The only fees are for the materials, and even those costs are minimal.

FabLab has scanners, cutters, milling machines and a variety of 3D printers. Some of the printers are commercial models, but others are open source machines built by the community. The idea of open source – universal access and open collaboration – is at the heart of the project.

“This is the philosophy of FabLab,” Banthorpe explains. “It is paying it back and building on what others have done. You share your knowledge and you share your experiences.”

The Finnish startup ecosystem draws the brightest minds and most innovative companies in the world to Slush Helsinki.