Our reporter sends an update from among the throngs of entrepreneurs and investors at the wildly popular Slush Helsinki, one of Europe’s premier annual events for startups (this article describes the atmosphere at Slush 2013).

Peter Vesterbacka of Rovio, the company that created Angry Birds, was disappointed. Several years ago he asked a group of 600 students how many were interested in entrepreneurship. Only three hands went up.

“We had to do something,” Vesterbacka says.

Judging from the 6,000 people crammed into Cable Factory in western Helsinki, that “something” appears to be working. This is Slush Helsinki, the world’s largest community-organised event for startup companies. As part of the renowned Startup Sauna organisation, Slush has the goal of promoting entrepreneurship. 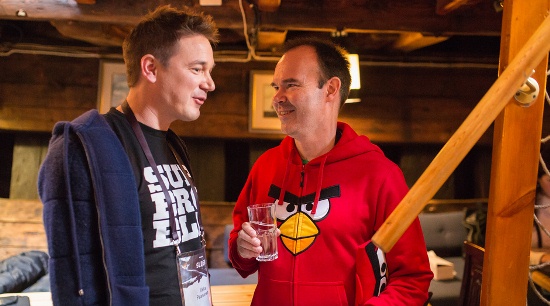 “As political decision-makers, this gives us hope,” Finnish Prime Minister Jyrki Katainen said during the opening ceremonies. “At Slush there is a spirit of changing the world.”

Giant multinationals such as Nokia and Amazon maintain a presence, but the majority of the companies are small, high-tech startups. Out of the 1,200 firms in attendance, the largest industry represented is healthcare and life sciences. Gaming is also popular, with dozens of enterprises hoping to follow in the magnificently successful footsteps of Finnish gaming giants Rovio and Supercell.

“It’s not all social networks and web services,” Vesterbacka says. “We have companies engaged in actual rocket science, and we even have 23 in nuclear or radiation technology.”

One of the big draws is robotics. In the yard outside Cable Factory, ZenRobotics has a giant robotic contraption whose arms, guided by artificial intelligence, sort through rubble for recycling. Hundreds of people gather to see it unveiled.

“The only thing we have to worry about is a robot uprising,” jokes ZenRobotics founder Jufo Peltomaa.

In search of hot young companies 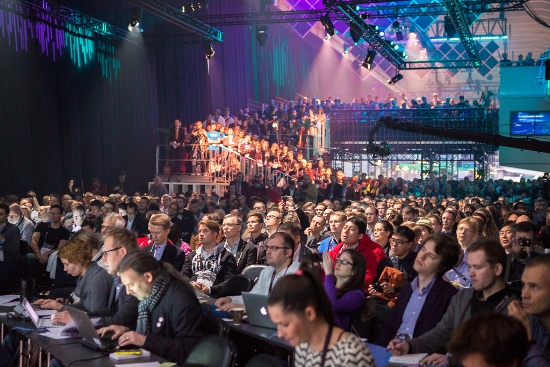 The proof that Helsinki has become one of the world’s premier ecosystems for nurturing creative young companies is evident from those in attendance. They have come from all over Northern Europe and Asia, but Russia is especially well represented, with about 400 people participating.

“Finland and Russia compete against each other in ice hockey, but we collaborate in innovation,” says Russian Deputy Prime Minister Arkady Dvorkovich with a smile.

Hundreds of international venture capitalists come to Finland in their search for a hot young company. Entrepreneurs take the stage to quickly pitch their companies to potential investors, explaining who they are and what they do.

Another firm present has a different way to match companies and investors. FundedByMe is the only international crowdfunding company that uses both equity and reward-based platforms.

“I’m so proud that we have something like Slush in Finland!” says FundedByMe’s Kristiina Pääkkönen. “It’s very inspiring.” 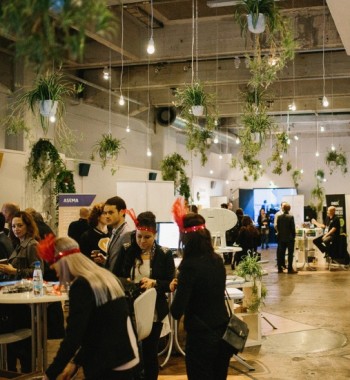 It’s a jungle out there: One of the spaces at Slush Helsinki is decked out with hanging plants. Photo: Jussi Hellsten/Slush Helsinki

Yet there is much more to Slush than finding funding, and not all startups are even interested in more capital.

Venuu finds venues – a person looking for a place to hold a birthday party or wedding, for example, can input what type of place they need and discover what is available and fits their criteria. It’s remarkable the company is already profitable, because it was only founded five months ago. But Virtanen is no stranger to entrepreneurship and is exactly the type of person Slush wants to encourage.

“I’m 27 years old and this is my fourth company,” Virtanen says.

Norbert Juhasz is one of those people Peter Vesterbacka would like to turn into a serial entrepreneur just like Virtanen. He is in his first year of a master’s programme at Aalto University in Helsinki.

“This is my first time at Slush,” says Juhasz. “They recommended I come to get information about startups. Maybe I will start my own company someday.”

Blueprint Genetics, a startup that attended Slush Helsinki in 2013, may revolutionise testing for inheritable diseases.