Aalto University’s spring fashion show, held every May in Helsinki, is on the agendas of international journalists, scouts, bloggers and anyone else who’s into apparel. What’s behind the most recent success of Finnish designers?

Models line up at Aalto University’s spring fashion show, ready to show off the work of the students (all photos from the 2018 edition of the event).

Young Finnish designers have been winning awards on a regular basis at prestigious events such as France’s Festival de Hyères. In addition to Marimekko, other Finnish brands that are familiar names in international fashion circles include Samu-Jussi Koski’s Samuji, now sold in 16 countries; Tuomas Merikoski’s Paris-based Aalto International; and Heikki Salonen’s Vyner Articles in London.

Tickets to Aalto University’s spring fashion show sell out in a flash. The audience is dotted with reporters from global fashion magazines and scouts for major fashion houses – and they are enthralled!

Martta Louekari is one of those responsible for this phenomenon. She was involved in creating Garden, a centre for Finnish fashion on the second floor of upscale Helsinki shopping centre Kämp Gallery. She has also had a hand in the development of the Fashion in Helsinki event (a week-long programme of screenings, presentations, exhibitions and discussions, including the Aalto University spring show) and several other projects that connect Finnish designers with international opportunities.

In Finland, design has always been democratic. Nearly every home seems to have Fiskars scissors, Iittala drinking glasses and Marimekko curtains. Maybe that’s why the country’s fashion sensibility embraces a wide array of people. Some Finnish brands build their entire identity around equality and egalitarianism – and many conscientious young Finnish consumers favour domestic products, as long as they’re high-quality. 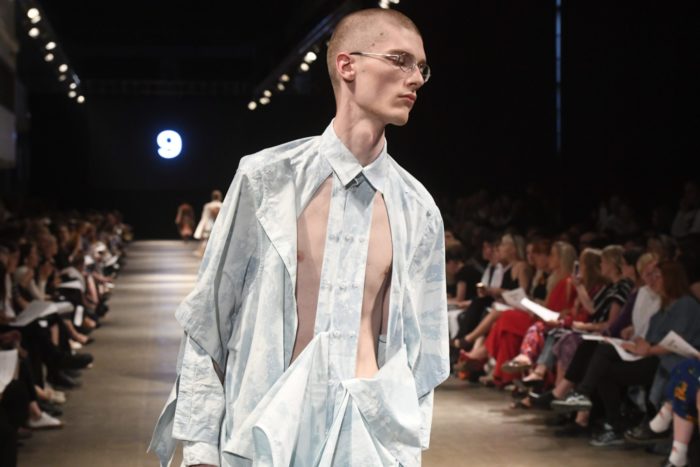 For designers, the Aalto University show offers an opportunity to “push your individual creativity and artistic ability as far as you can,” says Martta Louekari.Photo: Heikki Saukkomaa/Lehtikuva

Nordic minimalism remains part of Finnish fashion design, says Louekari, “but so are strong prints, colours and experimentation with materials. Designers here are now more interesting and ambitious; they’re bolder and taking bigger risks than those in, say, Sweden.”

One explanation lies in how brands are built. If you first figure out what the public or a certain customer segment wants and then respond to this demand with tailor-made products, you’re market-driven. In contrast, if a designer starts off with a vision and goals, and then collects a team to carry them out, the process is design-driven. Finland has a long history of design-driven design.

The history of fashion in Finland is relatively short. “That’s also why there isn’t a great amount of baggage or pressure,” says Louekari. “Instead, young designers get to work in peace. Growth is slow and organic, and maybe that suits us better than building fast-fashion brands.” 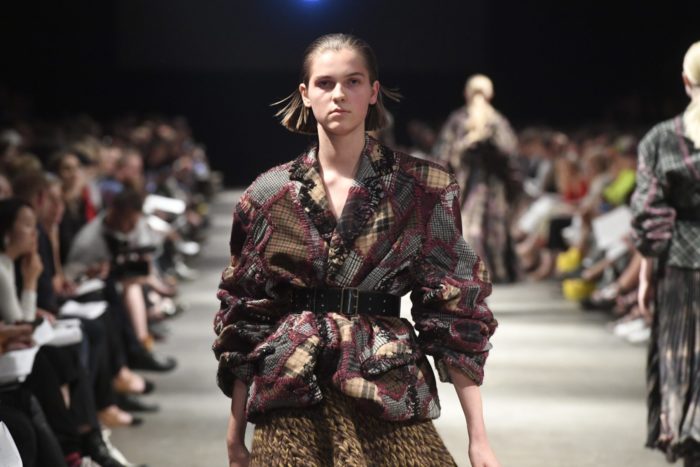 Finnish fashion is now attracting interest around the world. Perhaps the biggest factor contributing to this phenomenon is Aalto University’s ranking as one of the world’s three best fashion schools. By the same token, young designers who’ve studied there have enjoyed success at competitions, which in turn brings publicity.

“That’s the best manifestation of Finnish fashion,” says Louekari. “There’s no pressure to put together a commercial collection, but rather you can push your individual creativity and artistic ability as far as you can. From a media perspective, that leads to extremely interesting results, and if these collections happen to align with current phenomena and the changing trends of the fashion world, the results are often much more exciting than what the big luxury brands offer.”

There’s now room for new names and brands, but after graduation you also have to be able to convert appeal into business. In other words, an artistic breakthrough should be followed by a collection that people can actually purchase and use.

Organic growth and success can be achieved without intentional brand-building or spending thousands of euros on a marketing plan, but above all it relies on talented individuals who receive solid guidance.

Nowhere else is the same 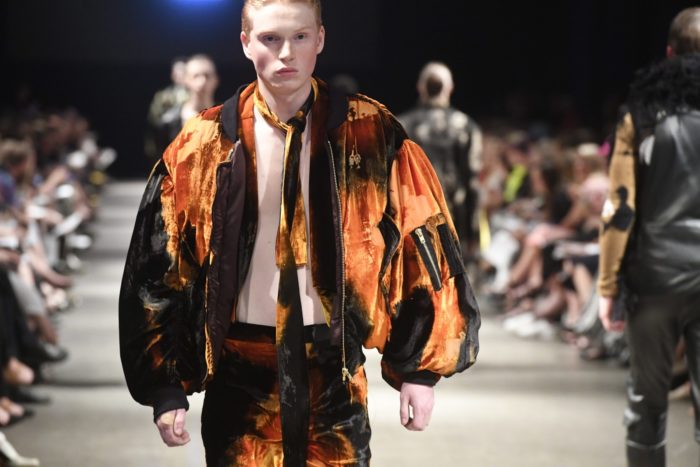 One of Finland’s biggest names in fashion design is Tuomas Laitinen, senior university lecturer in fashion at Aalto University. Laitinen, who began his studies at Aalto before graduating from London’s prestigious Central Saint Martins art and design school, established his own clothing brand and spent a decade in Paris before returning to Finland to teach.

His reason for returning was clear: nowhere else would have offered him the same freedom to pursue other activities alongside teaching, such as working on his own collection and on the highly regarded SSAW Magazine.

Laitinen says that many people outside Finland, including editors, curators and scouts, have played significant roles in the rise of Finnish fashion. 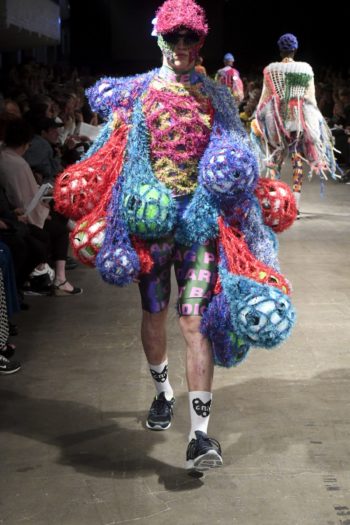 The 2018 show took place just before the soccer World Cup tournament began in neighbouring Russia, so it’s only natural that the sport found its way onto the catwalk, too.Photo: Heikki Saukkomaa/Lehtikuva

“A whole bunch of people in Paris, London, New York and Milan have been roped in to help,” Laitinen says. “In other words, Finland hasn’t planned this miracle all by itself. Nowadays there are people from the first generation of designers who studied at Aalto working in senior positions at the Paris fashion houses. And a few of our graduates have even become design directors.”

Student fashion shows are intended to serve as walking portfolios, but also to attract attention and spur new ideas. And now young Finnish designers’ open-mindedness is perceived as a great strength.

“Whether we’re talking about the luxury sector or mass producers, Gucci and Top Shop generally want to hire the same people,” says Laitinen. “What they’re looking for is maximum creativity. Everybody knows how to design white T-shirts and black trousers, but the value of our shows is something entirely different.” 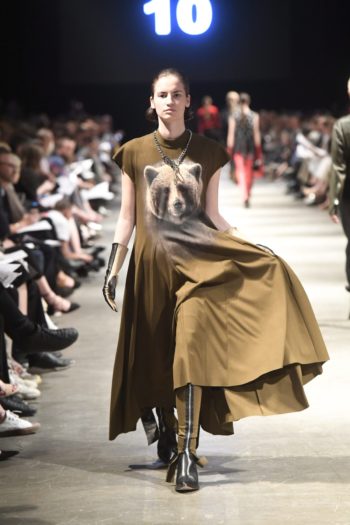 Nowadays Aalto’s annual spring show sells out immediately, and the world’s fashion houses are always there, scouting new designers. Aalto fashion students have one of the world’s highest employment rates, even though some don’t find work until a little later.

Seventy percent of them leave Finland, at least initially. Since there is no longer any significant commercial clothing industry in Finland, there are few alternatives for those who stay there to work. Laitinen doesn’t see this export of expertise as a problem.

“I think it’s really good that they go to learn the laws and practices of the fashion business, gather contacts and grow,” Laitinen says. Many of them return later and impart the benefits of their experience.

“On one hand, Finnish society is very egalitarian, but on the other hand we generally want to do things our own way,” Laitinen says. “We have an emerging generation we can be proud of. They’ve grown up to be multicultural, pluralistic and very broadminded. They dare to take risks, yet they’re still humble and ready to work hard.”

Children’s clothing designers in Finland look to influence the whole industry by designing clothes that are not only beautiful and comfortable, but also ethically produced, long-lasting and free from gender bias.