Travelling Finland with a Victorian view

We revisit the Finnish adventures of British author Mrs Alec Tweedie, whose book from the 1890s is now available online.

A party of bear hunters poses in Finland in the early 1900s by their cart, similar to those that Mrs Alec Tweedie and her sister would have used on their journey.

Tourism in Finland was very rare indeed, until British author Mrs Alec Tweedie visited the country with her sister. She wrote about their experiences in 1897 in a book called Through Finland in Carts, with a revised edition in 1913.

When preparing for her northern adventure, Tweedie was not even able to obtain a suitable guidebook or map of Finland. She did hear plenty of inaccurate rumours about the country, including that it was inhabited by barbarians, that polar bears roamed the streets and that people got around in the summer on sledges pulled by reindeer.

The sisters arrived by steamship in the port of Helsingfors – that’s the name of Helsinki in Finland’s other official language, Swedish, which was more prominent in those days. They found it a charming little town, but were surprised by the heat. They were also impressed that Helsinki was so advanced in using electricity, telephones and bicycles compared to London at that time. They roamed the city and made lots of observations. One of the restaurants Tweedie called delightful, Kapellet, is still popular today, and is now known as Kappeli.

Finland now and then 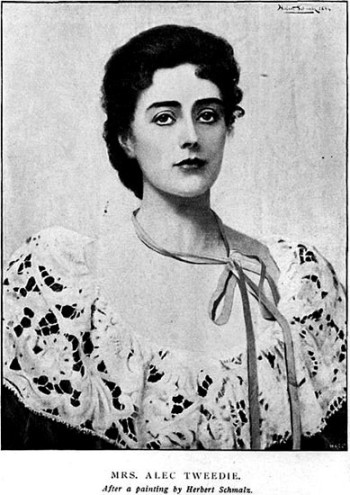 Mrs Alec Tweedie got the tourism ball rolling in Finland with her 1897 book “Through Finland in Carts.” Photo: Gutenberg Project/TM

Some things have certainly changed. Modern Finns have a reputation for being on time, but Tweedie stated, “No Finn ever hurried himself for anybody or anything.” She mentioned that Finns were not attractive, small, thickset, had high cheekbones and eyes inherited from their Tartar-Mongolian ancestors (a misconception of that time).

On the positive side, she said, “they read much and think deeply,” and “both rich and poor are wonderfully well educated.” She also described them as hospitable, generous, honest and kind. Furthermore, women’s rights in Finland, she observed, were more advanced compared to other countries.

The sisters voyaged by boat to Wiborg (now Vyborg, located in the slice of eastern Finland that was ceded to the Soviet Union during the Second World War) to stay at a country mansion where they discovered the Finnish smorgåsbord and brännvinn (local schnapps).

Also in the area that now forms part of Russia, they travelled to the original Valamo, located on an island in Lake Ladoga, to see the simple and ascetic life of the Orthodox monks. They attended the Sortavala Festival, in the village of the same name, to learn about Finnish music, especially folk music. They were intrigued by the Finnish national instrument, the kantele. At the same festival they attended a play written by famous playwright Minna Canth, who now has a street named after her in the Helsinki neighbourhood of Töölö.

An outside view of Finnish culture 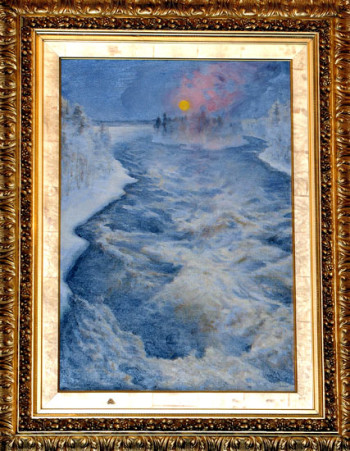 Akseli Gallen-Kallela, Finland’s most famous artist, painted this winter view of the magnificent Imatra Rapids around the same time that Mrs Alec Tweedie wrote about them for British readers. Photo: Sari Gustafsson/Lehtikuva

As for the concept of Finnishness, Tweedie devotes a chapter to the significance and intricacies of the sauna, describing her own experiences with Finnish bathing rituals. Another chapter is dedicated to the national epic, Kalevala. Tweedie not only recounts its history, meaning and societal value, but also quotes several translated sections of the work.

Perhaps the most entertaining component of the book is the sisters’ journey through the Finnish countryside in uncomfortable, horse-drawn carts. They stayed in peasant lodging, farmhouses, manor houses and even spent nights in Olavinlinna, a castle that is now the home of the renowned Savonlinna Opera Festival. They encountered the wildness of Midsummer’s Eve, viewed the unique beauty of Punkaharju, learned about forestry and tar making, admired the magnificent power of the Imatra Rapids and descended other frightening rapids in a tar transport boat.

Throughout the journey, they met friendly people who were fascinated by these strange foreign ladies. They sampled the local food – not always enjoyable – endured extremely long hours of primitive travel, encountered strange customs, and yet seemed to keep a good sense of humour throughout the journey.

Through Finland in Carts does not represent a flawless study of Finnish life at the turn of the century, but rather one writer’s discoveries in a strange, little-known land. An appendix goes into great detail describing Finnish politics at the time.

So, if you’d like to escape the pressures of modern life for a while, get hold of this book (online booksellers list several modern reprints, and a Project Gutenberg ebook is available free) and return to a simpler, quainter Finland.

Roughing it in exotic Finland

The co-author of a new guide to Finland tells how the book was made, drops travel tips and reveals what’s best about the Finns.