Room for a view: Extra sunshine is irresistible, and Lapland's got the most sun of all.

Everywhere in the world gets the same amount of daylight in a year, but this sunshine is shared out in very different ways. Due to the 23.5-degree tilt in the Earth’s axis in relation to the position of our local star in space, arctic regions face the sun round the clock during the high summer, when they get most of their daylight.

In winter, conversely, these lands are left in the dark for several months – but that’s another story.

Trek to the top

After the long Nordic winter, the call of this extra sunshine is irresistible. To make the most of the 24-hour daylight in mid-June, I set off for a late-night hike through the hills of this spectacular park.

From the now completely snow-free ski resort of Luosto, it takes less than two hours to follow the well-marked trails through atmospheric forests and heather moors to the summit of Luosto Fell, 514 metres above sea level. The last and steepest part of the climb is literally breathtaking – but then so is the panoramic view from the top over an unspoilt mosaic landscape of natural forests, bogs and lakes stretching off towards a range of bluish hills on the distant horizon. 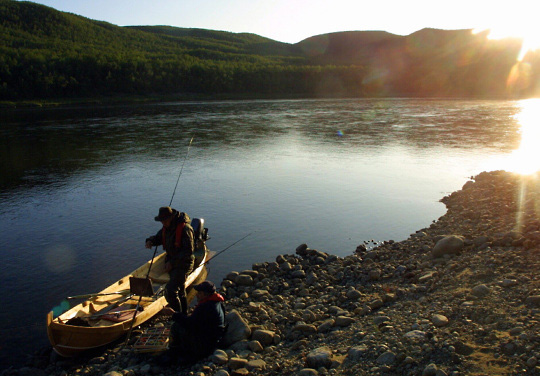 The midnight sun enables anglers to fish round the clock during high summer on the River Teno in Finnish Lapland.Photo: Pekka Sakki/Lehtikuva

I am thrilled to have the mountaintop all to myself at midnight. The only sounds are the plaintive calls of arctic birds, and a brisk wind that has fortunately kept any bloodthirsty mosquitoes off my scent.

Cynics might claim there’s nothing special about the midnight sun, and that daylight is daylight no matter what time your clock shows. But there really does seem to be something unusual about Lapland’s late-night light.

Sunset-watchers are often frustrated by the briefness of the event’s colourful climax, but the midnight sun naturally prolongs the ecstatic highlight of the whole sundown experience.

Getting the most out of life

On a midsummer night’s walk, your body might feel confused at first, having expected to wind down as usual. But the sun’s warming rays and vitamin D soon add a spring to your step, enabling you to remain active during the small hours you would normally waste in slothful slumber. Hiking in the midnight sun is a great experience for anyone who likes to squeeze as much from life as possible.

The further north of the Arctic Circle you go into Lapland, the longer you can enjoy the midnight sun. In Utsjoki, Finnish Lapland’s northernmost village, it shines from May 16 to July 27.

There’s only one midnight sun

Popular local postcards feature time-lapse images of the sun at various stages along its path, dipping down to a level just above the horizon at midnight before rising again. After receiving such a card, a mystified friend demanded the scientific explanation behind this baffling Finnish phenomenon of “the midnight suns!”