Not only is the Baltic Sea overlaid with ice, but clusters of beautiful ice crystals have formed on top of the ice cover, in this photo from near Helsinki in January 2021.

Geographical location and technological innovation have contributed to Finland becoming a leader in the field of icebreaking ships. Climate change is obvious in the Arctic region, but that doesn’t mean icebreakers are disappearing from the scene.

Research professor Jari Haapala, an expert on sea ice, serves as head of marine research at the Finnish Meteorological Institute. He says the Arctic is the place that is suffering most from climate change, with temperatures rising at twice the rate observed in other regions.

“There are no doubts that climate change is happening in the Arctic,” he says. “Every indicator is pointing in the same direction. Ice extent [the size of the ice-covered area], ice thickness, multiyear ice, etcetera, all show that there is less ice than before.”

Changing temperatures and a relative decrease in ice haven’t made transportation easy, however. “Regardless of climate change, it is important to remember that conditions in the Arctic are extremely difficult,” says Haapala. 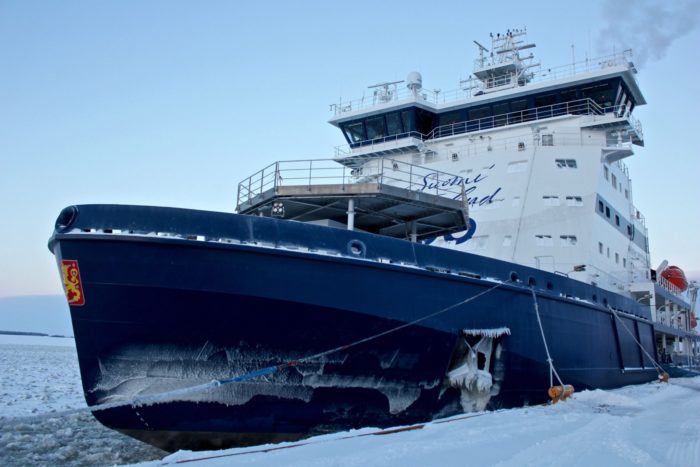 The Polaris, a Finnish icebreaking ship that Aker Arctic helped design and test, launched in 2016 as the world’s first LNG-fuelled icebreaker and plies the Baltic Sea.Photo: Sam Kingsley/AFP/Lehtikuva

“When discussing icebreaking and climate change, it is essential to distinguish between Arctic areas and subarctic areas, such as the Baltic Sea, Sakhalin and the Great Lakes area,” says managing director Reko-Antti Suojanen of Aker Arctic Technology. The company is known the world over for its icebreaking expertise, high-quality ship designs and innovative solutions.

In the Baltic Sea, even when the sea ice is thin, strong winds push the ice towards the shores and ports. In northern parts of the Bay of Bothnia, between Finland and Sweden, the ice breaks up and refreezes countless times during winter. This gives rise to thick layers of brash ice, defined as chunks of up to two metres (6.5 feet) in diameter. The same type of ice can also be found in Arctic waters.

Brash ice lives up to the adjective in its name. “It is particularly challenging for vessels to move in [brash ice],” Suojanen says.

Weather patterns in the Baltic Sea are becoming more challenging, straining the schedules that ships must follow to keep transport flowing. At the same time, in response to environmental regulations, the engine power of merchant vessels is decreasing, even as their size is growing. Diminished winter capabilities are the result.

“Therefore, more icebreaker assistance will be needed in the future,” says Suojanen.

How do they really break the ice? 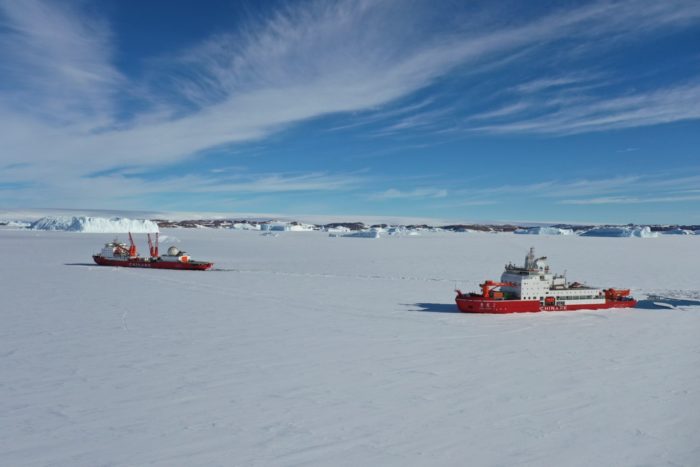 The significance of the Northern Sea Route as an export corridor from Arctic Russia to Europe and Asia increased during the 2010s. Special vessels and icebreakers are necessary to ensure safe, reliable passage in the icy Arctic waters. Technical and economic factors mean that transportation routes can traverse only areas with single-year ice.

To enable large-scale commercial transports in the Arctic, Aker Arctic developed and trademarked a solution called Double-Acting Ship (DAS) technology. To understand its components, we have to dive below the ice and explain two other terms: “azimuth propulsion” and “breaking ice.” As we’ll see, the latter is not as obvious as it might seem.

“Azimuth” is a term used in angle measurements in navigation. Azimuth propulsion refers to a thruster or set of propellers that can turn to point in any horizontal direction, making a ship much more manoeuvrable.

Then we need to understand how an icebreaker breaks ice. Unlike the way it might appear, an icebreaker does not really break the ice, but bends it downwards. Bending the ice requires much less energy than crushing it. This is the reason the icebreaking ship’s strong steel hull is not vertical – instead it is flat and almost horizontal. This type of shape is natural for the stern of the ship (that’s the back of the ship, to us non-sailors). Therefore, if the ships sails astern (in a backwards direction), it can break ice with less energy. The problem is that a vessel cannot be steered while sailing astern, unless the propeller is replaced by an azimuthing thruster, which can be turned 180 degrees when the ship sails astern.

Combining these two things resulted in a DAS-type vessel that can sail in two directions, ahead and astern. Sailing astern can be used for icebreaking, and normal ahead mode for sailing in open water. Astern mode is so efficient that these ships can break almost any ice, due to the flat shape and even propellers crushing the rest of the ice blocks.

Aker Arctic’s DAS-type vessels with high ice classifications are ships that brave the most demanding ice conditions. In addition to icebreakers, this can mean ships designed to operate without icebreaker escorts. Such innovations make commercial transport viable in the Arctic. At the same time, DAS also reduced, by half, the vessel power required, with a corresponding decrease in emissions. 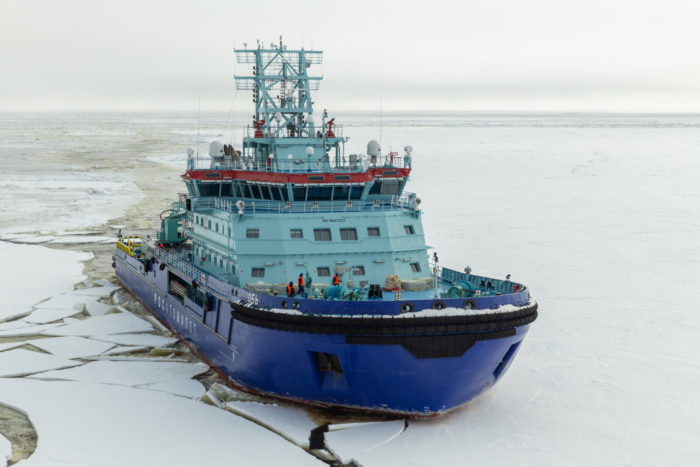 The port icebreaker Ob’s four azimuth propulsion units give it great manoeuvrability when it assists vessels in the Arctic harbour of Sabetta, Russia.Photo: Dmitri Lobusov/Rosatomflot

Using liquefied natural gas (LNG) instead of heavy fuel oil has additionally lowered pollution. LNG produces smaller amounts of carbon dioxide and nitrogen oxide emissions, and no sulphur oxide. LNG also does not emit black carbon, soot particles that are especially damaging to the Arctic and contribute to climate change.

Aker Arctic has designed large carriers for transporting LNG from Arctic locations. The LNG is stored onboard in large tanks that keep the gas at a temperature of minus 163 degrees Celsius (that’s minus 261 degrees Fahrenheit for anyone who’s keeping track). LNG is also playing an increasingly significant role as fuel for ships. The first icebreaker ever to use LNG is the Finnish icebreaker Polaris, designed by Aker Arctic.

The next step in reducing emissions is hybrid technology.

“Icebreaking requires high power, which cannot be achieved with batteries,” says Suojanen. “However, they can be used to balance rapid power variations, improving fuel efficiency. Other fuels, such as methanol, are also being explored.” 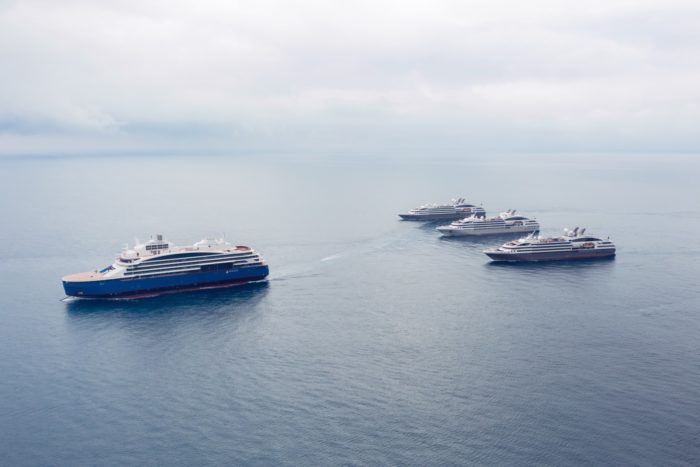 Recent examples of Aker Arctic’s steady flow of innovations include the polar exploration vessel and cruise ship Le Commandant Charcot, an LNG-electric hybrid, for the French company Ponant; the top-notch polar research vessel Xue Long 2 for the Polar Research Institute of China; and the superagile port icebreaker Ob for the Russian company Rosatomflot. The Ob, currently in Sabetta, northern Russia, can turn on the spot with its four azimuth propulsion units and is Rosatomflot’s only non-nuclear-powered icebreaker.

“Our next upcoming projects are an LNG tanker for year-round use in the Arctic, the first of its kind, and the design of a new Baltic icebreaker, which is ready for a fossil-free future,” Suojanen says.

“Ice-strengthened vessels and icebreakers will still be needed in the future. A vessel designed and built for its task and the conditions it will face is the best for both safety and the environment.”

Icebreakers are a great showpiece of Finland’s Arctic know-how. Take a cruise with icebreaker Sampo and try floating in the icy sea – an ice-breaking experience not to forget!

Polaris is the most environmentally friendly diesel-electric icebreaker in the world, a masterpiece of Finnish shipbuilding expertise.