A commuter bikes through the morning mist in Viikki, an area of northeastern Helsinki that is home to more than 10,000 people, a large nature preserve, and an arboretum with 400 species of trees.

At times, cyclists in Helsinki can hardly believe their luck. New cycle lanes both on and off roads, as well as indoor and outdoor racks for bike parking, seem to be materialising every week across the capital area.

It was already relatively easy to avoid road traffic on routes across town, but it feels like two-wheeled mobility has risen to a different level. This is good news for pedestrians, too, since the demarcation between footpaths and bike trails is clearer.

If the terrible circumstances of the coronavirus pandemic have any positive sides, one of them is the renewed enthusiasm for biking. Bike paths – and indeed any other facilities for public outdoor activity – have found even more eager users.

In line with the City of Helsinki’s strategy and recent slogan of building “the most functional city in the world,” the number of citizens opting for alternatives to private car transport has been increasing over the years.

People are keen to identify the greenest and quietest ways to get from A to B. The University of Helsinki has responded with its Green Paths journey planner for the Helsinki metropolitan area.

From A to B 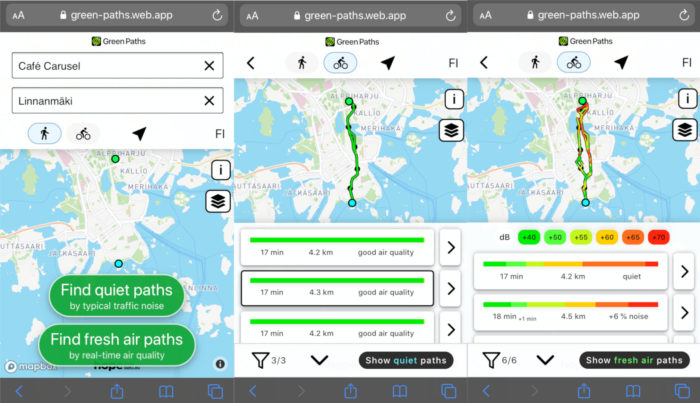 The Green Paths app start screen (left) lets you select from a number of routes based on air quality (middle) and noise levels (right).Photo: Screenshots from Green Paths app

The prototype comes in the form of a browser-based application that charts routes for pedestrians and cyclists according to two criteria: quietness and fresh air. Users simply key in the starting and ending points of their intended journey.

Green Paths uses data about average noise levels to find the quietest routes, and it accesses real-time air-quality values to show the routes with the freshest air. Colour-coded sections for each suggested route show variations in noise level and air quality.

The app is part of Healthy Outdoor Premises for Everyone (HOPE), a project instigated by the City of Helsinki and funded by the European Regional Development Fund. Unlike other journey planning apps, Green Paths is for active travelling such as cycling and walking, not for public transport or car travel. It is optimised according to noise, environment and distance.

It calculates routes on the basis of real-time air-quality data provided by the Finnish Meteorological Institute and open data on noise levels from the municipalities of Helsinki, Espoo, Vantaa and Kauniainen, which comprise the capital metropolis. 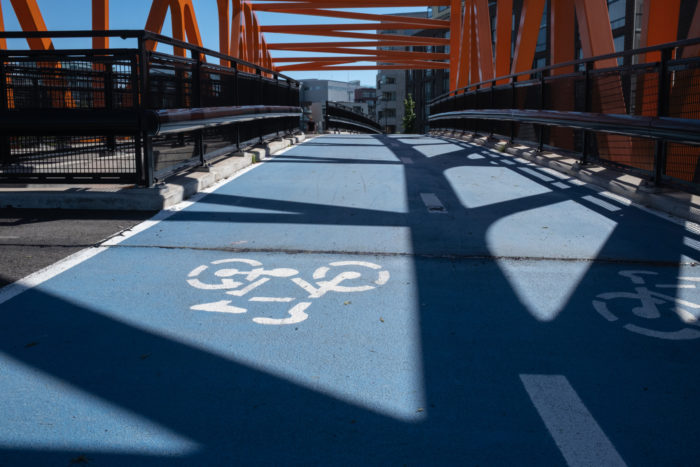 A bridge in the neighbourhood of Jätkäsaari on the west side of Helsinki casts geometric shadows across its blue bike path.Photo: Tim Bird

“Urban greenery and sustainability have been on the recent agenda of our department,” says Age Poom, a researcher on the team of the Digital Geography Lab at the University of Helsinki, “and this was a logical progression from earlier work on accessibility and mobility on one side and healthy green infrastructures in urban environment on the other. Master’s student and software developer Joose Helle had been working on exposure to noise, one of the biggest annoyances in the urban environment, and how to minimise it.”

Poom also mentions colleagues and team members Tuomas Väisänen and Tuuli Toivonen for their contributions to the project. Jussi Kulonpalo acted as project manager for the HOPE project at the City of Helsinki Economic Development Division with the aim of leveraging the app “to make Helsinki a better place to live for everyone.”

The path is open 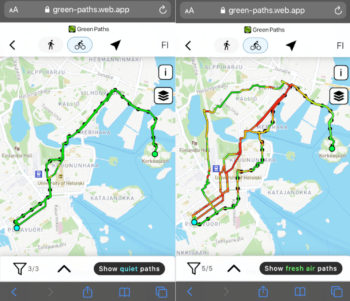 The app shows clean air (left) all the way from Sinebrychoff Park to Korkeasaari Zoo, but offers several options (right) for avoiding the sometimes noisy route through Kaisaniemi and Merihaka.Photo: Screenshots from Green Paths app

Green Paths is an example of the solutions and prototypes developed in the Lab. “Others can hop in and advance them,” says Poom. The code and client are open source, meaning they are freely available, even to other cities beyond Finland’s borders. The only constraint is the extent of environmental and street-map data available locally.

“We have received a lot of interest in the app, both within the context of the HOPE project and in the form of feedback from friends, colleagues and the Helsinki cycling community,” says Poom. “Our press release reached eight million readers globally. There is a feedback form in the app, and the next step is to gather street-level greenery data to develop functionality to support planning healthy and pleasant journeys.”

At the time of writing, Green Paths is available in Finnish and English, with a Swedish-language version in the works. It is suitable for browsers on mobile and desktop devices.

The best things in Helsinki are absolutely free

On a budget? You can still get the most out of your visit to Helsinki.