We check in with some Spanish nurses working in Finland as they settle in and hurdle over the language barrier.

Big step: After a selection process, around 60 Spanish nurses are now working in the Finnish health system.

A number of Spanish nurses, affected by their country’s financial woes, are choosing to apply for positions at Finnish healthcare services. They’re settling in well and are proving adept at bridging the language gap.

“The problem is not the language,” explains Irene Trigo, a qualified nurse from Haro, Spain. “If you really want to communicate with someone, you do!” In autumn 2012, she moved to Finland from her town in the Rioja region, known for its fine red wine.

Her colleague Ander Velado, also a qualified nurse, arrived with her and doesn’t think Finnish is such a difficult language. His mother tongue is Basque, spoken in the northern region of Spain.

“The Basque language also has declensions, like Finnish does,” says Velado. “So in that way, Finnish grammar is actually quite familiar to me.” Northern Spain was the focus for recruiting nurses, since it and Finland share significant aspects related to cultural adjustment: bilingualism and cold winter weather, though the latter is not on the same scale as in Finland. 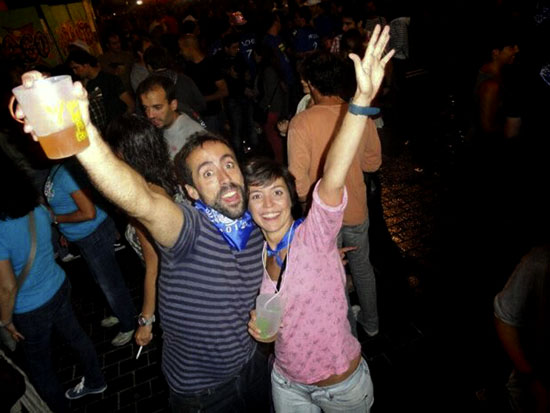 Nurses Ander Velado (left) and Irene Trigo were in a celebratory mood after receiving job offers from Finland. Photo courtesy of A. Velado and I. Trigo

After a long period of unemployment and temporary contracts, Trigo and Velado sent their job applications to Finland, which is experiencing a shortage of qualified nursing staff. They were two of the lucky ones – out of about 2,000 applicants, only around 60 were accepted.

Before their arrival to Finland they underwent a four-month crash course in Finnish language and culture. “I was studying Finnish 12 hours a week,” says Trigo. “It was quite intense. But the truth is that I didn’t use to know anything about Finland, except that it always achieves high scores in the PISA tests [the global Programme for International Student Assessment].”

The decision about how to travel to Finland was taken after a couple of beers. “One night at a bar in Bilbao, Irene told me that she was planning to go to Finland by car, and I just said ‘I’ll join you!’” Three thousand kilometres and two ferries later, they were in Finland.

“The trip was special,” Velado says. “We had four days to think about this big step we were taking. Going to an unknown country makes you think. We felt happy and a bit nervous at the same time.” 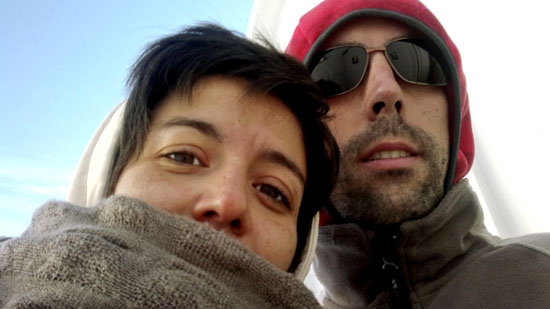 Trigo (left) and Velado are clearly enjoying life in Finland. Photo courtesy of A. Velado and I. Trigo

Trigo was assigned to work as an auxiliary nurse in an old people’s home in the community of Honkajoki. “Since the very beginning, I was excited about coming to Finland,” Trigo says. “Now I have my own apartment and a job that I enjoy! It’s great!”

Velado was assigned to the city of Pori, about 60 kilometres from Honkajoki, where he is also working with the elderly. “We are scattered around the country, but I try to keep in contact with the others that live nearby,” Velado explains.

Initially, all the Spanish nurses are working as auxiliary nurses until they are able to master the language. “We try to speak Finnish to the patients, and if we can’t manage we ask one of the employees for help,” Trigo says. “Both staff and patients are always willing to help – to start with they are shy, but in the end they are very friendly. Obviously we cannot work as nurses yet. I guess it’ll take a year or so.”

Velado, Trigo and their colleagues continue studying Finnish every week. The idea behind the recruitment of Spanish nurses is to try to ease the shortage of nurses in Finland, especially within elderly care. At the same time it may help alleviate Spain’s pervasive unemployment problem.

Velado explains that with Spain’s current economic crisis, Finland offers better living conditions, and that salaries for both qualified nurses and auxiliary nurses are higher than in Spain. However, no matter where you come from or where you travel, it always seems like some things are better back home. “I definitely prefer Mediterranean food to Finnish food,” Velado says.

The demand for skilled healthcare professionals is growing, and Finland is welcoming more staff from abroad.