Designers Wensi Zhai (left) of China and Miguel Moreno of Spain came to Finland and wound up working at Rovio, the company behind the stupendously successful game Angry Birds.

What happens when you fall in love with Finnish design and cannot live without it? You might just end up working in Finland’s cutting-edge mobile game industry.

When Wensi Zhai got hold of her first book about Finland, she was an undergraduate student at China Central Academy of Fine Art. At that moment she knew exactly where she wanted to go.

“The book impressed me,” explains Zhai. After reading the book, she began hunting for possibilities to move to Finland. “The pictures showed designs that I felt attracted to. I wanted to know more about Finnish design, and about the country’s lifestyle and natural environment. When I like something I can be blind to other things.”

Zhai’s friend and colleague, Miguel Moreno from Spain, tells a different story that is nonetheless familiar. Moreno’s first visits to Finland involved “a blonde lady with green eyes,” but he soon fell in love with the minimalistic shapes of Finnish design and art, too.

“I can’t understand how designers like Eero Aarnio or architects like Alvar Aalto or Eero Saarinen aren’t better known outside of Finland,” says Moreno. He soon started sending CVs to Finland and eventually closed the doors of his animation company in Barcelona.

Working with piggies and birdies

Pigs will get up to mischief. The game Bad Piggies developed as an offshoot of Angry Birds. Photo: © Rovio

Zhai achieved her goal in 2008 when she was accepted as an exchange student at Helsinki University of Art and Design, currently part of Aalto University. Today both Zhai and Moreno work at Rovio Entertainment, the Finnish mobile game developer and entertainment company responsible for Angry Birds and Bad Piggies. Zhai holds the position of junior graphic designer and Moreno works as lead character designer.

“Finland is an ideal country for professionals, especially within the fields of new technology and image,” explains Moreno, who started working at Rovio before the birds hit the big time and the company became a feathery franchise. “It’s a country for enterprising.”

As a company, Rovio is known for its high employee satisfaction, which they endorse by offering their employees freedom to be innovative. “The fact that I’m offered the possibility to work in different fields – from designing new characters to marketing and also creating ideas for new games – is fantastic,” Moreno says. “And on top of that, I get paid for it!”

For Zhai, the key is the working environment and the fact that in Finland “designers are really well respected by both clients and colleagues, and design in general is of a very high quality.” In a field where the designer has to “please the client,” respect plays a vital role. Currently Zhai is designing a book for Rovio. 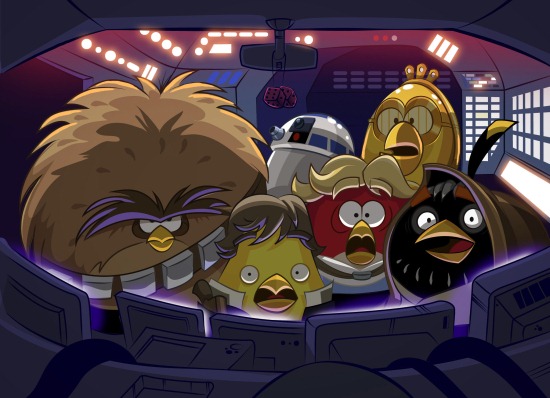 Movie-themed games are sometimes shunned by gamers, but if you’re playing the wildly popular Angry Birds Star Wars, may the Birds be with you. Photo: © Rovio

Zhai explains how important design is for her and where she gets her inspiration: “In Finland design is embedded in almost every object – a coffee cup in a cafeteria, a lamp in a restaurant. I can see this and it inspires me. Because of this I feel I can be more creative, outside the office as well as at work.”

In some Finnish brands, Zhai says, colour design “is not only colourful but at the same time very calm.” Marimekko has kept its Finnishness while also attracting international followers. “That’s good design.”

She is also inspired by the Finns themselves: “In Finland there is a sense of reliability. Most people are quite serious about their work and about responsibility. I like the straightforwardness of Finns – it makes work easier.”

The equally enthusiastic Moreno relies on the inspiration he gets from his colleagues: “At Rovio I have the luxury of working with fantastic artists and that nurtures me every day!

What else is expected in a company infused with talented animation and game designers, all excited about what they are doing? Even their movie-related games – a genre sometimes shunned by gamers – continue the success story, as seen by the way Angry Birds Star Wars has taken off.

With pigs and birds popping up at an astonishing speed, it’ll be interesting to see what Rovio’s employee count totals a year into the future. The company is on its way to becoming a real empire, and recently announced its first 3D feature film, to be released in summer 2016. It will be produced by John Cohen, whose previous productions include Despicable Me.

All we’ve got to say is: May the Birds be with you.