The demand for skilled healthcare professionals is growing, and Finland is welcoming more staff from abroad.

Demand for healthcare personnel is growing, leading to a more international workforce as institutions welcome an increasing number of employees from abroad.

Hanna Aschan, Manager of Nursing at Helsinki University Central Hospital (HUCH), believes there will soon be a great need for more skilled and trained healthcare personnel. The work will have to be reorganized and existing work communities primed to welcome staff from other countries.

“I should think initially they might be experienced, well-trained nursing staff from nearby countries such as the Baltic republics, Russia and maybe Poland, and also from Asia,” says Hanna Aschan.

“Qualifications should not be a problem with persons coming from European countries, because training systems have been harmonized. What may be much more difficult are cultural differences, familiarity with legislation, and of course language skills.”

For those with basic nursing qualifications, the supplementary training required to qualify them to work in Finland is provided. Hanna Aschan describes this training as quite a challenge and their supervisors also need additional training and skills in managing an increasingly international work community.

Language is a safety factor in healthcare 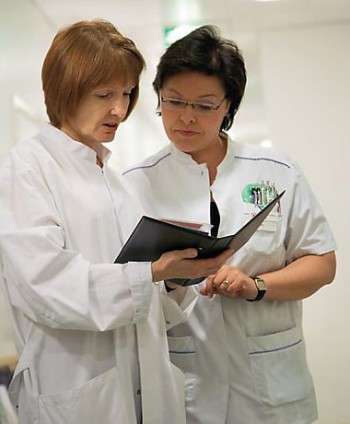 Language plays a crucial role in healthcare, at least for personnel dealing directly with patients. Under Finnish law, patients must be able to obtain service in their own mother tongue. Finland is officially a bilingual country, and thus nurses in bilingual regions, such as the greater Helsinki area, must be able to speak Finnish and Swedish. Inability to communicate could compromise patient safety. In current nursing culture, reading and writing skills in the patient’s language are just as important as oral communication.

“Still, it is probably only a matter of time before we have to start being more flexible about requiring employees of foreign origin to speak Swedish. We also have to take into account the need to know other languages in dealing with patients. We have to show more appreciation for the fact that an employee who has taken the trouble to learn Finnish may also already speak English, Russian, Portuguese, French, Spanish and a couple of other languages,” says Hanna Aschan.

Cultural differences are visible at the workplace. Employees may have different views about, say, punctuality, hygiene, temperament and how to approach certain topics of conversation. Religious views and traditions may also impose restrictions or procedural differences. For people who come from outside the Western cultural sphere, the Finnish way of life may pose challenges.

“In a multicultural work environment, matters such as dress and diet can pose a challenge for patients, for employees with different ethnic backgrounds, and for Finns in general. We should remember that there are people who are Finnish born and bred but do not look like ethnic Finns at all.”

As Hanna Aschan sees it, Finland’s perceived attractiveness often depends on the country the person is coming from. Finnish pay levels are low by western European standards, and housing costs in the Helsinki area are quite high. On the other hand, Finland can offer safety, a clean environment, good social benefits, expertise, and nature all around.

“You already hear people saying that in Finland the sky is blue, compared with grey everywhere else,” says Hanna Aschan.

She believes that a lot of immigrants would like to stay in Finland as long as their basic needs are in order, that is to say their work is appreciated, their salary is good enough, they find a suitable place to live, their partner, too, has a job, and there’s a school place for their children.