Peace education and conflict prevention are cooler than you think! Finland and its schools are focusing on them for Ahtisaari Day.

Conciliation and peace education are themes that permeate education and activities at Finnish schools. These students attend Itäkeskus Upper Secondary School in eastern Helsinki, where education includes ample opportunity for discussion and self-expression.

In early November, Finnish schools and the rest of the country observe Ahtisaari Day, focusing on peace education and conflict prevention. These principles are emphasised on a daily basis in Finnish classrooms and playgrounds.

Schools celebrate Ahtisaari Day on or near November 10. The event is timed to coincide with the nameday for Martti, a nod to former Finnish President Martti Ahtisaari, who was awarded the Nobel Peace Prize in 2008.

Conciliation and peace education are themes that permeate education and activities at Finnish schools. According to Sirpa Jalkanen, headmistress of Itäkeskus Upper Secondary School in eastern Helsinki, peace education and conflict prevention are core ideas that define the school’s entire operational culture.

“The good atmosphere here is based on the principle that every pupil in our school has equal worth,” Jalkanen says.

There are some 580 students between the ages of 15 and 19 at the school. This city-run school teaches a general academic curriculum as well as one with a focus on languages. Youngsters apply to attend based on their comprehensive school diploma. As at all Finnish secondary schools, tuition is free. 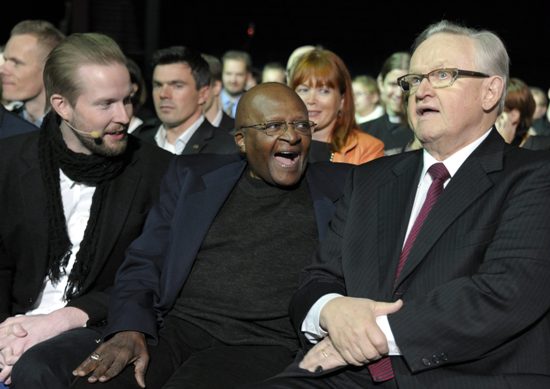 The school aims to prevent conflicts by ensuring equal, safe conditions for all members of the school community. Students and teachers relate to each other in a warm, open manner, evaluation of schoolwork and success is transparent, and established procedures exist for cooperation between pupils, teachers and parents. Education is discussion-based, with pupils encouraged to express themselves. The staff helps youngsters discover and develop their own talents, but also supports those who have trouble learning.

“This kind of basic attitude curtails tensions and competition between pupils, which in turn helps to prevent conflict-prone situations,” says Jalkanen.

The school looks after the pupils’ overall wellbeing and balanced growth, with support from the school psychologist, a social worker and a committee of support personnel, teachers and administrators that meets regularly. The school has also drawn up an equality plan.

“On a regular basis, we carry out an anonymous survey directed at every member of the school community to find out how well we’ve succeeded in executing our plan,” she explains.

The school community has also agreed on a bullying-prevention model and a crisis management plan, which is discussed annually by pupils in groups. There is immediate intervention when bullying is reported. Conscious attention is also paid to equal treatment regardless of gender or sexual orientation.

International education in the corridors 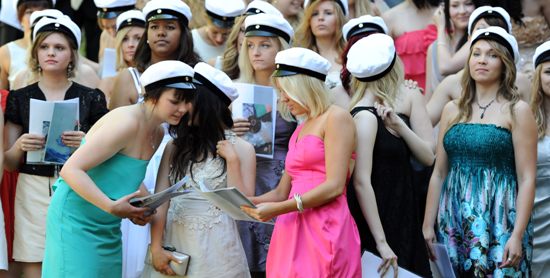 The teenagers we talked to at Itäkeskus Upper Secondary School, like many of their peers across Finland, aim to ace the matriculation exams and gain the honour of wearing the traditional white-and-black Finnish graduation cap.Photo: Jussi Nukari/Lehtikuva

About 20 percent of the school’s students are not native-born Finns. Along with Finnish, they speak 26 other native languages. Regardless of their backgrounds and native tongues, these youngsters have the same goal: to ace the matriculation examination and graduate as university-bound students.

The pupils’ multiculturalism and variety of backgrounds are considered a source of enrichment here. Around the time of Ahtisaari Day in November, the school observes Language Week, when the students introduce others to their native languages and cultures.

“As the pupils experience different cultures in their own day-to-day surroundings, this leads to amusing and useful discussions in our language classes, for instance, about national stereotypes,” says Heidi Kohi, who teaches Italian and English. History and social studies classes are also enriched by pupils’ experiences.

“Internationalism has become such a part of everyday life in Helsinki that young people nowadays don’t even worry about [issues of race],” Jalkanen notes.

Ahtisaari as a role model

Nobel Peace Prize laureate and former Finnish President Martti Ahtisaari has gained a global reputation as a mediator in conflicts between peoples. As he sees it, peace is a process that requires the broadest possible participation among all parties involved.

“Mediation does not take place at a state-leader level alone,” says Ahtisaari. “The execution of peace solutions requires contribution of entire societies and cooperation and partnership between various actors.”

This is the basic idea behind Ahtisaari Day observations at schools. Crisis Management Initiative, the nongovernmental organisation established by the former president, offers schools Ahtisaari Day materials, including mediation exercises, videos and guest speakers, depending on the schools’ wishes. Schools and classes can choose mediators from among their own ranks. Ahtisaari himself always visits several Finnish schools.

Ahtisaari Day is also celebrated at internet-based schools around the world during the first week of November. Environment Online (ENO) is a global, web-based school system that advances the teaching of sustainable development. ENO, which is based in Joensuu, has had a project lasting more than five years that aims to plant 100 million trees by the year 2017, when Finland celebrates 100 years of independence. More than 10,000 schools in 150 countries take part in ENO activities.