Martti Ahtisaari on the job in Aceh in August 2006, accompanied by Kalle Liesinen, who now works as executive director of Crisis Management Initiative. Photo: CMI

Diplomat and negotiator Martti Ahtisaari won the Nobel Peace Prize in 2008 for his achievements in helping to resolve conflicts in Namibia, the Balkans, Aceh and other troubled areas.

Over the years, former Finnish President Martti Ahtisaari has helped bring resolution to conflicts in Africa, Asia and Europe. His untiring work for the cause of peace is rewarded with the 2008 Nobel Peace Prize.

Ahtisaari has without doubt received more publicity in international affairs than any other Finn in recent memory. He served as president of Finland from 1994 to 2000. Upon leaving office he founded Crisis Management Initiative, where he is chairman of the board.

Diplomats, journalists and other informed individuals see Ahtisaari as straightforward, approachable and considerate. He is well liked in the multicultural environment of the UN, by many different nationalities and on many different levels of the organisation’s hierarchy.

Pragmatic, as a good mediator should be, he employs sound Finnish common sense and a clear vocabulary. He can also be tough when necessary, and speaks the truth openly, even if it means denting someone’s ego.

To make sure all angles are considered, he is known to employ a method that involves giving his aides an issue to discuss, then listening and selecting the ingredients that may be crafted into a successful proposal.

From teacher to diplomat 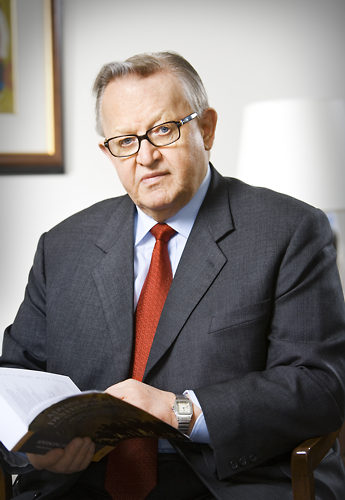 Martti Oiva Kalevi Ahtisaari was born in 1937 in Vyborg (Viipuri in Finnish), a town on the Gulf of Finland that belonged to Finland until 1940, when it was annexed by the Soviet Union. After national service in the late 1950s, Ahtisaari became a teacher and worked in schools in Finland and Pakistan.

From 1965 to 1973 he served in the international development cooperation department of the Finnish Ministry for Foreign Affairs. In 1973 he was appointed ambassador to Tanzania, also accredited to Zambia, Somalia and Mozambique.

From then on, in the words of the Norwegian Nobel Committee, he was to “figure prominently in endeavours to resolve several serious and long-lasting conflicts.” In Tanzania he gained a reputation as a specialist in African politics.

At the request of African leaders, the UN Secretary-General appointed him UN commissioner for Namibia in 1977. The following year he became the Secretary-General’s special representative for Namibia. In announcing that Ahtisaari had won the 2008 Peace Prize, the Nobel Committee noted that in 1989 and 1990 he played a significant role in the establishment of Namibia’s independence.

In 1999, under notably difficult circumstances, Ahtisaari crafted proposals to resolve conflict in Kosovo. When genocide was under way there, the Nato countries sought to exert pressure on Yugoslavia with an extensive bombing campaign. This did not appear to be enough in itself, and diplomatic efforts were required.

The task consisted of getting the US, its Nato allies, Russia and Yugoslavia to approve an agreement that combined all their minimum demands so that no one would feel they were suffering unduly. This time the challenge lasted only eight weeks, but was all the more hectic for its brevity.

In the autumn of 2005, Ahtisaari again turned his attention to Kosovo. He headed talks on the exceptionally complex topic of the future status of Kosovo.

The Nobel Committee recalls that in 2005 Ahtisaari and his Crisis Management Initiative (CMI) were central to the solution of the complicated matter of the Indonesian province of Aceh’s bid for independence. CMI was asked to facilitate talks between the Indonesian government and the Free Aceh Movement (GAM).

The first round of negotiations, actually the first face-to-face meeting between the parties since May 2003, took place in Helsinki in January 2005. Subsequent rounds of talks were held in February, April and May.

CMI then prepared a draft Memorandum of Understanding, which formed the basis for a fifth meeting in July. The agreement was signed on August 15, 2005. CMI was also present during the implementation phase.

Several sides to every story

Ahtisaari has also made exceptional contributions to settling conflicts in Iraq, Northern Ireland, Central Asia and the Horn of Africa. His solutions for international problems have not always been to everyone’s liking, of course.

His detractors have been particularly uncomfortable with his proposals for the future status of Kosovo. Hinting at such issues, Yuri Deryabin, eminent Russian diplomatist and former Russian ambassador to Finland, wrote in the Finnish newspaper Kaleva that Ahtisaari had not been awarded the Nobel Prize for the negotiations he had chaired over Kosovo.

Deryabin stated his belief that Ahtisaari had sincerely tried to advance the cause of peace in Kosovo, and added that he doubted whether critics had even read Ahtisaari’s proposals for that area. Ahtisaari had proposed “conditional” independence for Kosovo, which would have guaranteed extensive rights for the Serb minority.

The value of mediation

Between the operations in Namibia and Kosovo, Ahtisaari occupied the posts of UN Under-Secretary-General for administration and management, secretary of state at the Finnish Ministry for Foreign Affairs and chairman of the Bosnia Working Group of the UN International Conference on the Former Yugoslavia.

He is a member of the board of the New York-based EastWest Institute, as well as a member of the joint advisors’ group for the Open Society Institute and the Soros Foundations, which operate in various countries. He serves as chairman of the Balkan Children and Youth Foundation and Global Action Council of the International Youth Foundation, as well of the Governing Council of Interpeace.

Until 2003 he was a member of the board of directors of the International Institute for Democracy and Electoral Assistance (IDEA), and until 2004 chairman of the Brussels-based International Crisis Group. In early October 2008, Ahtisaari was also awarded the Unesco Peace Prize.

Ahtisaari’s Nobel Prize is welcomed here in Finland, a country that devotes much brainpower and money to the cause of peace. The Norwegian Nobel Committee refers to him as an outstanding international mediator who has shown, through his untiring efforts and good results, the value of mediation in bringing peace to international conflicts.