Beginning a new year in Finland

In the week after Christmas, people in Finland take it easy, saving up their energy for the big New Year’s celebration.

Seeing the light: Fireworks go off over Senate Square in front of Helsinki’s Lutheran Cathedral.

[Editor’s note: As 2021 ends and 2022 begins, Finland is abiding by coronavirus-related restrictions and recommendations about travel and social gatherings, so New Year’s Eve is still not back to normal. Nevertheless, you can read on to find out how New Year’s celebrations would usually happen. We hope to see everyone out there again on December 31, 2022. Happy New Year!]

When office Christmas parties start to subside around the middle of December, things get relatively quiet on the party front. Maybe everyone is concentrating on the holiday shopping rush. Finns generally hang around with relatives on Christmas Eve and Christmas Day. In the days that follow, they pay visits to friends and gather energy for December 31.

In Finland, as in many other places, New Year’s Eve probably forms the biggest party night of the year, although some would argue that the Finns get even wilder on April 30, the eve of May Day.

On New Year’s Eve, people host guests at home, meet up in restaurants, attend special gala dances and enjoy lively concerts. Eating well is essential on this occasion, and can mean anything from a tasty home-cooked meal to a calorie-rich buffet dinner. Many people consume quite a bit of alcohol on this night, which sometimes leads to boisterous behaviour. 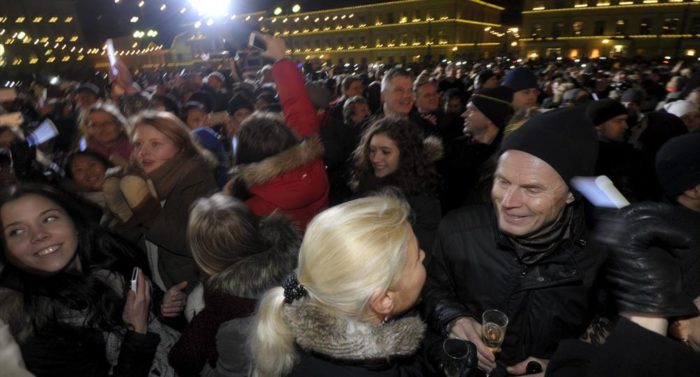 Helsinkians congregate to celebrate New Year’s Eve and make resolutions that they may or may not remember later.Photo: Markku Ulander/Lehtikuva

An indispensable part of New Year’s Eve for many Finnish people is fireworks. Sold in stores between Christmas and New Year’s Eve, they can only be used from 6 pm on December 31 until 2 am the next morning. At six o’clock you’ll notice a few displays of roman candles, bottle rockets and firecrackers. The frequency increases during the evening until the grand finale at midnight, when a spectacular amount of private fireworks are set off. Various towns, organisations and companies arrange public pyrotechnic shows that light up the sky.

On several occasions, I’ve watched this magnificent spectacle from the roof of an apartment building or the top floor of an office building. The best view I’ve experienced was from the Atelier Bar at the summit of the Torni Hotel (torni means “tower”). I had to arrive very early and wait for over an hour outside in the cold on the large balcony. Fortunately, the show was worth it.

National celebrations often take place on Senate Square in Helsinki. However, in recent years the focus has been shifting to Kansalaistori (Citizens’ Square), the plaza between the Music Centre and the Oodi library building.

Huge crowds gather to listen to speeches by the Mayor, the Bishop and other dignitaries, although I’m not sure if people are actually listening. There are live performances, light shows and singing. Even though it can be extremely cold, people are very enthusiastic and happy to be there. The event is televised and finds its way into many households and bars throughout the country.

When the clock strikes midnight, people say, “Hyvää uutta vuotta!” (“Happy New Year” in Finnish) or  “Gott nytt år!” (in Swedish, also one of Finland’s official languages). They toast each other with champagne or beer, shake hands, hug, kiss and say nice things to each other. Of course, most people want to start the new year on the right foot. So they make the usual resolutions, which they may not remember later, or may pretend not to remember.

A future made of molten tin 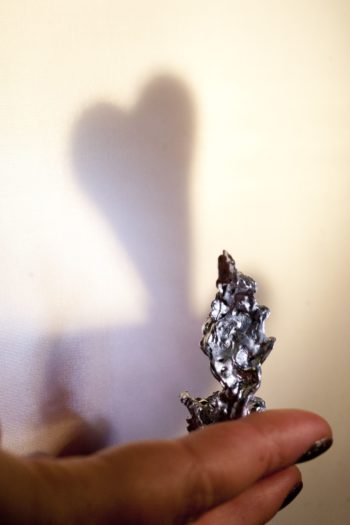 In a Finnish New Year’s Eve tradition, melted tin is poured into a bucket of cold water. The resulting random shape is interpreted to predict a person’s future. Photo: Seppo Sirkka/Lehtikuva

One fun Finnish tradition is melting tin. Miniature tin horseshoes are melted in a pan and poured into a bucket of cold water. As the tin hits the water, it cools and instantly resolidifies. The resulting random shapes are then interpreted to predict a person’s future health, wealth or happiness. Whenever I’ve participated in this type of fortune telling, I’ve received only positive news. In fact, everyone else did as well.

All this partying is hard work and gives you a hearty appetite. Normally, those revellers who have continued into the wee hours of the morning eat potato salad, sausages or something salty. One popular snack is Jansson’s Temptation, a casserole made of potatoes, onions, sprats or anchovies, bread crumbs and cream. Delicious!

On New Year’s Day, Finns like to sleep in late. Many will wake with an urge to take a pain reliever. However, others are up at the crack of dawn spending the first day of the year skiing, strolling through the park or getting some fresh air in a forest. It goes without saying that coffee is consumed in record quantities this day.

Popular programmes on TV include the President’s speech, the Vienna New Year’s Concert, and vintage Finnish movies. Later in the day, many people like to have a good meal. This is a great time to savour traditional Finnish fare such as fish dishes or a meat stew.

Some Finns feel this is a fine day to take it easy, but others think they should start the year’s first evening with a bang. Let’s party some more!