Who do you think deserves the next edition of the Finland-based International Gender Equality Prize?

Do you know of someone who builds and defends equality? From October 25 to December 31, 2018, you can nominate a candidate for the next International Gender Equality Prize, a biennial award presented in Tampere, Finland.

The International Gender Equality Prize is a biennial award presented in Tampere, Finland. The previous award went to Angela Merkel, the chancellor of Germany.

Gender equality is important to Finland, and it’s a crucial issue all over the world.

Created in 2017 to help celebrate Finland’s 100th anniversary of independence, the nonpolitical International Gender Equality Prize is awarded in the central western Finnish city of Tampere. The next edition will be presented in autumn 2019; from October 25 to December 31, 2018, anyone anywhere can go online and submit a suggested recipient.

The Government of Finland awards the prize based on the recommendation of an independent jury, which considers the nominations people submit.

The organisers are looking for “a distinguished builder and defender of equality.” It can be a person or organisation anywhere in the world. What matters is their work to “advance gender equality and its impact.” The winner does not actually get the prize money, which totals 300,000 euros, double the amount of the original edition of the award. Instead, they choose “a cause, an innovative endeavour or action that promotes gender equality” to receive the sum. 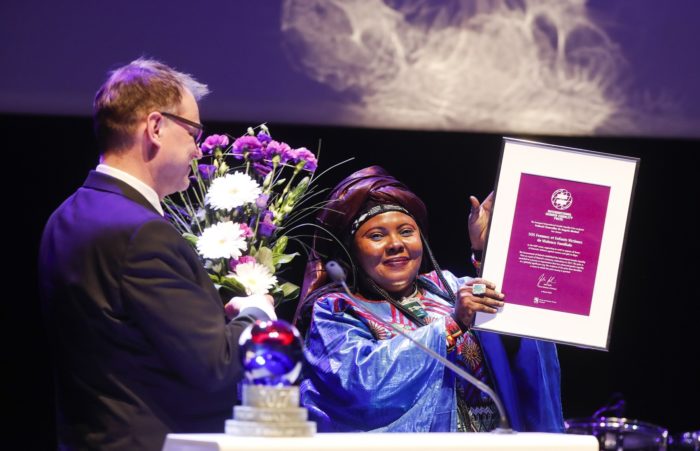 In 1906, Finland became the first country in the world to grant full political rights to women – they gained the right to vote (a first in Europe) and also the right to run for election. Finnish people have considered gender equality a guiding principle ever since.

Work still remains to be done, but Finland has repeatedly placed in the top two or three in studies and rankings that measure gender equality and women’s wellbeing. It is usually joined at the top by other Nordic countries. In Finland at the time of writing, women make up 42 percent of Parliament, 23 percent of board members in listed companies and 39 percent of board members in state-owned companies. Six out of the 17 government ministers are women.

The inaugural International Gender Equality Prize went to Angela Merkel, the chancellor of Germany. Her life’s work has made her one of the world’s most influential people and an example to many women and girls. She chose to direct the money to the nongovernmental organisation SOS Femmes et Enfants Victimes de Violence Familiale (SOS Women and Children Victims of Domestic Violence) in Niger, which is establishing a residential shelter for victims of gender-based violence.

A post on the International Gender Equality Prize website encourages you to suggest a recipient: “We are looking forward to receiving excellent nominations,” it says.