Finland’s Adelina Engman (7) and Ria Öling (4) celebrate after Engman’s goal against Ireland in a match in the Finnish capital.

Elli Pikkujämsä is sizing up the Finnish national team’s chances ahead of Euro 2022, happening in England from July 6 to 31.

In the opening stage of every major international football tournament, one group stands out as tougher than the rest. At the women’s Euro 2022, this “group of death” is Group B, which pits Finland against three top teams: overall favourites Spain, eight-time winner Germany and a formidable Danish side.

“Finland is the underdog, but maybe we can use that as our strength,” says Pikkujämsä (born in 1999), who plays professionally for KIF Örebro in Sweden. “Teams like Spain really love the ball, but we’re compact and very good at defending, so maybe we can catch them off guard with some sharp counterattacks.”

Calm before the storm 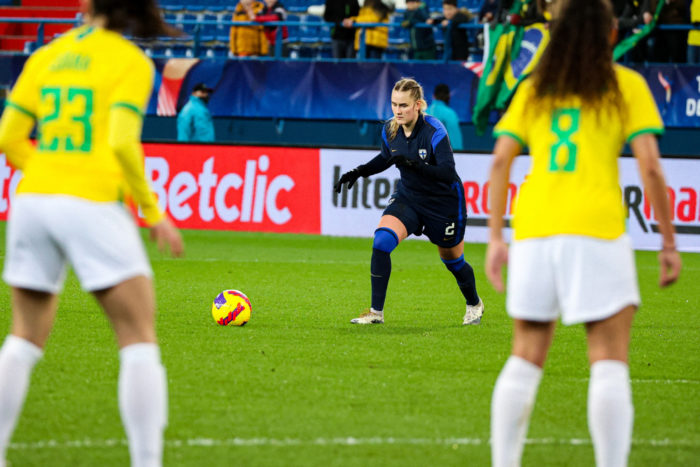 Elli Pikkujämsä (middle), a strong defender for the Finnish national team, takes a kick against Brazil at a tournament in France in early 2022.Photo: Jyri Sulander/Football Association of Finland

Watching her intensity on the pitch, you might think Pikkujämsä was born playing football, but she originally hoped to become a professional snowboarder, and won the silver medal in slopestyle in the 2016 Youth Olympics.

“I also have a long background in track and field,” she says. “My diverse experience in sports has helped me both physically and mentally. I think I’m good at reading the game and retaining my focus.”

Pikkujämsä’s mindset both on the field and off brings to mind words such as “focused” and “unflappable.” She is currently one of the names to watch on the Finnish national team, and receives praise from coach Anna Signeul for her calm determination.

“Elli is a talented young player with a great technique,” says Signeul, who has served as Finland’s head coach since 2017. “She can execute long and short passes with both feet, and her mastery with the ball can help her get out of tight situations.

“She has the ability to perform when it really matters. She handles pressure situations very well.” 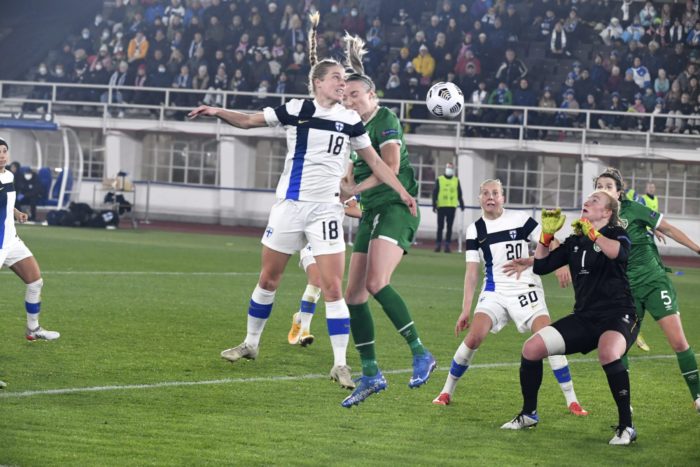 Linda Sällström (18) and Eveliina Summanen (20) of Finland pressure Ireland in front of a home crowd at the Olympic Stadium in Helsinki.Photo: Jussi Nukari/Lehtikuva

Signeul knows the lead-up to the finals will be intense, with the media spotlight adding pressure that many players have never experienced before.

“We’re working hard to provide our players with pressure-coping strategies,” she says. “We have a psychologist, a nutritionist and a technical coach giving individual and group support, and we’re increasing the training intensity.”

After preparation matches against the Netherlands and Japan and a final camp from June 20 to 28, the team arrives in England on July 4.

Comradery and solidarity are among the squad’s strongest mental assets, says Pikkujämsä. “Everyone knows their role, and we perform well as a group. We all have different personalities, but we get along really well. We socialise off the pitch, and we’re genuinely keen to help each other improve.”

Finland is among the countries that have worked steadfastly to raise the status and visibility of women’s football. “We’ve come a long way,” says Pikkujämsä. “We’re very proud to have qualified for the finals by beating high-ranking teams like Scotland.” 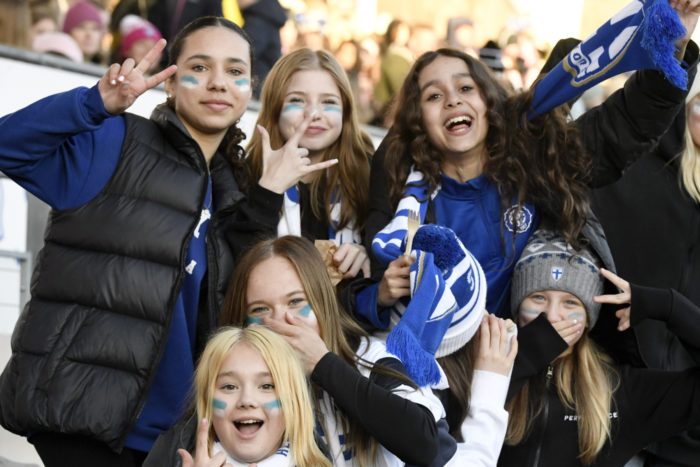 Pikkujämsä adds that the Boreal Owls have inspired many young Finnish girls to take up football recently: “There’s even a campaign to encourage it – every girl who starts playing gets a free football.”

Scepticism about the level and value of women’s football unfortunately persists in some quarters, but such outdated attitudes are doomed to fade. The world champion US women’s soccer team recently won a legal settlement against their own national federation about equal pay and conditions compared to the men’s team.

Pikkujämsä urges doubters to keep their minds open. “In terms of game strategy, women’s matches are just as interesting [as men’s games],” she says.

When asked to pick the winner of the upcoming finals, Pikkujämsä gives a cryptic smile. “I want to say Finland,” she answers, “but let’s just say that I’m pretty sure that someone in our group will take home the trophy.”