Finland’s Leo-Pekka Tähti salutes the packed stadium after winning gold in his 100-metre sprint event at the 2012 Paralympics in London.

Finland’s top Paralympian, Leo-Pekka Tähti, makes the case for even more support for “disabled sports.” Thanks to the winter and summer Paralympics and other world championships, there’s always a major event on the horizon.

According to Finland’s best-known and most successful Paralympian, Leo-Pekka Tähti, the most difficult part of a career in physically challenged sport isn’t finishing the race – it’s managing to get yourself to the starting line in the first place. The challenges are great enough in top-level sport if you’re able-bodied. People with disabilities have to fight even harder if they have ambitions to be Paralympians – and it offers no advantage if, like Tähti, you have a surname that means “star.” 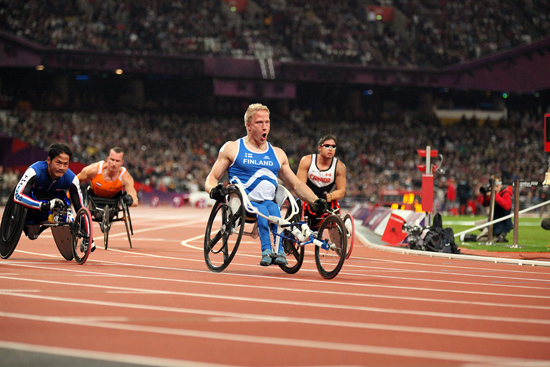 Leo-Pekka Tähti whoops it up after crossing the finish line in London at the 2012 ParalympicsPhoto: Maiju Torvinen/Lehtikuva

Tähti took the gold medal in the 100-metre T54-class wheelchair sprint at the 2012 London Paralympics, clocking a world-record time. He has become a standard bearer for “disabled sports” in Finland and offers inspiration for future Paralympians.

“Ever since I was a child, I have been interested in sports and competing,” he says. “Competition is in my blood. I started wheelchair racing when I was 15, when I got a racing chair for the first time and I was able to try the sport properly. I didn’t have any role models.” Membership of a club, Porin Tarmo, formed the next milestone. “Sponsors were really hard to find at a time when there hadn’t been any success or publicity. Disabled sports also involve big expenses, and this is one of the biggest problems for disabled sports.” Tähti remains a member of Porin Tarmo. 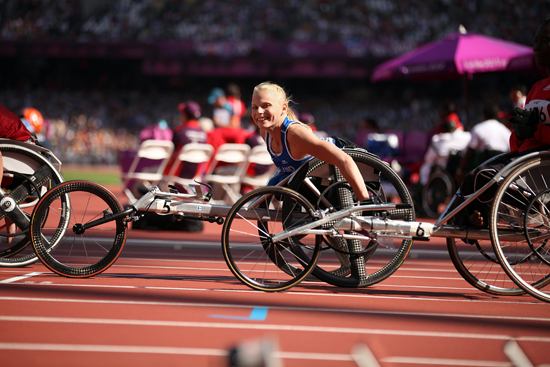 Finland’s Amanda Kotaja smiles after qualifying for the 100-metre sprint finals at the London Paralympics; she set a new European record and came in fourth. Photo: Maiju Torvinen/Lehtikuva

In Finland the situation is relatively good for would-be Paralympians compared with many other countries, says Tähti. “For example, top disabled athletes can get Ministry of Education tax-exempt sports grants. Also, many of the disabled sports are integrated into an association, which is heading in a good direction.”

Even so, he believes that more could and should be done. “For success in the future, it should be possible to invest more in the recruitment of young athletes. The main threats are that promising athletes stop competing when those who are currently the best and most experienced stop.”

The allocation of lottery funds, for example, could be increased to help the Paralympics in the same way as it supports the Olympics.

Just the same, and not least because of Tähti’s high-profile Paralympic success, disabled sports have gained momentum in recent years in Finland. In 2014, for example, the city of Espoo hosted the International Blind Sports Association Goalball World Championships. 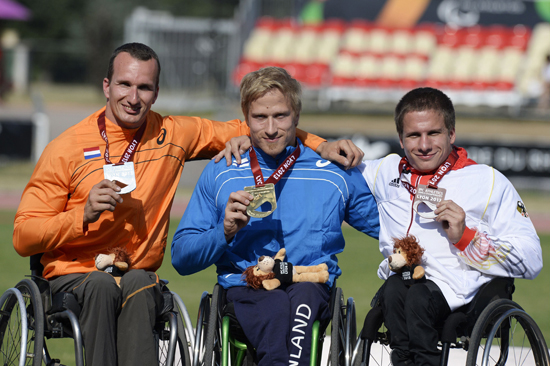 “The attitude of the Paralympian must be that of the top sportsman,” says Tähti. “You’ve got to love training and learn from your mistakes. No single sportsman rises to the top alone. He or she also needs support from [friends and family], as well as others in the sport.”

Tähti’s ambition still burns fiercely. “My success at London was just one of the wonderful high points in my career,” he says.

Täht also has his sights set on achieving a faster 100-metre world record at Rio de Janeiro in 2016 – and a fifth Paralympic gold medal!”