Books are close to the Finns’ hearts. On average, every Finn buys four books and borrows a dozen from the library each year.

An outing to the library – the library bus, that is. The route of a Finnish mobile library may include dozens of stops.

Literature is close to the Finns’ hearts, today perhaps more than ever. Over 20 million books are sold in Finland every year. That’s an average of four books per person, including children.

In Finland as elsewhere, readers are clearly divided into major consumers and others. Approximately one in every six Finns between the ages of 15 and 79 buys at least ten books per year. Together, these major consumers buy over half of all books sold. Overall, book buying is quite common: three out of four Finns buy at least one book per year. 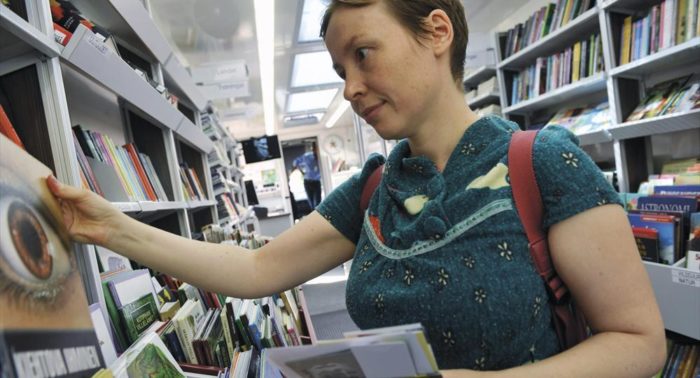 Even since the advent of the internet, the Finns continue to be drawn to books. “Browsing” can still mean looking at books at the library rather than online browsing.Photo: Viena Kytöjoki / Lehtikuva

The internet does not seem to have affected the popularity of books to any great extent. For example, in 1995 – before widespread use of the internet – far fewer books were purchased in Finland than today. So the popularity of books has grown in spite of the rise in electronic media. And book sales have grown even faster in terms of value than they have in volume – readers have been willing to pay more for their books.

Finnish fiction remains the most popular genre in Finland, although translated fiction still accounts for a solid share of sales despite having seen a slight fall. Approximately one in every three Finns has read Finnish fiction during the past month. Finns also read books on history and home economics (mainly cookery books), and memoirs, crime novels and children’s books. They are increasingly reading foreign fiction in languages other than Finnish.

Books have long formed a traditional gift in Finland. In this respect, the scene is changing, as people are more frequently buying books to read themselves. About half of the books purchased as gifts are given to family members – and will perhaps be read by the gift-giver, as well. 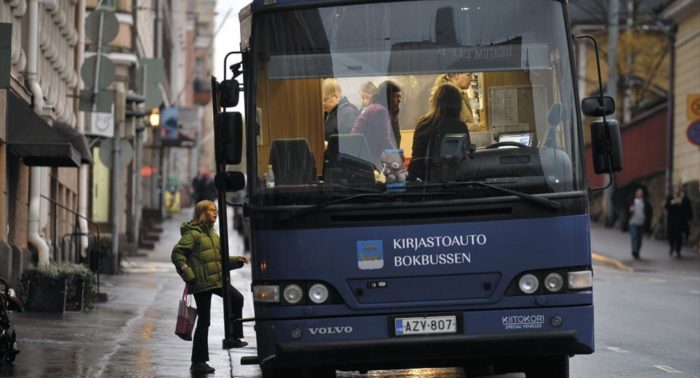 On average, each Finn borrows more than a dozen books from the library every year. Shown here is another of Finland’s mobile libraries.Photo: Heikki Saukkomaa / Lehtikuva

The modern mobile library carries a selection of over 4,000 titles, including not only books but also a range of magazines, newspapers and audiovisual materials. Mobile library routes comprise dozens of stops. Even in a relatively densely populated region such as southern Finland, a mobile library may clock up 50,000 kilometres annually – in the north, the distances are greater.

By European standards, Finland’s public library services are technologically advanced as well as substantial in terms of volume. Libraries are free to use, although small fees are charged for late returns.

Finland’s library services are quite popular and actively used – about 40 percent of citizens are active users and visit the library about twice a month. On average, Finns borrow a book from a public lending library more than once a month. Or, looking at it from another perspective, libraries contain just over seven books per Finn and each book is read an average of 2.5 times per year.

Libraries are also significant book buyers. Every year they spend well over 300 euros per citizen on the acquisition of books and other materials. Libraries also benefit writers: authors and translators can apply for library grants to fund their writing. These grants are also awarded to authors who are unable to work due to age or illness.

Although books account for a considerable proportion of public libraries’ collections, plenty more is on offer: magazines, newspapers and audiovisual materials.

Light, strong, warm and environmentally friendly, wood is making a comeback in construction and popping up in some unexpected applications.