Keeping Finland’s older citizens physically and socially active is of crucial importance for a society that is greying fast.

Swimming is a popular pastime in Finland, which has more than 180,000 lakes, and many people continue to swim or do water aerobics indoors to stay in shape after retirement.

Active older people are highly visible in Finland at all kinds of social and cultural events, and also in the great outdoors – often whizzing speedily by on skis or bicycles. The over-60 set already makes up 27 percent of the Finnish population, and their numbers are rising rapidly as the post-war baby-boom generation reaches retirement age. Finnish authorities are well aware that the future cost of caring for the country’s burgeoning ageing population represents a significant challenge. However, keeping older people physically active and socially involved can help offer a solution.

“Here in Finland our population is ageing faster than anywhere else in the world except Japan,” explains Eeva Päivärinta, a social and health services specialist from the Finnish Innovation Fund Sitra, where a recently completed two-year programme has focused on the need for services targeting senior citizens. “By 2030 it will be beyond the capacity of our economy to provide fully serviced old people’s homes in line with our traditional elderly care model, so we urgently need to find ways to offer effective online and home-based healthcare and other services for old people living at home.” 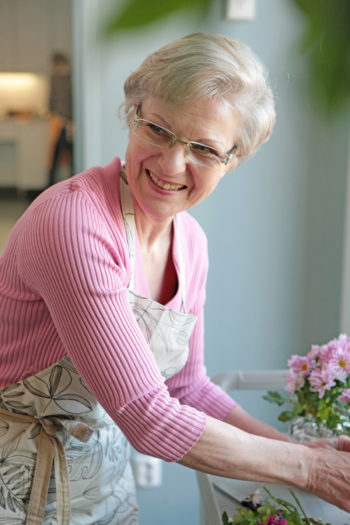 Gardening, whether on a windowsill, on a balcony, or in a yard, is a hobby that keeps mind and body active.Photo: Hernan Patiño

Average life expectancy for a 60-year-old in Finland is currently 84. Päivärinta emphasises that this longevity should be seen as a gift, though this will only be true if people can enjoy good quality of life in their twilight years. “It’s most important to listen to what old people themselves say they want. Our research shows that in addition to a safety net of residential care places for the neediest, they would greatly appreciate support enabling them to live in their own homes as long as possible.”

Finland ranked 14th in the 2015 Global Age Watch, an index that tracks the wellbeing of older people. The Finns scored particularly well on income security and enabling environments. According to Päivärinta, the innovatively funded national pension and social security scheme ensures that no pensioners need endure poverty, while the local authorities provide accessible facilities and discounts that make it easy for older people to use public transport, exercise in swimming pools, gyms, and parks, and visit museums, libraries, and theatres.

“Old people are often also active in Finland’s many local residents’ and pensioners’ associations, enjoying social events and trips – and they’re increasingly getting involved in voluntary schemes where they can meet and help other pensioners or schoolkids,” she adds. 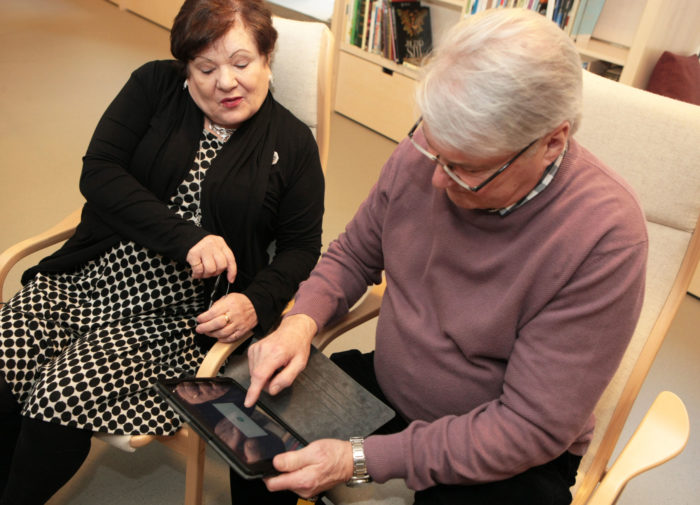 The Kotisatama cohousing project in Helsinki’s Kalasatama district is not a regular old-people’s home, but a new kind of self-service housing scheme. Residents Maj-Len Törnqvist and Frank Roehr check out the housework rota and forthcoming events on the housing community’s website.Photo: Hernan Patiño

Municipally subsidised service centres open to all elderly local residents provide a network of meeting places and facilities in Finland’s villages, towns, and suburbs. Some of these buildings also include conventional fully serviced older people’s apartments.

But Päivärinta still sees a need for new services to help people at home. “In Tampere we have piloted the Palvelutori [Service Market] staffed service-point scheme,” she says. It gives pensioners a central place to find out about all the different kinds of practical help and advice they can get through the health and social services systems and other initiatives. “Many useful services exist, and it’s often just a question of connecting people to them. The scheme has been very popular, and is already being expanded in Tampere and other towns.” In Turku a parallel online service scheme is being piloted in a Sitra-funded project.

The Finnish housing market must likewise adapt to the greying of the population by providing accessible homes that also meet retired residents’ social needs. Trial schemes where older people are housed together with students have proven helpful to both the youngsters and the oldsters. 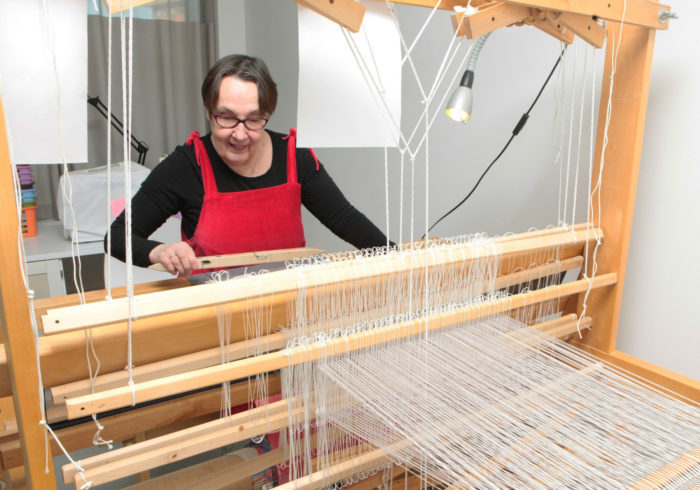 Kotisatama resident Mari Raunio working the loom in the handicrafts room open to everyone. In the building there is also a small gym, a library and games room, a laundry, a pétanque pitch, a roof garden, and two saunas.Photo: Hernan Patiño

“Kotisatama is not a normal old people’s home, but a new kind of self-service housing scheme,” explains resident Marjut Helminen. “In addition to looking after our own flats, we residents are grouped in housework teams who take turns cleaning our communal spaces and cooking the meals we can choose to enjoy together every weekday evening. This way of living appeals to people who want to keep control over their own lives, but who also enjoy a sense of community and activities organised together with their neighbours.”

Planning for an active retirement

In addition to 63 pleasant apartments, the totally wheelchair-accessible Kotisatama building has well-equipped shared facilities including a handicrafts and DIY workshop, a small gym, a library and games room, a laundry, a pétanque pitch, a roof garden, and two saunas. In the entrance hall beside Kotisatama’s spacious communal dining room and kitchen, an electronic notice-board shows news about activities, events, and housework shifts.

“Everyone makes the most of all these facilities, and we have lots of groups for people who share interests from singing, cinema, literature, and IT skills to card games, chess, bowling, and pilates,” says Helminen – who is certainly an active senior herself, as a keen canoeist who has also just published her first novel. Many of Kotisatama’s residents cycle regularly, and some even enjoy winter bathing in a hole in the ice of a nearby ocean bay.

Everything at Kotisatama has been meticulously planned in advance through the Aktiiviset Seniorit association by the residents themselves, who have an average age of 67 and an age range of 54–80. “Aktiiviset Seniorit has already started to plan its third cohousing scheme, and there’s plenty of interest from future residents,” says Helminen. “There would definitely be a need for many more cohousing schemes like ours – also for rented apartments.”

“It’s been wonderful to move into a ready-made community of neighbours, like a big family, where you can be on your own if you want, but also always have people to be with,” says Kotisatama resident Maj-Len Törnqvist. “In the future I don’t want to feel like a burden to my children – and they’re also very happy for me that I’ve found this kind of home.”

New lifestyle choices: A Finnish family builds a home where several generations can live comfortably under the same roof.

A Finnish dose of good health via apps
Business & innovationWellbeing