Celebrating the Finnish name of the day

People in Finland celebrate name days as well as birthdays. We look at a tradition that stretches back to medieval times.

Personalised for a wide selection of Finnish names, these bookworms (“reading caterpillars” in Finnish), will hold your page while you take time out to celebrate your name day.

In Finland, people not only celebrate their birthdays each year, but their name days as well. The tradition of assigning names to specific dates stretches back to medieval times.

Finns are renowned for their efficiency and organisational skills, so perhaps it may not come as a surprise to discover that a combined press run of around 14 million calendars is published in Finland each year. The practice of name days, whereby a name or set of names is assigned to each day in the calendar, has deep roots in Finnish culture.

“When you look at the Finnish name day calendar, you can see the history of Finland in a nutshell,” explains Minna Saarelma-Paukkala, head of the Almanac Office of Helsinki University, which is responsible for coordinating name days.

“This custom goes back to the Middle Ages. We also have some names on the calendar from the pre-Christian era, such as Väinö; then we have Catholic names, then Swedish names and some Russian names. Following this we have the Finnish names from the time of our national awakening, and then all kinds of newer names related to recent international influences.” 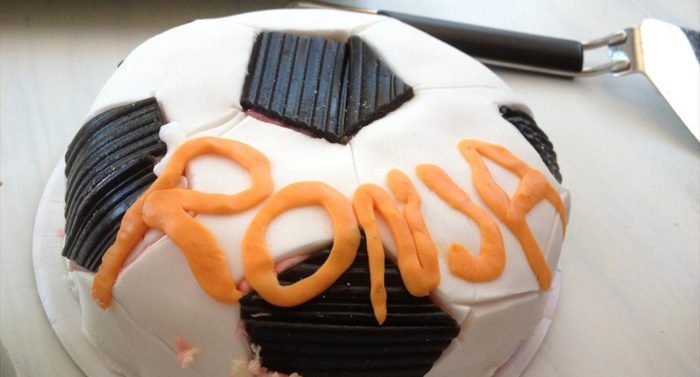 Nowadays name days are often celebrated with pastries, like this football-themed cake for Ronja.Photo: Sabrina Salzano

As the importance of name days changed over the centuries, so did the various traditions associated with it. Finns no longer put a name day tree on the table in the hope of having presents placed under it, nor do they raise a decorated pole in the backyard, yet the tradition still holds special significance for many people.

“Nowadays, it’s mainly coffee-and-cake celebrations,” Saarelma-Paukkala says. “It is good because some people don’t want to celebrate their birthdays, as growing old is not always so nice for everybody. But they can always celebrate their name day.”

The Finnish name day calendar presently contains 834 names; the list is updated every fifth year. The main criterion for inclusion is quantity – at least 500 children must have the name.

The list for 2015 contains a number of new names, yet none are being removed from the calendar. Due to fluctuating popularity over the years, Saarelma-Paukkala explains, many names will eventually return to favour. In addition, certain evergreen names, such as Matti, Juhani, Anna and Maria, continue to enjoy popularity among parents.

All kinds of name days 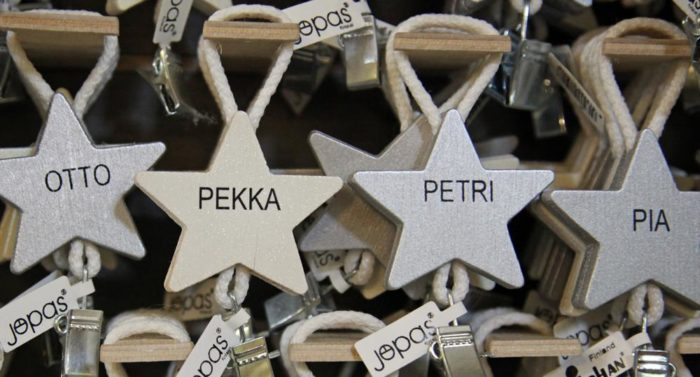 With these towel holders, everyone with a Finnish name can be a star.Photo: Sabrina Salzano

While some Finns have up to three names, Emma and Onni [the latter means “happiness”] topped the list of first names given to children born in Finland in 2013.

Meanwhile, the most popular first names among Swedish-speaking Finns that year were Ellen and Emil. (Finland is officially bilingual and 5.5 percent of the population considers Swedish its mother tongue.) In fact, Finland-Swedes also have a name day calendar of their own for celebrating Swedish-language names.

“Fifty registered Swedish speakers have to share the same name before it is considered for the name day calendar,” explains Leila Mattfolk, who is responsible for the Swedish name day calendar. “They have to be born 1965 or later, which also applies to the Finnish speakers.”

Finland’s indigenous Sámi people also have their own name day calendar. Furthermore, an Orthodox name day calendar recognises the days of saints that are observed by the 1 percent of the population that is Orthodox Christian.

Finnish name day celebrations don’t end there: “We Finns also have official name day calendars for cats and dogs,” Mattfolk says. “You can buy them in pet stores. They exist for horses as well.”

Discover the hidden meanings behind the names of some famous and not-so-famous Finns.