We take a brief tour of the cherished customs and events that Finns associate with Christmas.

Shoppers head home through the well-preserved old town in the southern Finnish city of Porvoo.

No matter how modern it may become, Christmas will also always be synonymous with age-old traditions. We take a look at the high points of the Finnish Christmas season.

In addition to the first weekend of Advent and the unveiling of outdoor Christmas decorations downtown, there are usually a multitude of pre-Christmas parties with friends and colleagues. Independence Day, December 6, isn’t technically related to Christmas, but it happens to be held during the same season.

The next milestone in the lead-up to Christmas is December 13, Santa Lucia’s day. It’s celebrated with a beautiful, singing procession led by a girl or woman dressed in white and wearing a crown of candles. This observance originally came to Finland from Sweden, where it became linked with Christmas because it happens to fall in mid-December.

Lucia was originally a Sicilian maid who defied her father by refusing to marry the man he had chosen for her. She suffered a martyr’s death. 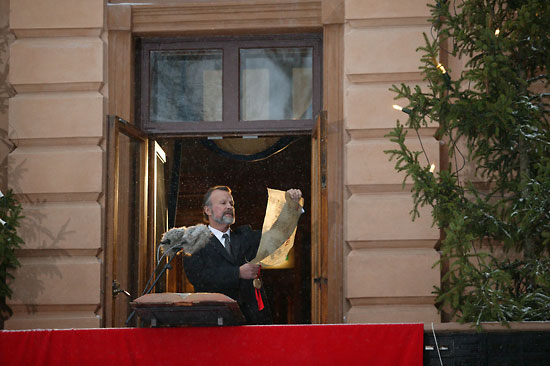 In a tradition that has roots in the 1300s, “Christmas Peace” is declared in Turku on December 24.Photo: Esko Keski-Oja/City of Turku

In the Nordic countries, the most important Christmas celebration takes place on Christmas Eve. Finnish traditions include the Christmas sauna and the preparation of Christmas dinner. The highlight of the evening comes when Santa knocks on the door and asks, “Are there any well-behaved children here?” Naturally, every home contains only good children, and they all receive presents.

Since Christmas Eve forms the most important day of the Christmas season in Finland, it is fitting that at noon on the Eve, “Christmas Peace” is proclaimed in Turku, the oldest city in the country. The tradition dates back to the 1300s.

The bells of the 14th-century Turku Cathedral sound in many a Finnish home as people view the age-old ceremony on television. Then the festivities begin.

Christmas Day is a time for rest and relaxation, like reading books that Santa Claus brought and eating food left over from Christmas Eve.

The Christmas tree is brought home on December 24 at the latest. A star is placed at the top of the tree and the branches are adorned with ornaments. The rural gentry and wealthy townsfolk began to adopt Christmas trees in the 1820s. The earliest account of a Christmas tree inside a Finnish home dates from the year 1829, when Helsinki dignitary Baron Klinckowström placed eight of them in his reception rooms. 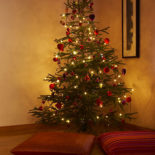 The Finnish Christmas tree tradition got its start in the 1820s and became widespread in the late 1800s.Photo: Miemo Penttinen/Plugi

The population at large started adopting the tradition in the 1870s, first in the southwest and later in other regions. By the early 20th century, the Christmas tree was becoming a familiar sight in almost all Finnish homes.

There was a public outdoor Christmas tree in the town of Tampere in 1894. Helsinki authorities have placed a Christmas tree on Senate Square every year since 1930.

Helsinki has also donated a Christmas tree to Brussels every year since 1954, just as Oslo, Norway, sends one for Trafalgar Square in London.