The new cruise ship Viking Grace is the most efficient ship in the thriving Baltic Sea cruise industry. We find out why.

The cruise ship Viking Grace cuts through the water efficiently because of its streamlined hull design and its use of liquefied natural gas, a cleaner-burning fuel option.

The cruise ship Viking Grace, which entered service in January 2013, is the most efficient ship in the thriving Baltic Sea cruise industry. We find out why.

The engines are huge, the size of buses, and give off a volcanic roar that is only partially muffled by ear plugs. Deep in the belly of the ship, it is as noisy and hot as you might imagine an engine room to be. But there is no smell of fuel oil, no grease, no grime. It is very clean.

Without words, chief engineer Henrik Fröberg points at huge yellow pipes. Here is where the fuel comes in, he is explaining. Here is where it goes into the engines. He’s showing what makes the Viking Grace cruise ship so innovative. Currently it is the only ship in the Baltic to be fuelled entirely by liquefied natural gas (LNG). 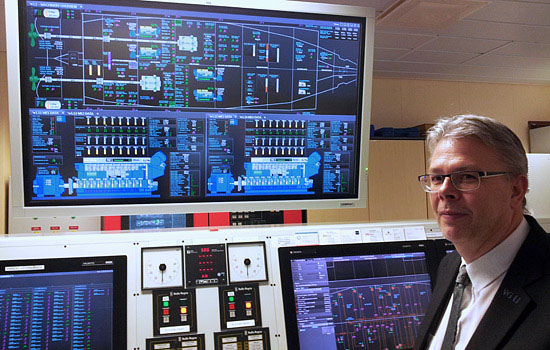 “LNG has only 85 percent of the carbon dioxide emissions of heavy fuel oil,” Fröberg explains in the quiet of his office. “Nitrogen oxide emissions are 12 percent. Particulate emissions are only about 10 percent; sulphur dioxide is practically nothing. This is the future.”

The Viking Grace is part of the thriving Baltic Sea cruise industry and plies the route between the southwestern Finnish city of Turku and Stockholm, Sweden, with an intermediate stop at Mariehamn in the picturesque Åland Islands. The passengers are going to visit friends, or want to take advantage of tax-free shopping, or are simply enjoying the entertainment on board, but all seem to know about the LNG fuel. Viking Line makes sure every crew member can answer questions – even a bartender says he has received training about LNG.

In 2015 strict regulations will come into force to limit emissions on the Baltic Sea. Viking Grace is the vanguard of a new generation of ships built specifically to meet these rules. The entire vessel was created to be efficient, from LED lighting to a hull that cuts more smoothly through the water.

“We have a sophisticated energy management system,” says Fröberg. “We have high-efficiency electric motors and pumps. Waste heat is recovered, stored, and re-used. We have motion detectors so lights aren’t on unnecessarily. There are speed control fans for the ventilation system. Even the chef can’t forget to turn the ovens off in the kitchen, because they are on timers.” 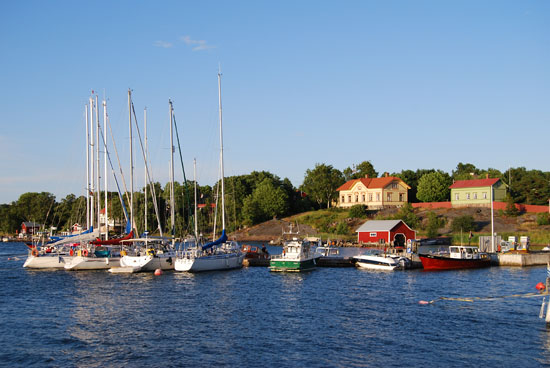 Passengers on cruise ships between Finland and Sweden pass idyllic archipelago scenes like this in the Åland Islands, an autonomous area of Finland located halfway between Turku and Stockholm. Photo: Lis Karlsson/Visit Åland

The crown jewel of the Viking Grace is the propulsion system. Although the ship has only used LNG so far, the engines are actually dual-fuel, and can use regular diesel if necessary. These special engines were developed by the Finnish company Wärtsilä, a global leader in the field.

Tomas Aminoff, director of Wärtsilä Ship Power, says they have received orders for these engines to power a wide diversity of ships in regions around the globe.

“We see more and more interest for LNG as fuel for cruise vessels, and we find it to be natural that the Baltic region, with its sensitive environmental balance and populated areas surrounding it, will be a forerunner in LNG-powered vessels,” he says. “It’s one of the most economical, environmentally sound solutions available today, and with a dual-fuel engine, fuel flexibility is secured.”

Wärtsilä also helps with the entire natural gas infrastructure and the gas handling system, both on the ship and on shore. Viking Grace is bunkered, or refuelled, during a one-hour process in Stockholm while 2,500 passengers and 800 cars are unloaded and new ones come aboard.

“This vessel proved, once for all, that LNG as fuel is a totally viable option, even for the most demanding vessel with the highest safety standards,” says Aminoff.