It’s vital for the countries along the Baltic Sea coast to maintain a joint rapid oil-spill response capacity.

The grey waters of the Gulf of Finland south of Helsinki are dotted with ships and boats towing booms, scoops, brush-rollers and skimmers designed to remove spilt oil from troubled waters. The Finnish multipurpose pollution response vessel Louhi practises firefighting by spraying water over a target boat, as a Finnish Air Force helicopter buzzes past above them, overseeing the action.

“About 250 million tonnes of oil are transported through the Baltic every year, mainly from the Russian end of the Gulf of Finland, and these figures are rising fast,” says Bernt Stedt of HELCOM. “It’s vital for the coastal countries to maintain a joint rapid oil-spill response capacity, so we run exercises for our international HELCOM fleet of 70 response vessels to test procedures and identify scope for improvement.”

High risks in the Gulf 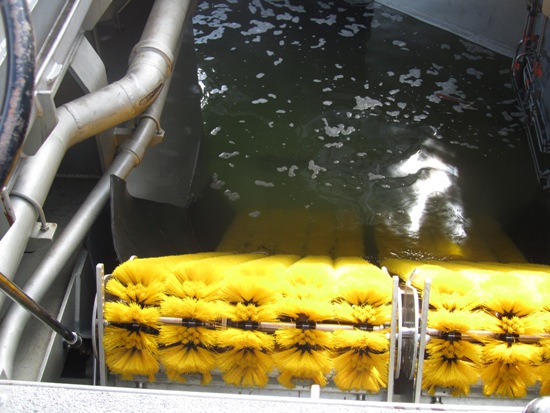 In addition to booms that can be lowered into the water, the Finnish vessel “Louhi” contains brush-rollers and other specialised equipment for containing and removing oil spills.Photo: Kati Tahvonen/SYKE

Each year one of the members of HELCOM – the countries around the Baltic Sea – host the Balex Delta exercise. When Finland last hosted the exercise involved a simulated 15,000-tonne oil spill in a high-risk zone in the Gulf of Finland, where passenger ferries and freighters shuttling between Helsinki and Tallinn cross the courses of oil tankers heading west from Russian ports. In parts of the exercise peat was spilt into the sea to simulate oil slicks. Popcorn was previously used in such trials, but it tended to be gobbled up too quickly by hungry seagulls.

Finland’s participation is led by the Finnish Environment Institute, the national pollution control authority (known by its Finnish abbreviation SYKE).

“SYKE runs a 24–7 hotline for oil-spill alerts. One of our three main vessels is always ready to respond to a spill within four hours,” says SYKE response commander Kalervo Jolma. “Cleanup efforts on the first day are vital. We reckon on a maximum of three days to act before oil becomes too dispersed to recover.” 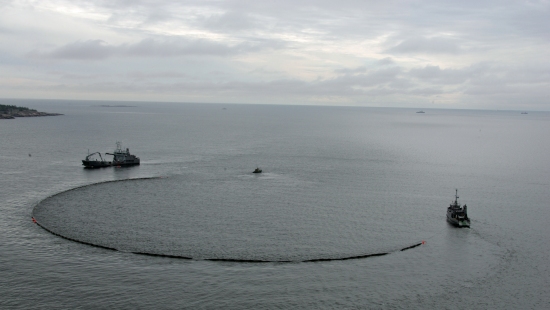 “Finland’s national response fleet of oil-recovery vessels is equipped with state-of-the-art technologies,” says Jolma. “Our strengths include the ability to recover oil even in problematic icy conditions. The completion of a brand new multipurpose pollution control vessel will further improve our response capacity.”

Many of the vessels practising cleanup procedures in the gulf use booms, skimmers and brushes bearing the logos of the Finnish company Lamor, a leading global producer of oil-spill recovery equipment.

All hands on deck 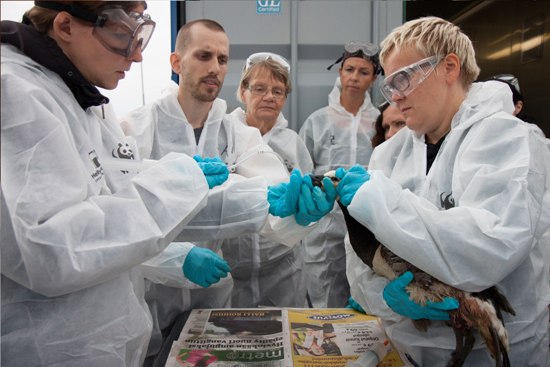 With a veterinarian present to supervise and instruct them, WWF volunteers increase their oil-spill readiness by practising tubefeeding a bird. (No wildlife was harmed during the exercise.)Photo: Alexandra Antell/WWF

Baltic marine and coastal ecosystems are highly sensitive to oil pollution. SYKE’s expertise on environmental protection is vital during oil-spill emergencies. The aim is always to recover as much oil as possible offshore, to minimise cleanup costs and ecological damage.

The Balex exercise also rehearses responses to ecological impacts. “It takes many pairs of hands to collect oil from polluted shores and to clean oiled birds,” says Jari Luukkonen of WWF Finland. “WWF have a network of more than 6,000 volunteers prepared to help, including hundreds trained to clean beaches or oiled birds.”

In addition to Finland, other members of HELCOM include Denmark, Estonia, the EU, Germany, Latvia, Lithuania, Poland, Russia and Sweden. The participating organisations emphasise that such exercises play a vital role by testing everyone’s readiness, and highlighting each country’s capabilities to help out their neighbours.