The “Sampo,” first launched in 1961, still operates in the northern Baltic Sea as an icebreaker and a tourist attraction, a reminder of Finland’s long, continuous history of icebreaking expertise.

Finnish ice technology is held in high regard all over the world. As activities in the Arctic increase and the Northern Sea Route opens up for traffic, all while environmental regulations become tighter, the demand for high-quality icebreakers and ice-strengthened cargo ships rises.

Each winter after the Baltic Sea freezes over, Finnish foreign trade depends greatly on efficient winter navigation. Icebreakers are necessary to keep ports and sea lanes open, and only ice-strengthened ships can move on their own in conditions dominated by ice.

This has led Finnish ice technology to develop to a world-leading level over the past 50 years. 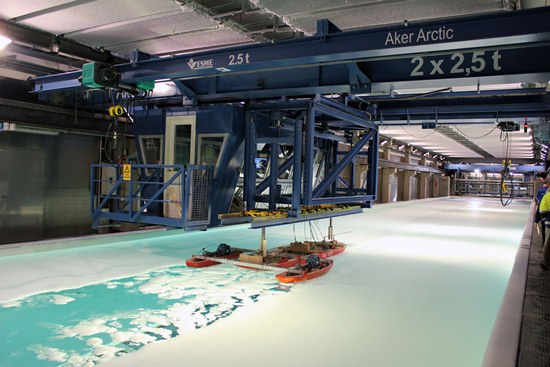 In an ice-testing basin, Aker Arctic conducts ice model tests for its vessels prior to construction. Photo: Aker Arctic

Aker Arctic’s current and recent projects include designing an icebreaker for the Canadian Coast Guard; a research vessel for the Polar Research Institute of China; a new 25-megawatt polar icebreaker for Rosmorport, a Russian government company that develops sea transport infrastructure, for escorting ships along the Northern Sea Route and the shallow waters of the Arctic Ocean and river estuaries; and a European research icebreaker intended for multidisciplinary polar research.

Need for reliable vessels in the Arctic 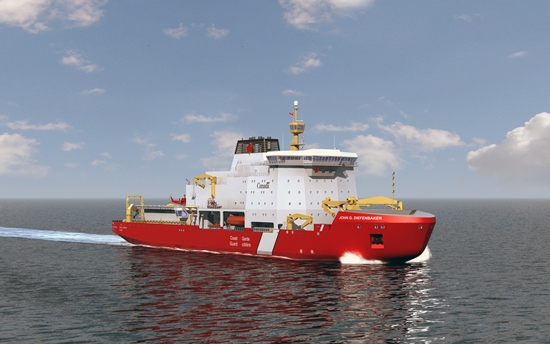 Aker Arctic played a major part in designing the “John G. Diefenbaker,” to be delivered to Canada’s Coast Guard in 2017. It will churn through ice 2.5 metres (6.5 feet) thick at 3 knots. Photo: Aker Arctic

“All activities in the Arctic are very sensitive, due to the fragile environment,” says Aker Arctic managing director Mikko Niini. “Conditions may also be very harsh, with multiyear ice, temperatures down to minus 30 degrees Celsius [minus 22 Fahrenheit] and location far from any infrastructure.

“We have a strong track record in development of polar icebreakers and a high engineering expertise for all kinds of ice-going vessels so our clients trust us to design vessels that need to perform at all times.”

An ice-testing basin contributes to Aker Arctic’s ability to stay at the top of its field. The company conducts ice model tests for its vessels prior to construction. It also maintains the world’s most extensive database on ice performance.

Clients for icebreakers include governments, shipping companies in need of reliable cargo vessels, and the oil and gas industry with its plans for drilling activities. 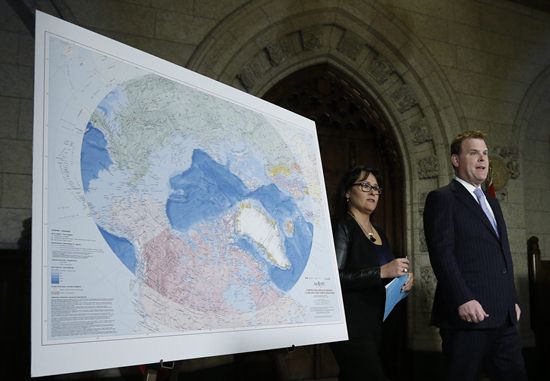 New environmental regulations such as the Environmental Efficiency Index, the Polar Code and the IMO sulphur emissions directive need to be followed closely. They mean that companies such as Aker Arctic have to adapt their designs to match the applicable rules, and must constantly find new ways to do things more efficiently.

“Our double-acting concept, where a ship moves ahead in open water and astern in ice, had a breakthrough in the Arctic many years ago,” says Niini. “These ships are able to work more independently and cost-efficiently in ice, and they use significantly less fuel compared to conventional ships.

“Other innovative concepts we have developed are the Oblique icebreaker and a Trimaran icebreaker. Both of them can create an ice channel twice the width of a traditional icebreaker although they are much smaller and therefore need less power and less fuel, resulting in fewer emissions. Also, efficient oil-spill response preparedness in areas where there is oil drilling or oil tanker traffic is an essential feature in icebreakers designed by Aker Arctic.”