May 8 is the birthday of Tom of Finland (1920–91), often called Finland’s most famous artist globally. Shortly after that anniversary, on May 17, the annual International Day against Homophobia, Transphobia and Biphobia (IDAHOTB) takes place.

In a scene from the movie “Tom of Finland,” Touko Laaksonen, or Tom (right, played by Pekka Strang), sits with his sister Kaija (Jessica Grabowsky) and his partner Veli Mäkinen (Lauri Tilkanen).

Born Touko Laaksonen near the southwestern Finnish city of Turku, he received the nickname Tom of Finland in the late 1950s from Bob Mizer, the editor of the magazine Physique Pictoral, which published Laaksonen’s homoerotic drawings. 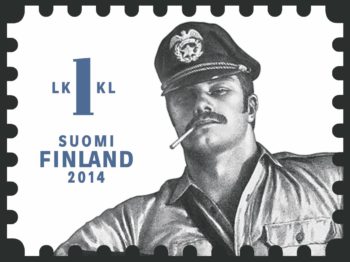 His hypermasculine characters became a significant part of gay culture, affecting the way homosexuals were perceived and how they perceived themselves. His work remains relevant, and still has a significant role in the way sexual minorities perceive themselves.

Tom of Finland grew up and lived much of his time in an environment where homosexuality was illegal (in Finland, it did not become decriminalised until 1971). His life has been the subject of a movie and a musical; both premiered in 2017. There’s even a Tom of Finland emoji.

The Finnish Postal Service’s most popular set of stamps ever is the one featuring Tom of Finland’s drawings, and Finnish textile manufacturer Finlayson has had great success with sheets, pillowcases, bags, socks, reflectors, towels and potholders based on Tom of Finland’s art.

Read more about the artist in an earlier ThisisFINLAND article. The Suomi-Finland Podcast released a special edition in 2020 for Tom of Finland’s 100th birthday: