Jonna (Roosa Söderholm, left) is enchanted by Piki (Maria Ylipää) in Baby Jane, a film based on a Sofi Oksanen novel and directed by Katja Gauriloff.

An unconventional rom com set in Finnish Lapland, a Nordic noir series based in the southeastern city of Lappeenranta, a suburban drama set in the outskirts of Helsinki: Contemporary Finnish filmmakers are telling stories unlimited by language, genre or geography.

Recent works include authentic explorations of the feelings of instability, uncertainty and isolation that young people face today. The films and TV series below have all enjoyed acclaim at home and abroad. While subjects and approaches may vary, each tells a distinctly Finnish, but universally powerful, story about the state of the world.

In this rom com, Aurora (Mimosa Willamo), a nail technician from Finnish Lapland, agrees to help Darian (Amir Escandari), an Iranian refugee seeking asylum for himself and his daughter. Recently profiled in Variety, the film is packed with relatable humour and sharp one-liners, but it also tells honest stories about alcoholism, poverty in the Arctic region, and the prejudices that refugees encounter on a daily basis. Aurora tackles global themes and universal struggles, viewing them through a Finnish lens.

Baby Jane is an arthouse adaptation of Sofi Oksanen’s novel of the same name. Oksanen is Finland’s best-selling living author, best known internationally for Purge (Finnish title: Puhdistus, 2008). The haunting film tells the tragic love story of two young women, Piki (Maria Ylipää) and Jonna (Roosa Söderholm), who meet in Helsinki. Jonna’s patience is tested by Piki’s ex, Bossa (Nelly Kärkkäinen), who is still an important part of her life. The film’s exploration of Piki’s mental health struggles and the impact on those closest to her is as affecting as it is compelling.

Bordertown is perhaps Finland’s best-known crime drama. At the time of writing, the first two seasons are on Netflix, with the Finnish premiere of the third season expected in October 2019. Upon reading that filming for season three was under way, Stephen King tweeted, “I have to get me some of this.” A Nordic noir television series, Bordertown shows what happens when detective inspector Kari Sorjonen (Ville Virtanen) gets a job as head of the Serious Crime Unit in Lappeenranta, 25 kilometres (15 miles) from the Russian border, and moves there with his family to lead a quiet life. Needless to say, more drama ensues than he could have ever anticipated.

Recently renewed for a second season, Deadwind tells the story of Sofia Karppi (Pihla Viitala), a forty-something homicide detective who returns to work too soon after becoming widowed. The 12-part series follows Pihla and her colleague Sakari Nurmi (Lauri Tilkanen) as they investigate a mysterious murder. The series has received international praise from the likes of Bustle and The Verge, and has amassed a cult following in Finland.

This is a heart-wrenching drama about a suburban teenage couple who discover that they’re expecting a baby before graduating from high school. As the audience follows the unconventional love story of Kiira (Rosa Honkonen) and Lenni (Jere Ristseppä), the journey leads them to consider issues including teenage pregnancy, class structure, multicultural society and far-right ideologies. Stupid Young Heart premiered at Toronto International Film Festival in 2018 and received the prestigious Crystal Bear award for the Best Film in Generation 14plus at the 2019 Berlinale Film Festival. 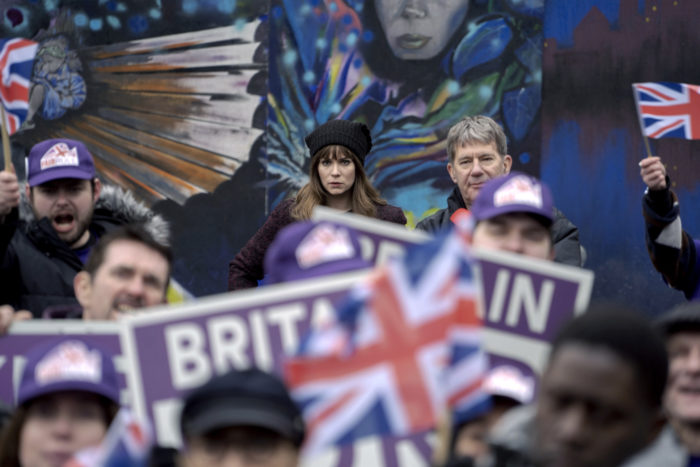 Pihla Viitala plays Mari in Cold Courage, which takes place in Helsinki, Dublin, London, Antwerp and the eastern Finnish region of Kainuu, and is based on Finnish author Pekka Hiltunen’s bestselling book of the same name.Photo: Luminoir

Cold Courage is an English-language crime drama that is set to premiere on Nordic streaming service Viaplay in 2020. The series takes place in Helsinki, Dublin, London, Antwerp and the eastern Finnish region of Kainuu, and tells the story of two young Finnish women, Lia (Sofia Pekkari) and Mari (Pihla Viitala), who live in London and belong to Studio, a secret agency that seeks to challenge the legal system and bring justice to those the law cannot help. The eight-part series is based on Finnish author Pekka Hiltunen’s bestselling book of the same name (Finnish original: Vilpittömästi sinun, 2013 – the literal translation of the Finnish title is actually “Yours truly”). The series’ international cast includes British actors John Simm and Caroline Goodall.