We talk to Baghdad-born Adel Abidin, who has been making art in Finland using an array of media for more than a decade.

Baghdad-born Adel Abidin has been making art in Finland for more than a decade, using a variety of media to address everything from gender roles to migration.

Baghdad-born Adel Abidin, who was chosen Artist of the Year at Helsinki’s Flow Festival in 2014, has been making art in Finland for more than a decade. His mixed background lets him provide viewers – and festival-goers – with new answers to classic questions of gender roles and migration.

Adel Abidin moved to Finland in 2001 with the woman who is now his ex-wife, and graduated from the Academy of Fine Arts in Helsinki in 2005. Since then he has worked as a visual artist both in Finland and abroad. For example, he represented Finland in the 2007 Venice Biennial with his multimedia installation Abidin Travels, which promoted a fake travel agency selling exotic trips to war-ridden Baghdad.

A pleasure to be an artist in Finland 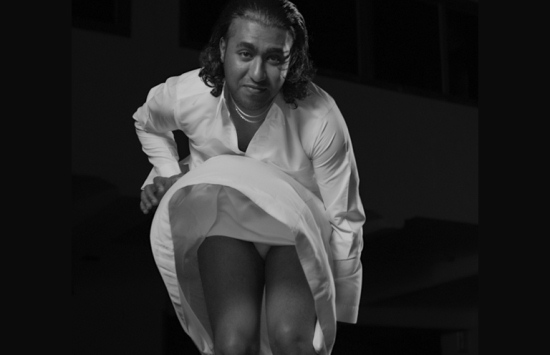 Abidin is based in Helsinki and considers it his home. “My studio is here, although my family lives in Amman,” he says. “I have lots of shows abroad and I’m always going back and forth. So it’s kind of convenient.”

He finds it rather easy being an artist in Finland. Abidin says that Finland has had a huge impact on his career: “Look at the grant system and the funding. They support culture. They support the young generation. When you have a good project they give you funding – they even push you forward.”

“Finland is a very interesting place to be, and although it was all unplanned, I like it here,” he says. “The people I work with are very professional. Of course I don’t like winter, but there is no ideal place on this earth.”

Classic themes not yet resolved 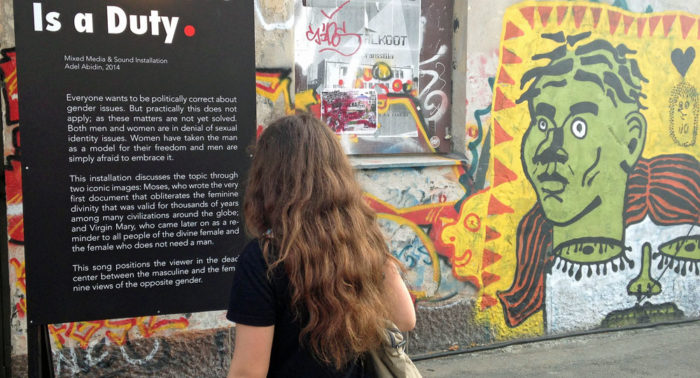 “Love for you is a duty,” an installation in collaboration with singer Astrid Swan, makes festival-goers think about women’s roles in society.Photo: Anna Ruohonen

The themes of Abidin’s work stem from society: “Everything that happens in a society will affect us. We think we are separated, but the world is actually a really tiny place.”

Abidin deals with many classic themes, which he laces with sarcasm and paradox: gender matters, wars, love, discrimination, manipulation, authority. “We suffer from them, or we might benefit from them. So I think it’s very interesting to deal with them using my contemporary language. By mixing the two cultural backgrounds I have, the Western and the Middle Eastern, I end up with the third culture, a third answer.”

Abidin works with videos, video installations, photography, sound installations, sculpture and other media. “Each concept decides what kind of medium it needs to be presented with,” he explains. “I don’t force the medium on a concept.” 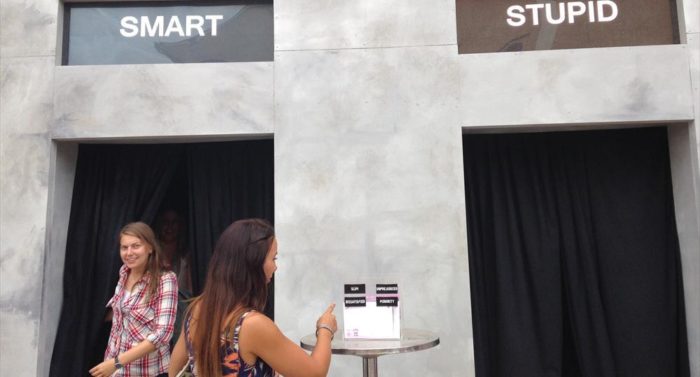 Which side are you on? Abidin’s labels entice curious viewers to explore an installation.Photo: Anna Ruohonen

The pieces shown at Flow Festival were made especially for the festival. “I’ve never been to Flow Festival before; I’m not a big fan of festivals, so this was a great opportunity to do something for a new audience. When you show a piece in a museum, people who go and visit your piece are set in their brain to see art. But when you show a piece at a festival people are not set for it”, Abidin says.

The festival pieces are related to the classic concepts Abidin works with, but he says he lightened them up considering the atmosphere of the festival. One of the Flow pieces was a song, co-written in collaboration with Finnish singer Astrid Swan.

This was a new method for Abidin, who believes that the beauty of doing art lies in challenging oneself: “Before this festival I’d never written lyrics before – I’m bad at music. However the piece turned out exactly as I planned.”

What is life like for international artists in the picture-perfect Finnish landscape at the Arteles Creative Centre?

French American Kevin Kleinmann came to Finland for a Helsinki Festival summer job and ended up founding a record label.