Elo, one of Finland’s top choreographers, has decades of experience dancing and creating ballets for esteemed companies in Europe and North America. His Sibelius premiered in Helsinki in spring 2022, when the Finnish National Ballet marked its centenary.

About four years earlier, the company’s artistic management had contacted him to discuss creating a full-length piece about a historical figure, something special for their 100th anniversary. Jean Sibelius (December 8, 1865–September 20, 1957) emerged as the clear frontrunner.

Just about everyone in Finland recognises certain Sibelius pieces, some of which draw inspiration from the Kalevala, Finland’s national epic. His work was and is perceived as having a symbolic connection with the Finnish national identity and the Finnish landscape, similar to that of contemporaries such as painter Akseli Gallen-Kallela, who was born the same year as Sibelius. 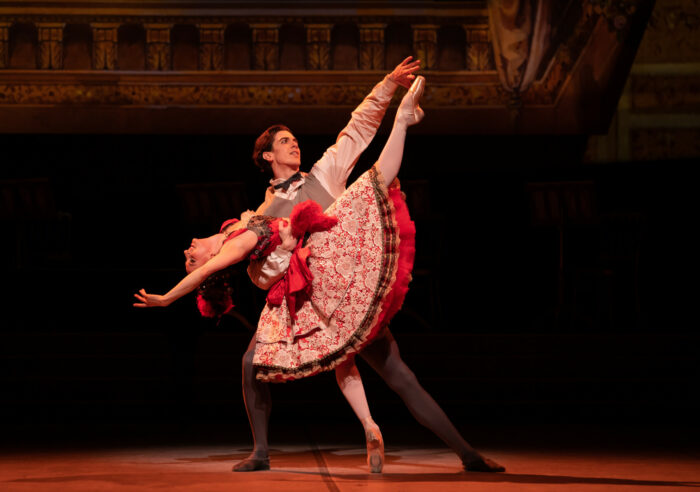 It wasn’t immediately obvious that Sibelius’s compositions would be suitable for telling a story with a combination of motion and music.

When you listen to Sibelius, says Elo, it can at first seem like “this is already too much [for a ballet]. There’s too much nature and colours. There’s a mood to it. Put anything on top of this and it’s just going to ruin it.”

However, his previous experience showed that it could work. Elo used Sibelius’s Violin Concerto in First Flash in the early 2000s, and in 2018 he created a ballet called Fifth Symphony of Jean Sibelius for the Boston Ballet, where he has held the position of resident choreographer since 2005. “I had already done two ballets to his music,” says Elo, “so I felt like I could choreograph to it.”

The resulting two-hour ballet Sibelius holds numerous levels of appeal for audiences. There’s the music, of course; Elo taps lengthy excerpts from many of Sibelius’s most famous compositions to stir viewers’ emotions (except for one Richard Strauss piece, the whole score of the ballet is Sibelius).

There’s the story: we see a young Sibelius meet his future wife, Aino Järnefelt, and follow the ups and downs of their relationship, their family life and, of course, Sibelius’s career.

We witness celebrations, such as a party at the Järnefelt estate or a ballroom full of gaudily clad dancers waltzing in Vienna, where Sibelius studied composing. We see day-to-day life, including births and deaths in the family, arguments, drinking bouts, visits from the in-laws and tense discussions with a debt collector. We catch glimpses of history, such as the Finnish Civil War of 1918, when the family has a brush with death while fleeing to safety.

Sibelius is a biographical ballet, and checks in throughout his life, from childhood to old age. It’s also an interpretation of that life, and of Aino and Jean’s relationship.

They meet and get engaged. Jean travels to Vienna to further his career. Later, the family spends time in Italy. We see Aino and Jean grow. Sibelius’s success develops and his works find an audience, but there are obstacles and setbacks along the way, including his fondness for drinking. 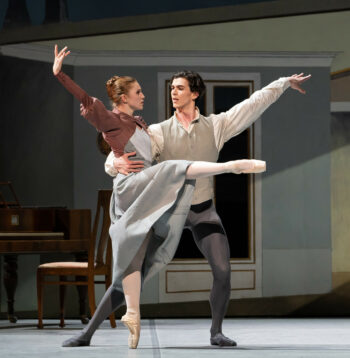 Elo perceives similarities between the jobs of choreographer and composer. Starting with a creative idea, “you do the original process alone,” he says. Eventually, you present it to the dancers or musicians. “I think it’s a beautiful moment,” says Elo, also admitting that it’s a nerve-wracking one. Dancers and musicians are exacting, and may be more difficult to please than the audience itself.

We see this in Sibelius when the composer is leading an orchestra and has difficulty explaining his vision to the musicians. “He was conducting a lot of his own stuff,” says Elo, “so I thought those orchestra rehearsals, facing the orchestra, were important elements to bring into the ballet.”

An unusual additional dimension exists in choreographing a biographical ballet and setting it to music written by the subject of the story. It’s an intense artistic loop, with dance expressions playing out on a background created by a composer who also happens to be the main character.

Not last and certainly not least 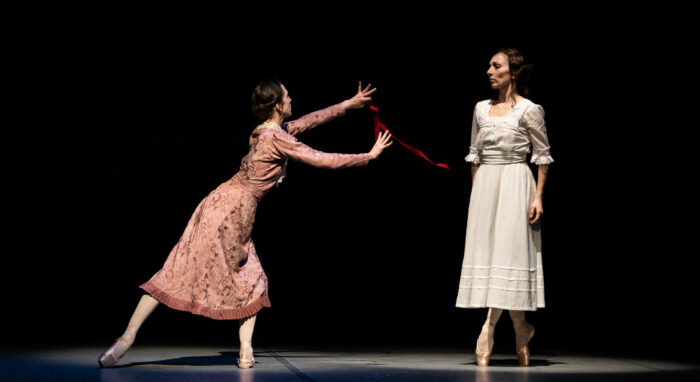 The ballet Sibelius includes a portrayal of how Aino (left, Rebecca King) was affected by the suicide of her sister Elli (Edita Raušerová). Photo: Roosa Oksaharju/Finnish National Ballet

On Sibelius and other productions over the years, Elo has collaborated with his wife, Nancy Euverink. She’s a veteran of the Dutch company Nederlands Dans Theater, where Elo also danced for part of his career.

The program lists her as dramaturgic assistant to the choreographer and as artistic adviser. “We’ve been working as a team on every level,” Elo says.

Throughout the process, they bounced ideas back and forth. She provided feedback on versions of the script and participated actively in rehearsals, sometimes stepping in to explain Elo’s ideas to the dancers when he failed to notice that “there’s no way they can read my mind,” he says.

Perhaps partly because they were working so intensively together, Elo and Euverink didn’t want to downplay Aino’s significance. She had a big role in Sibelius’s life and career, and his story is, by definition, also the tale of the bond between them.

In the ballet, her sister Elli’s suicide contributes to shaping Aino, although “in a lot of books it’s not described as a big event in her life,” says Elo. Integrating it into the performance helped ensure that “her character wouldn’t become secondary,” he says. Both Euverink and Elo felt strongly about this.

Aino is “sometimes right on the edge,” he says, “fighting her own demons.” She and Jean are “figuring out their way together in life.” From time to time throughout the performance, projections show us bits of handwritten correspondence between Jean and Aino, phrases and sentiments that indicate the depth and direction of their relationship. 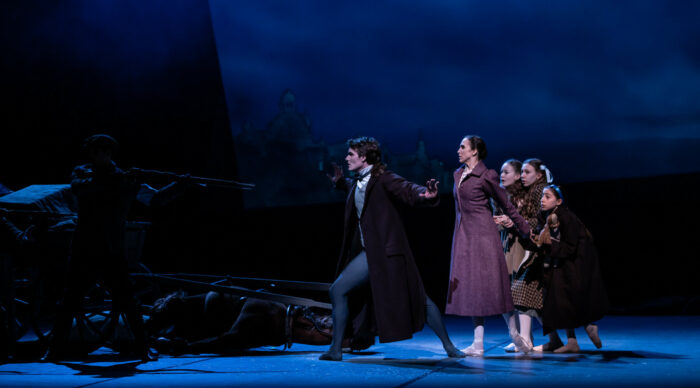 Finlandia, written in 1899 and 1900, is one of Sibelius’s most beloved compositions, closely associated with the heart, soul, dreams and history of the country. At performances, you are extremely likely to see audience members blinking back tears.

In Sibelius, the “Finlandia Hymn” – the nickname for the best-known part of the opus – sneaks up on you in a scene called “The birthday party continues,” late in the ballet. As the chorus of the Finnish National Opera sings in the stage wings, the dancers aren’t decked out in patriotic blue and white. The men wear suits of brown and grey, the women one-tone dresses that are colourful but not bright.

The costumes, choreography and music combine to form an unpresumptuous impression, less pompous than the Viennese waltz and more pensive than the garden parties of Aino and Jean’s youth. We’re in a different era now, much later in Sibelius’s life. In this scene, the choreography makes room for the music to inspire and carry the viewers’ emotions. 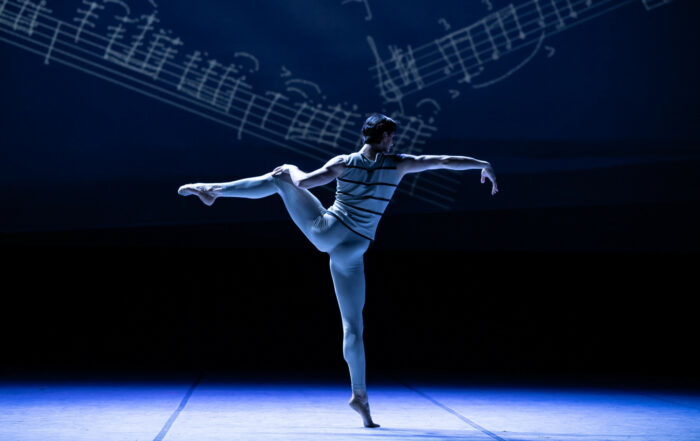 This photo captures one of the eight dancers (Henry Grey in this particular performance) who represent the inner vision and creativity of Jean Sibelius as he composes his Violin Concerto.Photo: Roosa Oksaharju/Finnish National Ballet

One of the most fascinating scenes in the ballet occurs when it switches gears and goes from portraying biographical events to imagining the composer’s creative process. It happens near the end of the first act, in a scene called “Inner vision.”

As the tones of the famous Violin Concerto in D Minor start to play, the ballet goes from literal to figurative. I saw members of the audience sit up straighter in their seats, realising that something unusual was happening. The whole performance veers in another direction, taking the spectators with it.

To visualise this event in Sibelius’s life – composing the Violin Concerto, in 1904 and 1905 – Elo brings out eight dancers (an octave, maybe?) in simple, off-white costumes, sparsely decorated with black lines and shapes that bring to mind music notation. In a projection on the backdrop, handwritten sheet music appears; the concerto is taking shape. 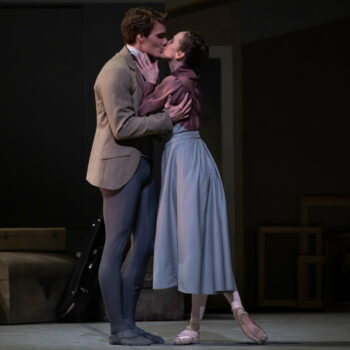 The dancers enter and leave the stage in various combinations, interweaving, gesturing and wavering. They meet, part ways and return repeatedly as the dance deepens. Sibelius himself joins at times and interacts with them, almost as if he’s attempting to herd the notes from his imagination onto the page. The dancers’ vocabulary of movement is now much more modern than in the previous segments.

The scene crystallises with Sibelius standing at the front of the stage, the others stretched in a diagonal line behind him. For a few moments, they remain in this formation. They shift on their legs, while their arms trace sudden, gracious paths in the air, reminiscent of an orchestra conductor.

Sibelius, a violinist, composer and conductor, has managed to impose a kind of order and finish writing his concerto. Elo’s own artistic efforts have succeeded in making the process of composition come alive for the ballet audience.

A short time later, Sibelius stands alone in the beam of a spotlight, both arms raised as if indicating a crescendo – or expressing triumph.