A grand villa in the National Romantic style, Hvitträsk was home to three architects who created many of Helsinki’s architectural treasures.

Sometimes you need to go beyond the big museums to find the real treasures. Step into the home of a renowned musician, architect, artist or national hero.

In and around the Finnish capital, the homes of historically prominent artists, architects and other cultural figures offer scenic settings and insight into artists’ lives. Here are our top choices. 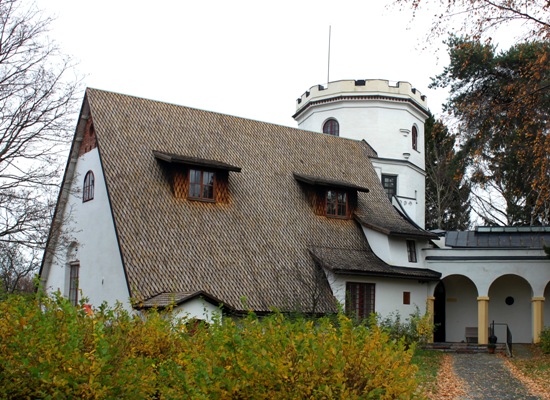 A visit to Tarvaspää, the castle-like home and studio of Akseli Gallen-Kallela (1865–1931), one of Finland’s foremost painters and graphic artists, becomes a trip to the very roots of the National Romantic style and the Finnish cultural awakening. Located on a hill overlooking a bay outside Helsinki, the house faces a beautiful forest-flanked sea view like something out of a Gallen-Kallela painting.

Gallen-Kallela himself designed the house, drawing on the Finnish National Romantic style and castles on the Continent. Stairs lead from a spacious atelier filled with natural light to a tower with views over woods and water. Some of the rooms have been preserved in their original state, and it’s easy to imagine Gallen-Kallela in his heyday entertaining groups of painters, writers and politicians. 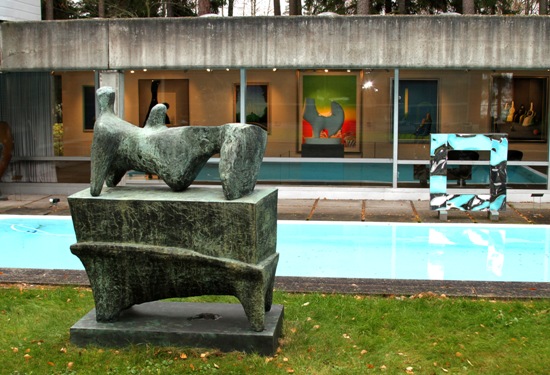 Founded by Danish businessman Gunnar Didrichsen (1903–1992) and his wife Marie-Louise (1913–1988), the Didrichsen Art Museum hosts one of the most fascinating private collections of modern art in Finland, including Finnish artists as well as Picasso, Kandinsky, Léger, Miró, Moore, Giacometti and Arp.

Situated just outside Helsinki on the island of Kuusisaari, Villa Didrichsen was designed by architect Viljo Revell to harmonise with the surrounding landscape and offers a magnificent view of the water. The garden is filled with sculpture – the biggest Henry Moore collection in the Nordic countries is casually divided between the yard and the living room. The museum also hosts Finland’s only collections of pre-Columbian and oriental art.

Didrichsen Art Museum
On the map 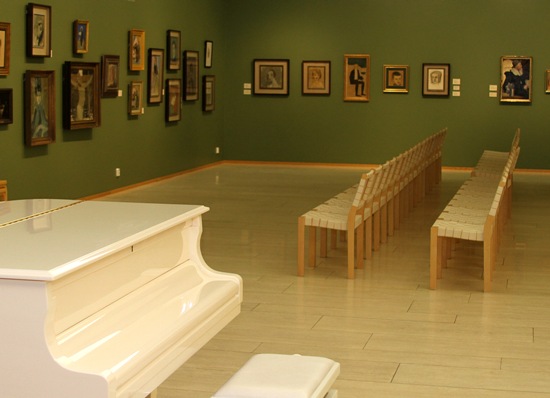 Just up the road from the Didrichsen, the Gyllenberg Art Museum contains one of the country’s most extensive private art collections, an impressive selection of Finnish and foreign works.

The former home of banker and art collector Ane Gyllenberg (1891–1977) and his wife Signe, Villa Gyllenberg is situated on Kuusisaari just west of Helsinki. Part of the family’s home has been preserved, with the furniture and paintings as they were during the Signe and Ane’s lifetime. The dining room is decorated with 16th- and 17th-century masterpieces by Titian, Tintoretto and others, while the sitting room is mainly dedicated to Finnish artists of the Golden Era.

The new extension, added in 1955, contains gallery space and one of the largest Helene Schjerfbeck collections in private ownership. Occasional Sunday concerts are also held there. The upper floor, where the couple’s bedroom and Ane’s study were located, now hosts special exhibitions.

Gyllenberg Art Museum
On the map 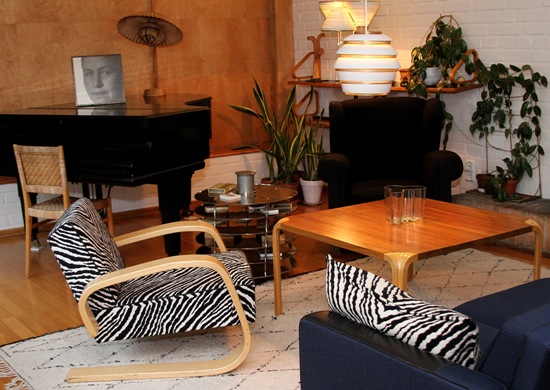 The former home and studio of internationally renowned architect and designer Alvar Aalto (1898–1976) offers a treat for anyone interested in his functionalist style or a chance to peek into the life of Finland’s most famous architect. Designed by Aalto himself and built in 1936, Aalto House forms a unique architectural jewel that very few people had the chance to see when he and his family still lived.

The building, located in the Helsinki neighbourhood of Munkkiniemi, opened to the public in 2002 and experiences a constant stream of Finnish and foreign visitors.

The light-bathed atelier and the decor are almost unchanged. The distinct shapes and colours of Aalto vases, lamps and chairs are everywhere, highlighting the cosmopolitan atmosphere.

Aalto House
On the map 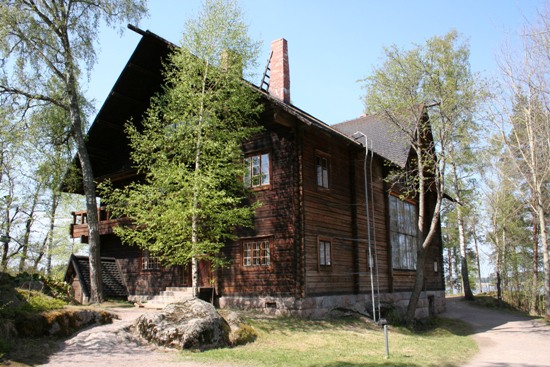 The wilderness studio and home of Finnish painter Pekka Halonen (1865–1933) showcases the life and work of this beloved artist of the Golden Era.

Halonen was a master portrayer of Finnish landscapes and people, and looking at the countryside around Lake Tuusula it’s easy to see the source of ideas and inspiration that helped him develop his distinctive style. Halonen himself designed the humble yet graceful timber house that came to be known as Halosenniemi (Halonen Point). Inside, the house is spacious and light, with Halonen’s paintings prominently displayed.

Halosenniemi Museum hosts various theme exhibitions showcasing Halonen’s art side by side with the work of his contemporaries and that of later generations of artists.

The beautiful route along Lake Tuusula used to be a real creative hub, where a number of Halonen’s contemporaries also maintained homes or studios; many of which are open to the public today. The most famous is undoubtedly Ainola, the home of composer Jean Sibelius, situated only a stone’s throw away.

Halosenniemi Museum
On the map 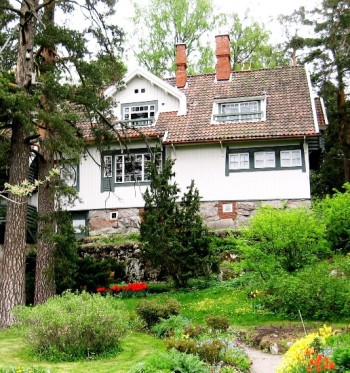 The humble Ainola, home of the great Finnish composer Jean Sibelius (1865–1957) and his family, took many of his famous guests from abroad by surprise – they probably expected a castle. But the quiet house on the scenic shores of Lake Tuusula in Järvenpää gave the composer the peace and quiet he needed for his creative pursuits, far from the diversions of the city, while other artistic families living nearby provided a lively social circle.

Lars Sonck designed the timber-built National Romantic building, where Sibelius composed some of his most important works. 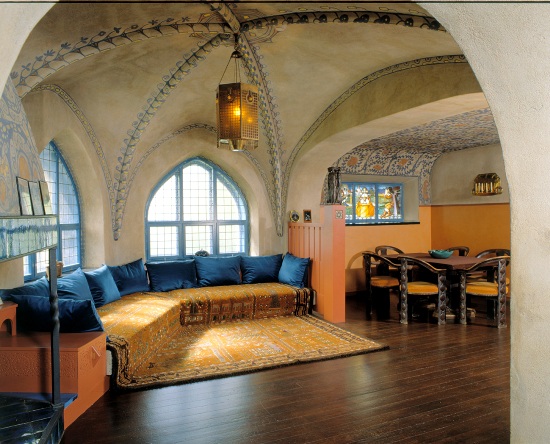 A grand villa in the National Romantic style, Hvitträsk is the birthplace of many of Helsinki’s architectural treasures. At this location in Kirkkonummi near the Finnish capital, the celebrated trio of architects Herman Gesellius (1874–1916), Armas Lindgren (1874–1929) and Eliel Saarinen (1873–1950) drew up plans for Helsinki Railway Station, the National Museum of Finland and other projects.

Built between 1901 and 1903 out of logs and natural stone, the main building served as both an architectural office and a home. Guests included such esteemed figures as composer Jean Sibelius, artist Akseli Gallen-Kallela and Russian writer Maxim Gorky. Hvitträsk also became the boyhood home of world-famous architect Eero Saarinen, Eliel’s son, who went on to a stellar career, primarily in the US.

Hvitträsk (closed Jan–Feb)
On the map 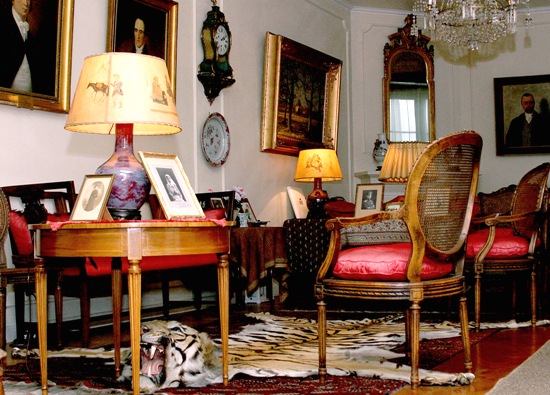 The former home of Carl Gustaf Emil Mannerheim (1867–1951), who served as military leader and President of Finland, now operates as a museum. It depicts his career and showcases his European and Asian travels and collections of art from significant Finnish painters. Situated in the Kaivopuisto district of Helsinki, the house offers a remarkable sea view.

With the exception of a few rooms converted for exhibition purposes, the home has been preserved in its original state. After the grandeur of the downstairs dining room, sitting room and library and the welcoming cosiness of the guestrooms, the bedroom is surprisingly spartan. It is the room of a soldier, containing only necessities, the view from the window the only visible luxury.

Guided tours of the museum are available in seven languages, providing insight into Mannerheim’s life and Finland’s history.

Mannerheim Museum
On the map