All kinds of fans converge on Helsinki every summer for Tuska Festival, one of Europe’s longest-running heavy metal events.

Finland is the heavy metal country, with more than 53 metal bands for every 100,000 inhabitants – more than any other nation in the world.

But which Finnish city is the most metal metropolis? A website called Capital of Metal proposes to answer that question, or rather to let the bands and their fans provide the answer, because they’re the ones whose opinions matter. Finland might be the only country where metal music and its creators enjoy such a high level of appreciation, respect and, well, let’s just say it out loud: love.

Bands are going online to add themselves to a map of Finland. They also get to tell the world about themselves and their hometowns, in their own words. The organisers, who include Helsinki’s renowned Tuska Festival (the name can be translated as “agony”), Sony Music Finland and music shops such as Musamaailma and Record Shop X, hope that between May 9 and June 20, 2018, as many as possible of Finland’s thousands of metal bands will check in and put themselves on the map.

Those thousands of groups, and heavy metal music in general, have incalculable hordes of fans throughout the land – and across the globe. Metal enthusiasts from all countries can visit the Capital of Metal website to “like” their favourites. (Full disclosure: Capital of Metal is also supported by the Ministry for Foreign Affairs, which produces ThisisFINLAND.)

And there are prizes. When all is said and sung, winning the Capital of Metal title is about more than just bragging rights: that city gets its own stand at Tuska Festival, a prime opportunity to show the world why they won and cement the reputation of their municipality and its musicians. [Editor’s note: The winner is the southeastern town of Lemi, with a population of 3,076 and 13 metal bands, meaning that there are 42.26 bands per a hypothetical 10,000 people. The runner-up, the eastern city of Joensuu, posted an impressive 177 bands, but with a population of 75,848, the number of bands per 10,000 people only reached 22.34.]

The bands who tagged the map entered a draw for music shop gift certificates, while the fans who frequent the site had a chance to win a trip for two to Tuska, complete with VIP access. (See our interview with the winners here.) 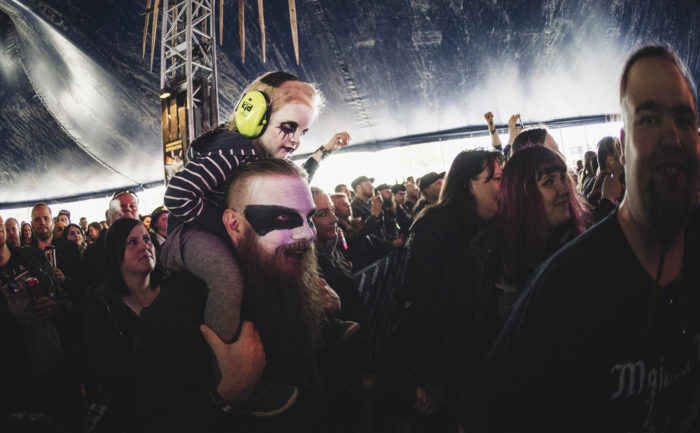 Metal music has officially bridged the generation gap in Finland, where there are more metal bands per capita than any other country in the known universe.Photo: Jesse Kämäräinen

Putting aside the raw stats about how many metal bands Finland has, there does seem to be something in the Finnish mindset – or maybe in Finnish society or in the clean forest air, or even in the education system – that allows heavy metal music to flourish. Or maybe it’s all of the above, and more. We’re not the first to notice – this isn’t even the first article on this website to mention it (see links below).

One Finn who is eminently qualified to explain is Toni-Matti Karjalainen, who currently serves as a research fellow at Aalto University’s School of Business in Helsinki, where his specialties include management of music and culture export. A multidisciplinary academic with degrees in design and economics, he’s also the driving force behind an annual event called the Modern Heavy Metal Conference, which started in 2015 and, by no coincidence, is held in Helsinki the same week as Tuska Festival.

Presentation topics at the conference have included “Why focus on Finnish heavy metal for research in philosophy of music?,” “Exodus to the ‘promised land of heavy metal’: How an international presence has impacted the metal scene in Finland,” “Death/doom metal as part of Yorkshire, England,” “Folk metal as heritage music: An example from Java” and “Finnish mythology in heavy metal.”

Karjalainen has travelled the globe attending metal concerts and interviewing fans, and he’s had a chance to think about what Finnish metal means to the rest of the world, and vice versa.

“Tonally, the Finnish language fits very well with the metal environment,” says Karjalainen, and makes a rhythmic noise to demonstrate. Finnish is a “consonant-driven” language, he says, and “fits well with the other instruments.” Anyone who has tried to learn Finnish has noticed the proliferation of double consonants.

Many Finnish bands sing in English, of course, but “if a band sings in Finnish, it’s weird, unique and sort of exotic” for foreign listeners. Karjalainen looked at the audience when Mokoma and Stam1na, two bands who sing in Finnish, played their first concerts in Japan, and, surprisingly, “the whole front row was singing the lyrics out loud.”

According to Karjalainen, the lyrics in question “are not very self-explanatory, even to a Finnish speaker.” If Finnish metal music can motivate fans to learn, by heart, lyrics that they can’t comprehend, it speaks volumes about the appeal and pull of the music.

Going beyond the rhythm of the language, other factors have allowed Finnish metal to grow, and may have helped shape its sound, although there is no one single Finnish sound. The term “heavy metal” covers a seemingly limitless list of genres and subgenres: black metal, doom metal, folk metal, glam metal, goth metal, melodic death metal, power metal, pagan metal, speed metal, symphonic metal and more.

There’s Finnish nature, referring to the natural environment of Finland, and there’s the nature of the Finns, meaning their personality and society. All of this contributes to Finnish metal music.

“Over and over again, if you talk with the artists,” says Karjalainen, they mention that musicians who grow up in places where winter is marked by long nights and severe weather tend towards “melancholy chords.” If you’re a teenager with a guitar, “you don’t start forming a new salsa band.” While this line of discussion risks running afoul of stereotypes about Finland, “it probably holds true on a general level,” he says.

It’s common to hear Finnish designers and artists mention how they are influenced and inspired by the natural world – Finnish forests and lakes, and materials such as birch wood – and this also comes up when talking about metal music. More than 70 percent of Finland is covered by forest, and a similar proportion of Finnish metal album covers feature bands posing in forests.

Musicians don’t wish to be stereotyped, however, and Finnish groups often gain recognition for their individuality “in terms of concepts or technical know-how,” says Karjalainen. Nightwish and Children of Bodom are two bands that enjoy such acknowledgement and played an important role in paving the way for other groups when Finnish metal really took off during the late 1990s and early 2000s.

Finnish society has also played a part in allowing metal to develop. All types of music have benefitted from the inclusion of music education in Finnish primary schools. “If you talk to people who work in the music industry or play in the bands, they’ll say that this did have an influence on the overall acceptability of music, because most young people have tried an instrument at some point,” says Karjalainen. “You sense a positive atmosphere towards music in our country.”

While metal is “not necessary regarded as mainstream” in Finland, he says, it hasn’t been perceived as anti-establishment, either. Finnish society has greeted the metal scene with a degree of acceptance better than that of many other countries, where heavy metal may be forced into an underground existence. It is still a subculture – not every Finn is a metal music expert – but it’s a large subculture.

Within the metal scene, too, there is far less infighting between subgenres than in many other nations. “Everybody’s happy and we’re friends,” says Karjalainen.

Checking his email in early June 2018, a Brazilian student named João Vieira couldn’t believe his eyes: He’d won the Capital of Metal contest. He and a friend would go to Finland to attend the Tuska Open Air heavy metal festival in Helsinki.

Finnish city of Tampere declares itself sauna capital of the world