When film director Elina Hirvonen decided to make “Boiling Point,” a documentary about the unfolding migrant situation in Finland, it took less than 12 months from idea to premiere.

In 2015, European countries received record numbers of asylum seekers fleeing Syria, not to mention Afghanistan, Iraq and others. The situation grew to dominate headlines, and Finland was no exception.

In the first four months of 2015, the Finnish Immigration Service received 1,354 asylum applications. In the last eight months of the same year, 31,123 applications were submitted. Although far from the totals seen in many other countries, the volume caught authorities off guard.

This situation formed the background for novelist, journalist and documentary filmmaker Elina Hirvonen’s decision to temporarily abandon her other projects and start a film about the unfolding migrant situation in Finland. Boiling Point even-handedly lets people from all viewpoints have their say. The audience witnesses demonstrations for and against migration and hears from Finnish people with a wide range of perspectives. It also follows several asylum seekers as they navigate life in Finland.

For Hirvonen, the idea became clear in early February 2016. “I woke up one night after reading news about petrol bombs and thought, why is nobody making a film about this?” she tells me. “And then I just thought, OK, why don’t I do it?”

The whole spectrum of what’s happening 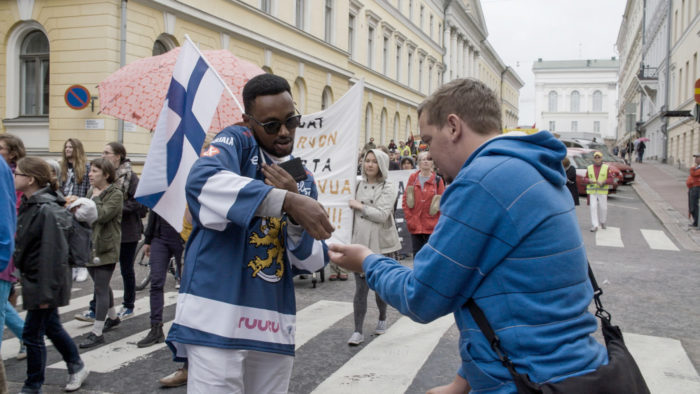 At a demonstration, an activist who is also a dedicated ice hockey fan lends someone some change.Photo: from “Boiling Point,” produced by Mouka Filmi

In the incident she’s referring to, a man in his mid-20s threw five bottle bombs at an asylum seeker reception centre in Petäjävesi, a 4,000-person municipality in central Finland. No one was injured.

The attack fit into what Hirvonen had noticed about public discourse over 2015: “It was rapidly changing in an increasingly aggressive direction,” she says. “At the same time, I felt…like people were living in completely different worlds in terms of how they saw what was happening.”

She didn’t make Boiling Point to express her personal views, which she has already done as a writer. Her goal was “not to interpret,” she says, “but to leave the audience space to think for themselves, to show the whole spectrum of what’s happening.”

She sought out people from all walks of life, including villagers in Petäjävesi, activists and many others. “I decided to have the attitude that I’m open to talking with anybody,” she says. “No matter what they say at the demonstrations, they’re all human beings who have some kind of background and life story and experiences.”

One person who appears in the film is Jarkko, a photographer with anti-immigration political views. “Even though I disagree with him, I felt I understood where he’s coming from and I respect him,” says Hirvonen. “You have to respect the people you’re filming.” 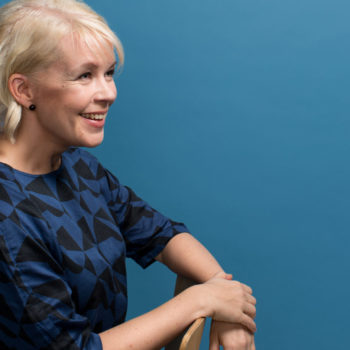 Elina Hirvonen didn’t make “Boiling Point” to express her personal views, she says, “but to leave the audience space to think for themselves.”Photo: Carl Bergman

From idea to premiere, production lasted less than 12 months. There’s a certain universality; a similar film could probably have been made in most European countries in 2016.

Boiling Point elicits strong reactions. Before a showing at Helsinki’s DocPoint Festival, Hirvonen told the audience, “I’ve noticed that the film raises a lot of feelings and questions, including critical ones. I just want to prepare you for that.”

In order to encourage real off-screen dialogue, the documentary was made available free of charge, via a link, to anyone who wanted to screen it as a public or private event between February and May 2017. The Boiling Point website’s advice page for post-screening discussion says, “The goal isn’t to achieve a common viewpoint, nor is it to argue other people into silence…If everyone talks and listens, everyone’s understanding increases.”

About 750 screenings happened at community centres, churches, libraries, schools, universities, cafés and restaurants all over Finland. People held events across Europe, not to mention the US, Canada, Peru, Turkey, Afghanistan, Malaysia and Japan. The movie has been seen in Kaamanen, in the Finnish far north, and in Brisbane, on the east coast of Australia. 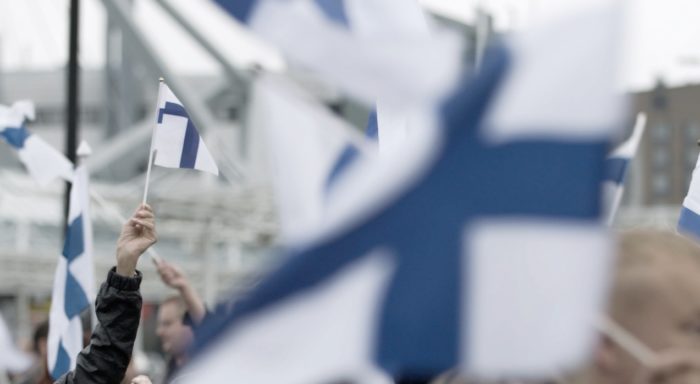 Many different groups use the Finnish flag as a symbol.Photo: from “Boiling Point,” produced by Mouka Filmi

What kind of dialogue has developed? Hirvonen has attended various screenings, one of them in Petäjävesi, the town that experienced the bottle bombs. About 60 people showed up, including a refugee family that appears in the documentary. The mayor hosted the discussion.

“It felt like it was…therapeutic for some of them, because their [previous] year was so intense, like most small towns in Finland that took refugees,” says Hirvonen.

“This one woman said she doesn’t really have any strong opinion, but they have to find a way to get along with each other.” She meant the refugees and the Finns, but also the Finns and the Finns – the natives of Petäjävesi.

A similar pragmatic sentiment is expressed in the film. Two of the main characters offer living proof that it is possible to disagree and still remain friends. Oula is a historian whose area of expertise is fascism. Tapsa is a businessman who worries about how refugees might affect Finland. 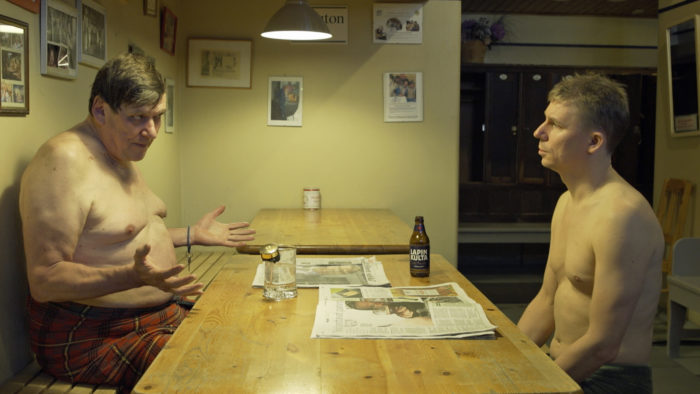 Tapsa (left) and Oula, here in conversation over a post-sauna drink, remain friends despite their diverging views about politics.
Photo: from “Boiling Point,” produced by Mouka Filmi

They have their conversations at the public sauna, of course. Two guys sitting in a sauna talking politics – could there be anything more Finnish? Wrapped in towels, bare-chested, they discuss their views over a post-sauna drink.

“What if we Finns started talking to each other respectfully?” asks Oula. “It doesn’t mean we have to agree about everything.”

Hirvonen returns to these two repeatedly throughout Boiling Point. “A glimpse of hope comes from the idea of Oula and Tapsa in the sauna and the idea of being able to continue the conversation even though they don’t agree,” she says.

Tapsa, Oula and others interviewed in Boiling Point attended a special premiere prior to the public release. In a question and answer session after a DocPoint screening, Hirvonen recounted the experience.

“I had been more afraid of that than I’ve ever been of anything,” she said. “But in the end everything went well, and somehow people starting talking with each other and found some common wavelengths. So that was encouraging, because I think that everyone else was also terribly apprehensive beforehand, knowing that the group included people with widely differing positions.”