This sport is not for the faint-hearted: Racing along on skis, pulled by reindeer over a frozen lake in Finnish Lapland.

Day at the races: These reindeer spring from the starting gates, towing “jockeys” who are wearing skis.

This is not a sport for the faint-hearted: Racing along on skis, pulled by semi-wild reindeer galloping at more than 50 kilometres per hour over a frozen lake in Finnish Lapland.

The winter reindeer racing season in Finnish Lapland culminates in the King of Reindeer race event held in Inari, 350 kilometres north of the Arctic Circle, at the beginning of April, when Lapland’s forests and lakes are still covered with a thick blanket of snow and ice.

“This annual event is one of the highlights of the year for reindeer herders from all over Lapland, and for the village of Inari,” says Anne Ollila, head of the Finnish Reindeer Herders’ Association. “More than 1,000 people come to watch the races every year, since they are the final big competition of the three-month reindeer racing season.”

Almost 200 reindeer are brought to Inari to run in three competitions for animals with different levels of racing experience: a general category for beginners; a “hot” category; and the King of Reindeer category, run over two days.

A warm social event in a frozen location 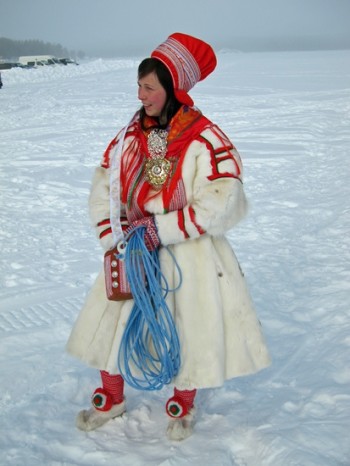 Elen Anne Sara is wearing her traditional Sámi costume and carrying a blue rope to use in the lasso-throwing competition.Photo: Fran Weaver

The races take place on courses of one to two kilometres marked on the frozen, snow-covered surface of Lake Inari, and results are timed to the hundredth of a second. Reindeer owners trot with their animals on the lake before the race to warm them up, then coax them into starting gates.

Clad in streamlined ski suits and helmets, the jockeys stand on skis behind the reindeer. These reindeer have actual reins, and the jockeys hold on tight to keep the animals from veering off course. High-speed falls are not unusual. At the finish line they let go of the reins, allowing the exhausted reindeer to rejoin the others in a paddock.

Ollila explains that, most importantly, the races give reindeer-herding folk from around this vast, sparsely populated region a chance to get together socially. “There isn’t any official betting on the races, but I can’t say what goes on in the bars,” she says. Inari’s two bars certainly do a roaring trade during the event, and lively debate arises about the merits of the four-legged, two-antlered athletes.

Many of the reindeer owners are indigenous Sámi people, and some competitors come over the border from Norway. 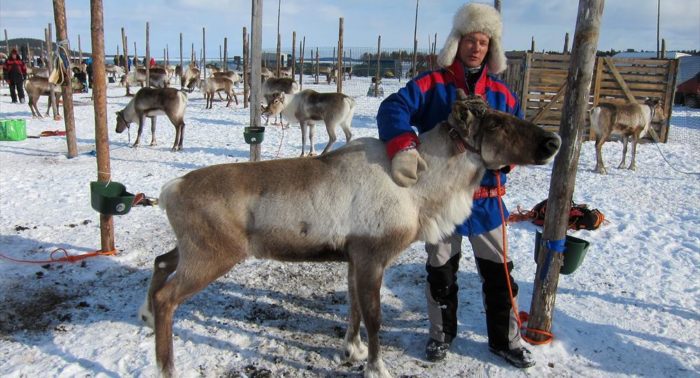 Ari Niittyvuopio gives his reindeer, Dat Lea, a pep talk in the paddock before the race.Photo: Fran Weaver

At the races I meet Ari Niittyvuopio from Karigasniemi, who owns two-time champion reindeer Dat Lea (the name means “That’s it!” in Sámi). I ask him what makes a good racing reindeer. “The reindeer we use in races are five-to-ten-year-old males,” he explains. “When we watch our reindeer on the mountains, we notice which ones look big and muscular. I think the darker reindeer are tougher, and a good racing reindeer should also be just a bit crazy!”

Dressed in colourful, traditional Sámi costumes, sisters Elen Anne Sara and Magreta Sara have come from their remote farmstead home to participate in the women’s lassoing competition – and to cheer on one of the family’s reindeer, Isomus, in the big race.

“I shouldn’t have worn my costume, because it cramped my lassoing style,” says Elen Anne with a smile. She learned to lasso reindeer as a child, and still helps her family during reindeer roundups, taking a break from her main job producing Sámi-language schoolbooks.

Though Isomus has the second-fastest time from the first day of the King series, he loses his nerve during his final two-kilometre run and only finishes 13th overall. His cheering fans are not too dismayed. “The main thing is that the races are fun,” says Elen Anne. “It’s always a pleasure to come to Inari and see everyone.”