One of very few species of freshwater seals in the world, Finland’s Saimaa ringed seal is an iconic and rare animal in danger of disappearing from the face of the earth.

Somewhere on Lake Saimaa in southeastern Finland, a roly-poly, healthy-looking seal sprawls out on a rock by the shore. At times the seal scratches its neck with its front paw or rolls from one side to the other. But mostly it just basks on the rock. Sometimes it is joined by another seal, which does what its companion is doing – not much of anything.

This spectacle of Saimaa ringed seals (their Finnish name is saimaannorppa) hooked people in May 2016 when WWF started streaming it via webcam as Norppalive. Returning in 2017, it consists of a wildlife camera broadcasting real-time video from a rock popular among the seals.

“People experienced Norppalive as soothing,” says WWF communications officer Joonas Fritze. “Even though seals weren’t always visible on the rock, just the beautiful natural environment of Lake Saimaa produced a zen-like feeling. Sighting a seal was the icing on the cake.”

The immensely popular Norppalive webcast goes online again in May and June. This time, the seals’ reality TV is also being streamed abroad via an English-language website (link below). 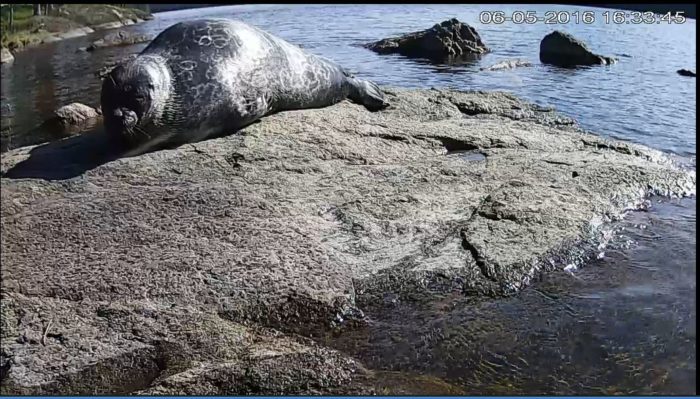 This seal, nicknamed Pullervo, showed up to delight Norppalive viewers in the service’s inaugural year.Photo courtesy of WWF Finland

“The goal of Norppalive is to raise people’s awareness of the Saimaa ringed seal and its life, and to increase the desire to protect it,” says Fritze.

The greatest threats to the Saimaa ringed seal are fishing net deaths and climate change.

“Fishing is highlighted more because it is easier to influence than climate change,” says Petteri Tolvanen, a programme director at WWF.

Statutory and voluntary fishing restrictions have improved the situation of the Saimaa ringed seal, but even so, the number of seal pups living to reproductive age is not as high as it should be. Pups die in nets and certain kinds of fish traps, where they get stuck and drown. Adult seals also die in fishing tackle.

During the month of Norppalive streaming in 2016, more than 120 people pledged on the WWF website to give up net fishing on Lake Saimaa. This represented a huge addition, as 240 had already pledged in the previous two years. Donations on behalf of the Saimaa ringed seal also increased. 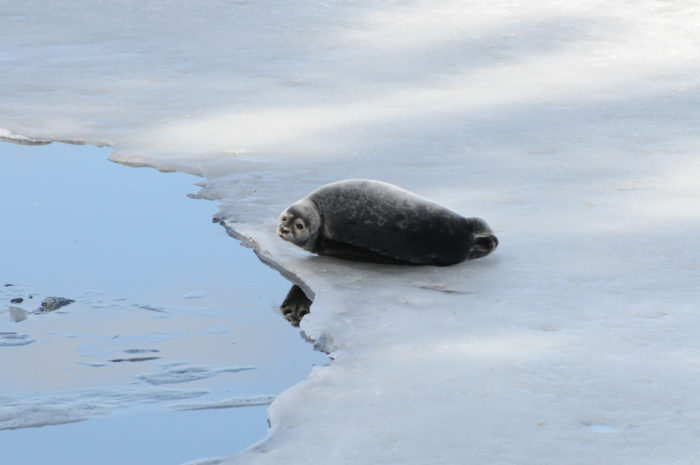 All means of protecting the Saimaa ringed seal are necessary. Thanks to decades of conservation efforts, the seal population has gradually risen from 150 to 360 individuals, but this is still far from a viable population.

“The Saimaa ringed seal remains highly endangered,” says Tolvanen. “The official interim goal is 400 seals by the year 2025. Then extinction would no longer be an immediate threat, but even that is in no way adequate.”

The population is estimated annually on the basis of seal births – the more accurate the birth count is, the more precise the population figures are. In spring 2016, 86 seal pups were born, a number greater than any year in the previous three decades. In 2017, the corresponding figure is 82.

The pups are born in late February. Net fishing restrictions to protect Saimaa ringed seal pups are in force in the seals’ key habitats from mid-April to the end of June. The use of certain types of fishing tackle is prohibited throughout the year.

The fishing restrictions are opposed by a small but vocal group.

“I’m glad that people’s wish to protect the Saimaa ringed seal through fishing restrictions is greater in areas populated by the seal than elsewhere in Finland,” Tolvanen says. 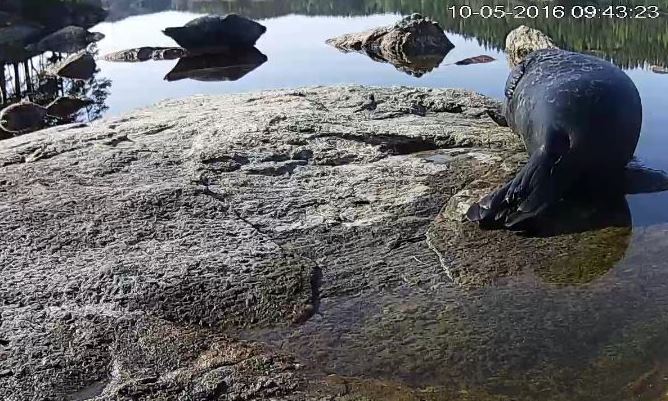 The Norppalive camera has a peaceful, zen-like influence on viewers, who watch the seals basking in the sun.Photo courtesy of WWF Finland

If climate change is not checked, future prospects for the Saimaa ringed seal are bleak.

The seals need snow and ice to survive. The female seal builds her nesting lair in a snowdrift – it’s safe to give birth there, and the pup stays dry and warm. However, winters with little snowfall are becoming increasingly common.

“In the future, there may be winters when we don’t even have ice [on the lake],” Tolvanen says. “In bad winters, pup mortality can reach up to half of all births.”

Fortunately, people can pile up snow into snowbanks that can act as nesting sites for the seals. In the winter of 2014, when there was very little snow, more than 90 percent of the season’s seal pups were born in nests built in human-made snowdrifts.

Even if you don’t live close enough to help build nesting sites for the Saimaa ringed seals, you can still follow them and participate in conservation efforts online. The Norppalive webcam link is right here. And as the WWF website says, “Chances are it will be the cutest Finn you’ll ever see.”

By Tiina Suomalainen, May 2017