Mikko Uimonen, a firefighter by profession, spends his spare time in January piling up snow to serve as den sites for Saimaa ringed seals.

Snow falls gently on the frozen surface of Lake Saimaa, the country’s largest lake, as a blue dawn breaks over eastern Finland. Mikko Uimonen grabs a broad snow shovel known as a “snow pusher” and uses it to pile up deep snowdrifts by the rocky lakeshore.

At first it’s hard to imagine why anyone should take on such a herculean task, but Uimonen and his fellow volunteers are working for a good cause: they’re helping the Saimaa ringed seals, endangered freshwater seals that live in the labyrinth of bays and islands that make up the lake. Their total population is estimated at 360.

As breeding season approaches, the workers are piling up man-made snowdrifts in which the seals can make dens to raise their pups. During winters with little snow, pup mortality rates can rise steeply.

In late January more than a hundred snow-shovelling volunteers work at locations around the vast frozen lake. Most of them are locals, like Uimonen, dedicated to helping their aquatic mammalian neighbours. “To help the seals, all you need is a shovel and plenty of energy,” he says. “It’s rewarding to think that by doing this we can help preserve Lake Saimaa’s seals for future generations.” 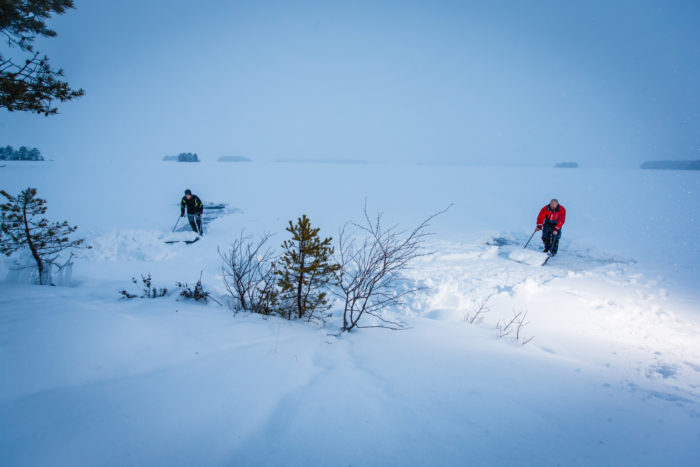 Mikko Uimonen (right) and his brother, Esa, push snow off the frozen surface of the lake to help provide for the Saimaa ringed seals.Photo: Mikko Nikkinen

Uimonen piles up further layers of snow on the new man-made snowdrift, occasionally beating the surface to make it harden before adding the next layer. The seals need snowdrifts almost a metre (39 inches) deep for their winter dens. Because of climate change, suitable natural snowdrifts have been in short supply during recent winters, so the seals need a helping hand from willing volunteers.

It’s not worth piling up snowdrifts just anywhere on the lake. Anyone keen to help must contact the experts at Parks & Wildlife Finland, a division of Metsähallitus (literally “forest administration”). They coordinate this work, assisted by the University of Eastern Finland and WWF Finland.

The artificial snowdrifts have been well used by the seals. In the winter of 2014, when there was very little snow, they proved crucial for the breeding seals, since more than 90 percent of the pups born that winter were raised in dens in the man-made snow piles. “The seals don’t mind at all whether the snowdrifts are natural or man-made,” says Uimonen.

In recent times more than 60 seals have been born each year. The number jumped to 86 in 2016, but only time will tell whether that was an anomaly or the beginning of a trend.

Local pride in the lake and its wildlife 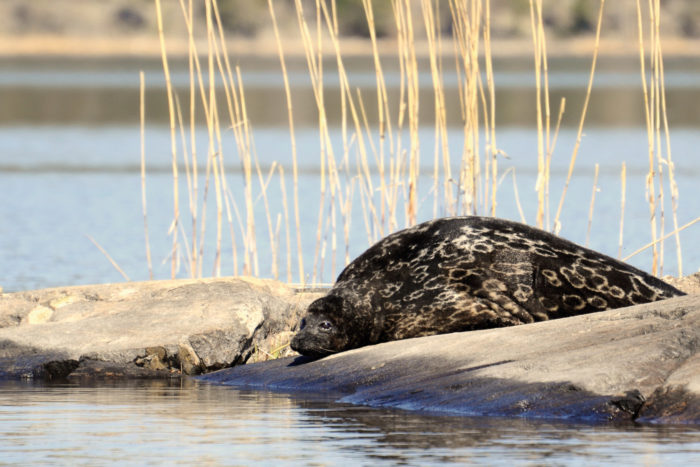 Warmer weather will eventually arrive, and when it does you may see a Saimaa ringed seal basking on a rock, showing off the pattern of its pelt.Photo: Teuvo Juvonen/ Vastavalo/VisitFinland

Lake Saimaa has been important to Mikko Uimonen throughout his life: “Ever since my childhood I’ve always lived just a stone’s throw from the lake. As a small boy I often went out fishing with my dad and my uncles. I first encountered the lake seals on those trips.”

In the 1990s Uimonen made many long winter ski treks on the lake, pulling his survival gear on a sled behind him. On one of these treks he first met the well-known nature documentarist, writer and photographer Juha Taskinen. Much of Taskinen’s work has focused on Lake Saimaa and its wildlife – especially its unique seals. The tales Taskinen tells have made a deep impression on Uimonen.

“His stories have really inspired me,” he says. “It’s fantastic that we have a great lake like this – and such special seals to share it with. We’re really privileged to be able to live here.”

After these encounters Uimonen volunteered to help out with research conducted by the University of Eastern Finland examining the behaviour of Saimaa’s seals. He has assisted the scientists with many practical issues, enabling them to concentrate on their research.

“Though Saimaa’s ringed seals have been studied quite a lot, they’re still enigmatic animals, and there’s a lot about their underwater world that we don’t fully understand,” he says. 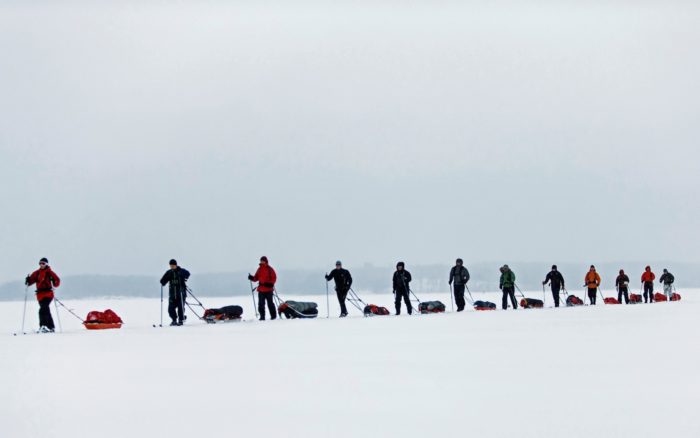 A group of ski trekkers crosses part of Lake Saimaa, pulling their gear on sleds behind them.Photo: Mikko Nikkinen/VisitFinland

For Uimonen, who works as a firefighter, Lake Saimaa most of all represents a place to relax and forget any worries. “Though I know the lake quite well, it’s still full of surprises,” he says. “It has so many little bays and inlets that even a whole lifetime isn’t enough to explore them all.”

He particularly likes to explore Lake Saimaa during the winter. “It’s so tranquil here in wintertime. There’s usually no one on the ice except for the odd skier or fisherman – and the colours of nature are simple and pure, with white snow, clear ice and dark grey rocks. I find it deeply moving.”

Uimonen doesn’t seem to mind the biting wind and the way the bitter cold infiltrates and freezes your fingers. “Those sensations make you feel really alive!” he says with a laugh.

The pale midwinter sun is sinking towards the horizon by the time Uimonen and his mates stop piling up the snowdrifts. But this isn’t the end of the project. When winter starts turning to spring, Uimonen goes round the potential breeding den sites to count how many of them have been occupied – and how many new pups have been raised safely thanks to the volunteers’ work.

Close-to-nature Finland has seven natural symbols, including a national fish, a national tree and even a national insect.