Back from the brink: The unique Saimaa ringed seal appears to be making a comeback although danger persists in the form of thoughtlessly placed fishing nets and global warming.

Finland’s largest lake, Saimaa, is home to the world’s rarest seal. Our reporter embarks on a seal safari to catch a glimpse of an animal that seems to be returning from the brink of extinction.

The Saimaa ringed seal forms the icon of Finland’s nature conservation movement, and has become an attraction for visitors to Finnish Lakeland. It has even inspired an opera at the famous Savonlinna Opera Festival (see box below).

As the 12-berth wooden cruise-boat Kaesa leaves Savonlinna in eastern Finland for an overnight seal-spotting voyage, Lake Saimaa’s forest-fringed waters are as calm as a millpond. Though conditions are good, sightings are far from certain, since only about 310 seals live in the 4,400 square kilometres of this vast, labyrinthine lake system. But just before sunset someone shouts “Seal!” and we rush to the railings to spy a dark, whiskered head bobbing in the water. We watch as the seal repeatedly dives for fish and returns to the surface.

Our guide, nature photographer and filmmaker Juha Taskinen, explains that Saimaa’s seals are a distinct inland variety of the ringed seal, a species found in arctic seas. They adapted to their freshwater habitat after the lake and its inhabitants became cut off from the Baltic Sea some 9,000 years ago. 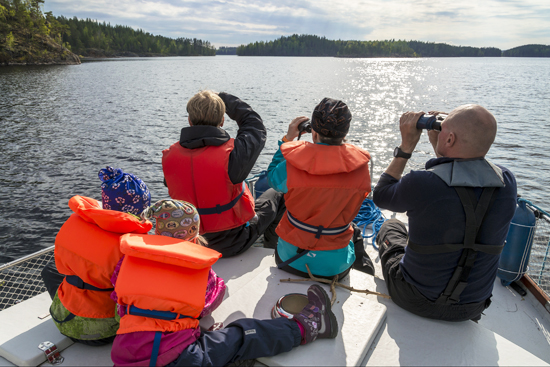 Seal seeking: Guests on a Lake Saimaa seal safari search the surface of the water for signs of seals.Photo: Markku Tissarinen

Taskinen is a dedicated conservationist, but back in the 1940s his grandfather used to hunt lake seals, since fishermen saw them as competitors. “By the 1950s, when they first received protected status, there were probably fewer than 100 left,” he says. “Industrial pollution also affected the seals, but today the lake water is practically clean enough to drink.”

In recent years the seals’ numbers have risen, but they are still listed as critically endangered. “The greatest threat they face today is fishing nets, since their pups can easily get entangled in nets and drown,” says Taskinen. In recent years about 50 to 60 pups have been born each winter, but every year several perish in nets. A recent ban on the use of nets in some of Saimaa’s waters in springtime has helped, but Taskinen would like to see nets prohibited all year round in all of the seals’ waters.

Most of Saimaa’s commercial fishers use equipment that does not endanger the seals, but many local residents and holiday-home owners still put out nets. Taskinen explains that seal-friendly fish traps designed and distributed by conservationists can work just as well as nets, but some local fishers remain reluctant to change their tackle. 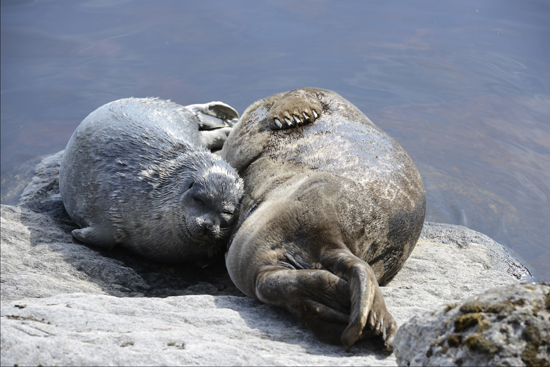 A seal pup (left), whom researchers have given the name “Kimmo,” basks in the sun beside its mother.Photo: Juha Taskinen

Climate change represents another potential threat. “Mother seals raise their pups in snow dens on the frozen lake. In winters in the early 2000s there was too little snow and many pups died. But researchers and volunteers have sometimes helped the seals by piling up man-made snowdrifts along the shores where they breed. The seals have happily used these snowdrifts to make breeding dens,” explains Taskinen.

A five-year, EU-funded programme called Safeguarding the Saimaa Ringed Seal launching in August 2013 intensifies such successful conservation actions, promotes research into seal behaviour and runs awareness-raising campaigns. Research findings will be used to plan further measures such as the protection of lakeshores against holiday home developments. Studies of radio-tagged seals have already proven that they range over surprisingly long distances searching for fish.

Conservationists hope the seals’ numbers will keep rising steadily to about 400 by 2025. “That should be enough to remove the imminent threat of extinction, though with such a small total population they will remain vulnerable to disease outbreaks,” says Taskinen.

“Since they are the only animal found only in Finland, the loss of Saimaa’s seals would be a national shame. Since it is the actions of people that have endangered them, we surely have a moral obligation to save them,” he adds. “I’m quite optimistic overall though, since people clearly want to see them survive, and a lot of good things have been done in recent years to help them.” 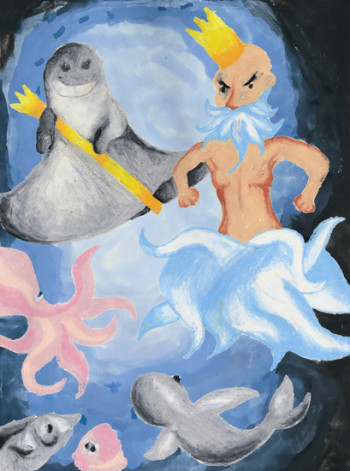 The internationally renowned Savonlinna Opera Festival reverberates each summer in a splendid medieval castle in the heart of Finnish Lakeland. The 2013 programme included a special children’s opera featuring the region’s most famous natural inhabitant, the Saimaa ringed seal.

Norppaooppera – The Seal was produced by composer Timo-Juhani Kyllönen and librettist Iida Hämeen-Anttila with help from local schoolchildren, who dreamed up its storyline and also created designs for costumes, stage sets and posters. It premiered in July 2013.

Leading Finnish opera singers performed in roles including Lumi the Seal and Molly Mollusc, accompanied by the festival’s children’s and youth choir. The storyline examines the problems that Saimaa’s seals could face if the winter ice cover of their lake disappears due to climate change.