A Helsinki kiosk with 91 kinds of salmiakki candy draws customers who just want to try it or who can’t get enough of it.

Erkki Korhonen runs Salmiakkikioski, a kiosk dedicated to the Finnish speciality salmiakki. The salty liquorice candy enjoys a vast fan base in Finland and attracts tourists as well.

A Helsinki kiosk is devoted entirely to salmiakki, selling 91 varieties of the salty liquorice candy that holds a special place in Finnish hearts. Warning: Salmiakki can be addictive.

The Finnish speciality salmiakki has been known to divide opinions – many love it, but others can’t stand the taste. Salmiakki consists of black liquorice spiced with ammonium chloride – not the same stuff used in cleaning solutions, of course, but a kind of salt that gives the candy its pungent signature taste.

Besides Finland, the other Nordic countries and the Netherlands are also known to relish salmiakki. People from other parts of the world may experience culture shock when they taste the especially strong Finnish version.

Vintage kiosk for a vintage taste 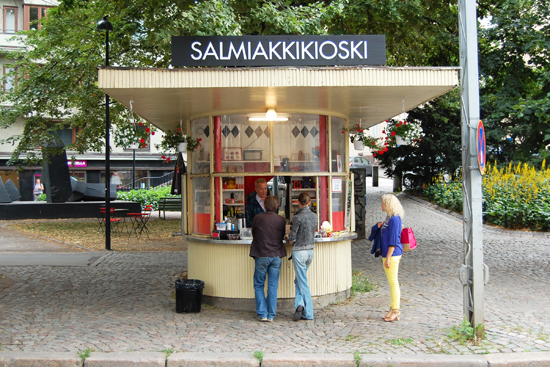 Housed in an old-fashioned kiosk with a visor-shaped roof, Salmiakkikioski draws a steady stream of customers. Photo: Emilia Kangasluoma

Salmiakki used to be known mostly as a type of sweet sold in soft or hard drops and lozenges, or as a powder. Lately the magic ingredient has found its way into other sorts of goodies, as a tasty addition to chocolate, ice cream and even barbecue sauce. However, the popularity of traditional salmiakki sweets has not decreased – on the contrary. Helsinki’s Salmiakkikioski, a kiosk specialising in the stuff, forms a good example of salmiakki’s perpetual popularity.

Erkki Korhonen, who runs the kiosk, says that he wanted to specialise in something in order to make it stand out, and salmiakki represented an easy choice because of its vast fan base in Finland and status as a Finnish speciality for tourists –Finnish and foreign travellers alike. “People from northern Finland have called us and made arrangements to visit our kiosk as part of their Helsinki sightseeing tour,” says Korhonen.

Many locals have also thanked him for maintaining the vintage kiosk. It’s a lippakioski, a kiosk with a roof that juts out in front, making it look a little bit like a baseball cap (lippa means “visor”). These kiosks date back to the mid-1900s, and fewer than 20 of them survive in Helsinki.

Korhonen stocks all the best-known brands of salmiakki, and then some. “Many people ask for ‘salmiakki that you can’t get anywhere else’ or want the strongest kind available,” he says. 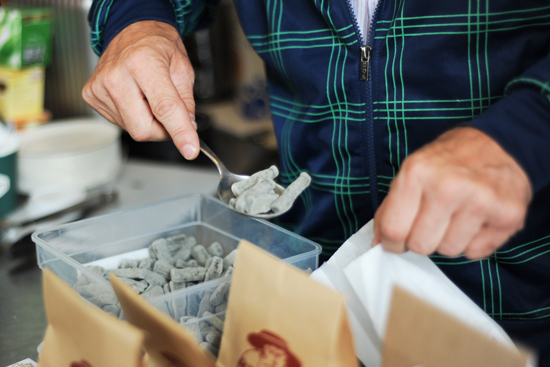 Out of the kiosk’s 91 kinds of salmiakki, 31 must be bagged and weighed by hand.Photo: Emilia Kangasluoma

Just when Korhonen is explaining that many people buy salmiakki to take it abroad, a lady comes in to pick up a present for an upcoming trip to visit relatives in Italy. Many Finns living abroad miss salmiakki. Luckily many online stores sell it nowadays, although their selection is unlikely to be as large as Korhonen’s Salmiakkikioski.

Many tourists are brought to the kiosk by their Finnish hosts and according to Korhonen they often are amazed by how many types of salmiakki are available: “Many tourists have heard the name ‘salmiakki’ before but have not tasted it before – and when they do, the most common word to describe it seems to be ‘interesting.’” Korhonen’s business partner Pete Neuvonen tells of a group of around twenty Chinese tourists who bought salmiakki and sat down at the tables to taste it – about half of them spat it out, while the other half became instant salmiakki converts. Korhonen adds that many Finns serve salmiakki to their unsuspecting foreign friends just to see what will happen.

Neuvonen prefers his salmiakki straight, but knows various ways salmiakki can be mixed. “People put salmiakki powder in espresso coffee, yoghurt and all sorts of pastries – and we’ve even heard of someone making salmiakki-strawberry jam.” However you use it, and whether you love it or hate it, salmiakki offers an unforgettable taste.