When the winter brings lots of snow, Helsinki is perfect for a favourite pastime: sledding. We help you head for the hills.

A snowy winter inspires fun-seeking Helsinkians to get out their sleds and get outdoors.

Winter in Helsinki sets the stage for a favourite pastime: sledding. Here’s how to get the most out of your journey down the urban slopes.

Helsinki inhabitants often spend much of their winters shaking their heads at forecasts of slush and sleet, but sometimes their hometown is cast into a tourist-brochure winter. During snowy spells, newspapers run photos of locals skiing next to trams in the city centre.

Seemingly endless heaps of snow may become a source of stress during morning commutes, but they also turn the city into a downy, almost surreal playground on weekends: Dog-walkers, cross-country skiers and ice-fishing enthusiasts take to the sea when it is frozen, and many others visit the city’s parks, whose snow-covered hills serve as perfect sledding slopes. 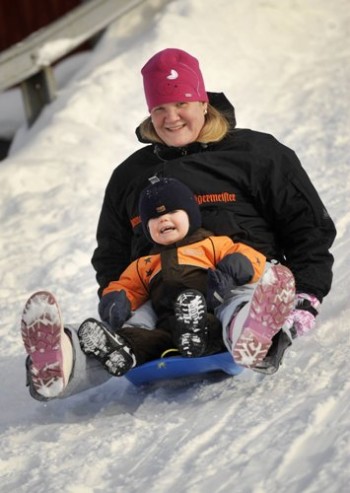 Keep your feet off the ground as you slide on the slope. Photo: Vesa Moilanen/Lehtikuva

The hills of parks such as Kaivopuisto, Central Park, Sinebrychoff Park and Kaisaniemi Park become speckled with sleds ranging from red to neon green. You can see everything from steerable Stigas to small, round, one-person sleds that are little more than small sheets of plastic with single handles (known as liukurit, sliders, in Finnish).

Shrovetide (Laskiainen in Finnish), a holiday signifying the start of Lent in the Christian tradition, is connected with Shrove Tuesday, which – curiously enough – is devoted to sledding in Finland. And while many of us might deem sliding down a hill on a plastic tray an activity best practiced by children, the traditional sledding event is open to all.

Whether you’re a first-timer or you’re making a long-awaited return to the city slopes, here are a few things to keep in mind.

Wear the right clothes: Even if your pea coat is able to withstand a few trips down the hill, your jeans won’t. Dress for sledding like you would dress for the ski slopes, prepared to have snow push its way into your gloves and up your legs. 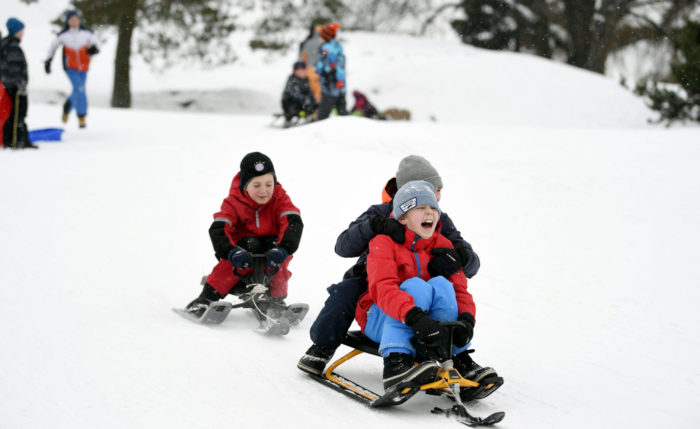 It may not be an Olympic luge competition, but sledding will still give you an adrenaline rush.Photo: Antti Aimo-Koivisto/Lehtikuva

Test out different models: A bulky, square-shaped plastic sled (ahkio) offers a steadier experience than a liukuri, which requires the user to hold his or her legs up in order to avoid a violent spray of snow in the face. A steerable Stiga sled, meanwhile, offers a larger degree of control (it even has brakes), but isn’t built for an adult frame and can easily tip over.

Practice your technique: Although sledding is pretty self-explanatory, maintaining balance at high speeds can be more difficult than it looks. Don’t let your feet dangle; keep them inside the sled or lifted off the ground. Cramming two passengers into one sled can actually ease the process, evening the weight of the sled and grounding it.

Prepare to get wet and tired: It may seem obvious, but for every breezy ride down the hill, there is also the mandatory climb up in deep, slippery snow. Also, keep in mind the first rule of sliding etiquette, if only to not look foolish in front of the kids: Go off to the side before climbing back up the hill, rather than ascending through the middle where you are in danger from sleds travelling at high speeds.

Treat yourself: Since sledding tends to result in soggy clothes and physical weariness, you’ll appreciate a close proximity to a café where you can warm up afterwards. Sinebrychoff Park is near the restaurants and coffee houses of the Boulevard, while the slopes at Kaivopuisto are only a stone’s throw away from seaside Café Ursula. And after a few treks up the hill, a laskiaispulla (a Shrovetide pastry filled with marzipan or jam, with whipped cream for good measure) will hardly feel like a vice.