Shrovetide starts a slippery slide towards spring in Finland

Nowadays Finns enjoy Shrovetide on sledges and skis. Many communities and schools organise their own Shrovetide events with outdoor activities and eating outdoorsy food such as grilled sausages.

When Finnish people say, “Liukasta Laskiaista,” they are telling you to have a “Slippery Sledding Day!” And that’s a good thing, because every Finn wants to have a good slide down a fine snow-covered hill during the festive days of Shrovetide.

Shrovetide comes around six weeks before Easter. In the Catholic and Orthodox Christian traditions, it is celebrated during the three days before Ash Wednesday – which marks the start of Lent, a 40-day fast (eating very light food) before Easter. However, in Finland after the Reformation, folks no longer fasted, but many Shrovetide traditions continued, because people thought that following these customs would have a positive influence on their income.

During Shrovetide, work with sharp instruments was discontinued.  Household chores were stopped in the afternoon or not done at all. Women would cease spinning linen. People would concentrate on eating fatty, heavy food. In fact, it was considered a good thing to show off the grease on your hands and on the corners of your mouth. It was believed that the more fatty foods you ate, the fatter the pigs would become, and the more milk the cows would produce. 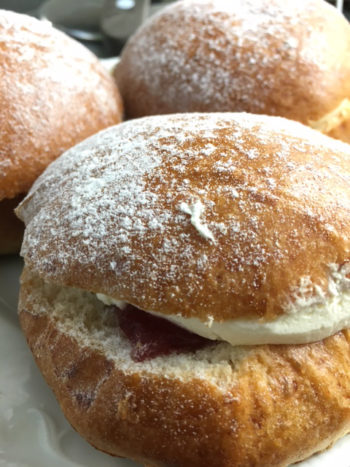 Laskiaispulla, a Shrovetide bun, is the king of the season’s feast. There are two camps passionate about the filling of the pulla. One thinks marzipan (almond paste) is the one and only proper filling for the bun, whereas the other camp believes in strawberry jam. You have to choose your side, otherwise you can’t have a proper laskiaispulla conversation.Photo: Tiina Krook

Other Shrovetide traditions included a tobogganing event. The farther you could sled, the taller your flax would grow, and the bigger your rutabagas and turnips would become. As always, a sauna was prepared to enjoy during this time. Nonetheless, it was important to be silent in the sauna, otherwise you could be plagued by lots of flies and mosquitoes during the next summer. Moreover, there was an old proverb about the weather. “If the sun is shining on Shrovetide, it will be a good year. If it snows on Shrovetide, it will snow every day until Easter.”

Most of these foods are still popular today. Although the star of the day is the beloved Shrovetide bun, laskiaispulla, a sweet pastry filled with almond paste or strawberry jam and lashings of whipped cream. Something most Finns cannot resist, and taking seconds or thirds is certainly not uncommon. To wash all these heavy morsels down, Finns drink coffee or hot cocoa.

Fests for families and friends 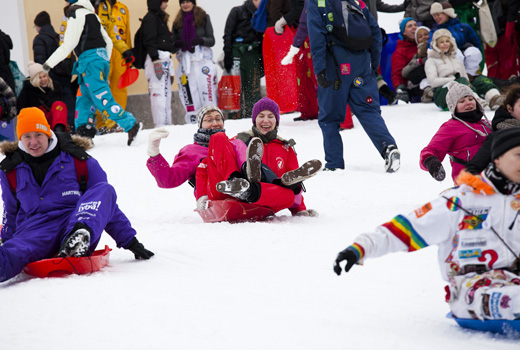 Students make the most out of the Shrovetide festivals, putting together a boisterous programme of sledding competitions, music, barbequing, drinks and wild partying in the snow. Laskiaisrieha at Tähtitorninmäki in Helsinki is one of the biggest student events of the year in Finland.Photo: Ylioppilaslehti

These days, Finns generally observe two days of this festival: Shrove Sunday and Shrove Tuesday. Shrove Sunday is often a family day full of sledding, ice-skating and cross-country and downhill skiing. On Shrove Tuesday, people flock to the nearest hill after work or school. Sometimes, schools organise a special fun day for pupils in the lower grades.

Student organisations often put together a boisterous programme of sledding competitions, music, barbequing, drinks, and wild partying in the snow. Even cities get into the act by putting together winter carnivals with snow play, parades, kids’ activities, snacks and concerts.

Shrovetide is meant for people of all ages and all walks of life.  So, should you happen to be in Finland during Shrovetide, I will wish you a Slippery Shrovetide with perfect snow and sunny skies! And don’t forget to have pea soup and a Shrovetide bun!