Sitting stoically in a piping-hot room has formed a central part of Finnish culture for thousands of years.

The Finnish Sauna Society carries a reputation as the devoted nurturer and maintainer of the sauna tradition that Finns hold so dear. We look inside this exclusive yet modest club just outside Helsinki.

The Finnish Sauna Society acts as the self-appointed steward of Finland’s cherished sauna culture, promoting all aspects of sauna heritage for Finns and foreigners. If Finland can be said to have an official sauna, then the society’s meticulously maintained sauna complex is it.

Located just west of Helsinki alongside a secluded bay on the island of Lauttasaari, the premises contain three traditional smoke saunas (more about these later), two more conventional saunas with wood-fired stoves and an electric “city sauna”. The building also houses an exhaustive collection of sauna-related literature, including research into the health benefits of saunas and details of technical innovations in sauna design.

To visit, you normally need a personal invitation from a member, but special sessions for small groups are sometimes arranged. “We wouldn’t like for foreign visitors interested in Finnish saunas to leave the country thinking that the hotel’s electric sauna was the real thing!” laughs Hilkka Heimonen, the society’s former executive director.

Around 3,800 people hold membership, but the Sauna Society remains quite exclusive, as newcomers have to be recommended by two long-term members. The schedule is divided into different days for women and men; women form almost a third of the members. 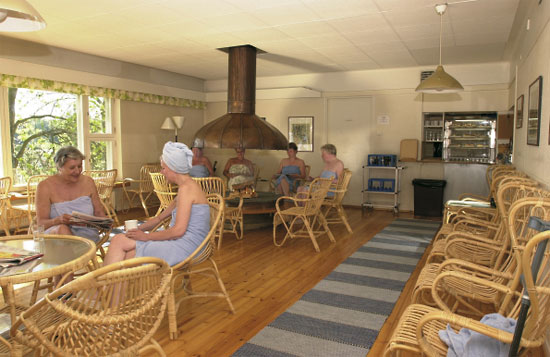 Archaeological evidence indicates that sitting stoically in a piping-hot room has formed a central part of Finnish culture for thousands of years. As if to prove that sauna has Finnish roots, “sauna” is the only Finnish word widely borrowed by other languages. Today this country of 5.5 million boasts about three million saunas.

Heimonen describes a “real Finnish sauna” as a well-ventilated room with wooden walls, heated to 80–95 degrees Celsius by a wood-fired stove, with somewhere to wash nearby – and preferably a scenic lake in view. Optional extras include a bundle of leafy birch twigs, with which brave bathers slap against their skin to improve circulation.

The Sauna Society emphasises that saunas don’t endanger your health. “The fact that almost all Finns have saunas regularly should reassure people,” says Heimonen.

“You shouldn’t have a sauna if you have a cold or fever, and people with weak hearts shouldn’t go straight from a hot sauna into a cold lake, but recent research shows that saunas are actually beneficial for some heart problems,” Heimonen adds.

Centre of the action 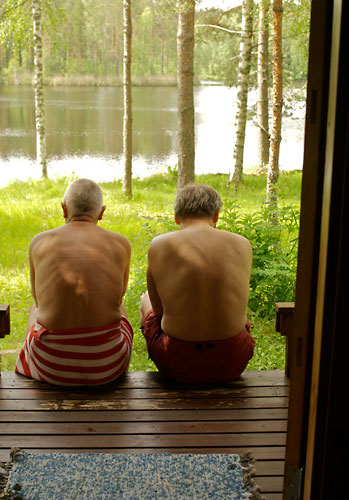 “Saunas used to be at the centre of every aspect of people’s lives in Finland,” says Heimonen. “For earlier generations they were the only place to wash. They were also used to smoke fish and meat, wash clothes, and dry linen.” Life used to begin and end with a sauna: It was the cleanest place for women to give birth, and the bodies of the deceased were also washed there.

“Today people see saunas as a place to relax, both physically and mentally,” Heimonen says.

Almost everyone in Finland has access to a sauna. In rural areas most homes still have saunas with wood-fired stoves. Apartment blocks typically have electric saunas where families have their own scheduled hours. Neighbours get a chance to gossip at weekly communal male or female saunas. Being together in the altogether can encourage otherwise reticent souls to expose their innermost selves as well as their naked exteriors.

Heimonen notes that in spite of their doubtful reputation in some of the world’s seedier cities, saunas have no sexual connotation in Finland. Finns of all ages fail to see why so many people immediately associate saunas or simple nudity with sex.

Why does the Sauna Society maintain so many saunas? People like different temperatures. The hottest reaches an infernal 130 degrees Celsius.

Afterwards I chill out with a dip in the cool waters of the tree-fringed bay and a drink in the society’s café-lounge. It’s hard to believe that this peaceful place lies just a few miles outside Helsinki.

Return of the smoke sauna

For many purists, the only true sauna is a smoke sauna, deep-heated for several hours using sooty smoke. Before use, it must then be ventilated and cleaned to ensure that no one is smothered by fumes or smeared with soot. Everyone in Finland seems to agree that smoke saunas have softer and somehow more soothing vapours. 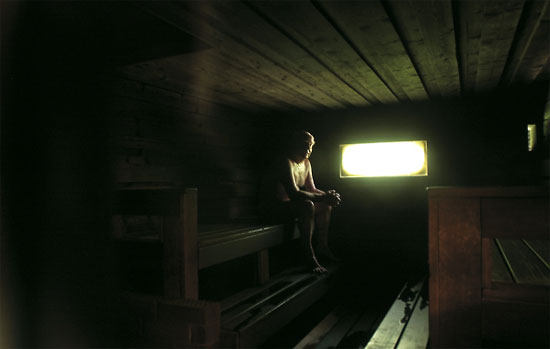 Smoke saunas, preferred by many purists, are hard to maintain and almost disappeared in the late 1900s, but now they’re all the rage again.Photo: Seppo Pukkila/Sauna Society

The Sauna Society’s official sauna stoker, Seppo Pukkila, has just stripped off when I meet him, as he’s gasping for a sauna himself, having just finished the arduous task of preparing all the saunas for the two o’clock opening time.

In the middle of his endeavours, one of the sauna walls had almost burst into flame. Luckily he noticed a tell-tale wisp of smoke and could hose down the smouldering log joint in time. “The joints of the wooden buildings that house smoke saunas can easily combust spontaneously as the vapours rush through tiny cracks, so you have to keep a very close eye on them,” he explains.

Mainly because they are so laborious to heat, smoke saunas almost disappeared towards the end of the 20th century, but now they are all the rage again. They form a popular part of many tour and conference programmes.

Setting the world aright at the “ladies’ sauna”
Life & societySociety

Setting the world aright at the “ladies’ sauna”